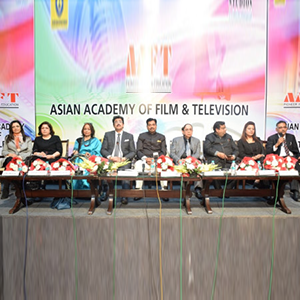 Noida “We are actually creating a new World Record in film and television education as there is no film school which has so far launched 106th batch of trainees, we have done it today. These students are witness to the history,” said Dr. Sandeep Marwah President of AAFT- Asian Academy of Film And Television on the inauguration of 106th batch at Marwah Studios, film city Noida.

Krishan Guptaa Managing Director of Organic Wellness Private Limited, Tedex Speaker and writer of book ‘Clear Your Bottle Necks’ shared his part of story and motivated the students to work hard and keep learning in the capacity of Chief Guest of the day.

“I have seen best of the film and television schools of the country but no one teaches you better than AAFT. It has the best infrastructure and facilities to make you a better media person,” said Joy Shree Arora former Dean AAFT and renowned film and TV actress.

“There is no alternative to hard work. When students have a motivator and mentor like Sandeep Marwah, there is no chance of failure left with the students. I suggest you to please follow Dr. Marwah,” said V.S.K. Sood Managing Director of Top Rankers Management Consultants.