Maintaining‚ what can possibly be the highest tutor to taught ratio of 30:55 in the world‚ the only ISO certified world renowned Asian Academy of Film & Television, now also affiliated to The City & Guilds of UK making all of its courses automatically recognised in more than 100 nations the world across, the Academy has taken another major leap forward by announcing its program to establish a full fledged Academy of fine arts at a high powered seminar attended by the best of fine arts personalities from whole of India last Sunday here.

patrons Padma Bhushan Ram Prasad Sutar‚ president of Noida artistes association Sumanava Suba Seth & Mr.Sandeep Marwah
The idea is another brainchild of the academy’s founder director Prof. Sandeep Marwah for whom passion and excellence for fine arts by any human being is an intrinsically integrated vision for his or her desire to become an outstanding artiste on the big or small screen. No wonder his initiative drew an unbelievably spontaneous‚ unequivocal and exciting participation from most the nearly 50 top practising artistes in the field of sculpturing‚ painting‚ poetry‚ music‚ dance drama and theatre from all across, in the country. With patrons like Padma Bhushan Ram Prasad Sutar‚ presient of Noida artistes association Sumanava Suba Seth and hoards of other leading the race to bless the initiative‚ the stage was now set for Noida to establish another outstanding academy of world standards for fine arts including all logistics support required to make it as grand a success story as the AAFT. The meet was specially graced by Atul Marwah of the M.E.C. Art Gallery. 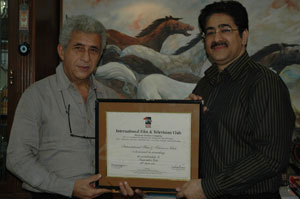 TWO TIMES National Award winner and recipient of Padma Bhushan, renowned actor Naseeruddin Shah met all the young acting students of Asian Academy of Film and Television at Marwah Studios. “Acting is an art, the more you do, more perfect you are the next time,” said the veteran actor in his deep impressive voice.

“The actor has to keep himself fit and intact all the time for the right opportunity,” he emphasised. Shah was there at Marwah Studios to give his shots for the film directed by AS Bedi on a patriotic subject.

“It is our honour that one of the veteran and perfect actor of the Indian film industry, Naseeruddin Shah was here among us to express his ideas on acting.
Other Articles by Asian Academy Of film And Tv TV Bahu Sakshi Tanwar in Gurbir Garewal’s next film Marwah brings films and spirituality together Michael J Fox at Marwah Studios AAFT’s annual function ‘Images’ concludes Tim Langford inaugurated Entity an art exhibition. He has performed in more than 250 films,” said Sandeep Marwah, while introducing him to the students. Naseeruddin has given some of the best films of Bollywood. His best known and remembered films include Manthan, Godhuli, Albert Pinto Ko Gussa Kyon Ata Hai , Aakrosh, Sparsh, Hum Panch, Woh Saat Din, Masoom, Mandi, Jane bhi do Yaron, Ardh Sathya, Paar, Sarfarosh etc.

“Naseeruddin Shah who has been rated as the perfect actor of Indian film industry has passion for theatre as he has love for cinema,”added Sandeep Marwah. Shah met all the senior staff of the institution including course director Prof Harshvardhan; dean AAFT; dean Asian School of Media Studies, Suman Bajaj Kalra; and Latika Sahani dean Asian Business School.

The Ministry Of Information And Broadcasting, Government Of India in association with ASSOCHAM is going ahead with the preparation for showcasing the changing face of the Indian Film and Cinema at the 62nd Film Festival at Cannes ,France by setting up the Official Indian Pavilion at the Village International from 13th May to 24th May 2009 .The committee has been formed to promote Pavilion of Indian Film Industry ,

The feature film Coffee House is ready for release presented by Shivkala Motion Picture in association with Marwah Studios and GTV International, produced by Mahim Mittal, Sandeep Marwah and Krishan Kumar.The film is written and directed by President Award Winner Gurbir Garewal who has written and directed number of Super hit TV serials.

“The film covers social objectives and highlight different family problems” said Gurbir Garewal at the press conference at Mumbai.” It was a very humble start when my friend Gurbir narrated the subject to Mahim Mittal in my room we all decided to go ahead with feature film, keeping in mind it is so important to tell people the truth of the society”, said Sandeep Marwah of Marwah Studios and Founder of Film City Noida. “I found that this can be the best way to combine the cast and crew from Delhi, Noida and Mumbai. “The film was shot in record time.” added Marwah.