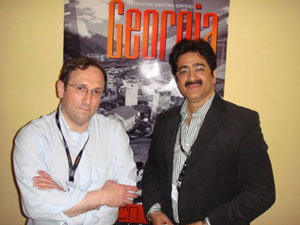 62nd Cannes Film Festival has proved a wonderful platform for Indian Film Maker Sandeep Marwah to announce a joint ventures with the film makers of Georgia when he was invited by the Minister of Cultural, Monuments Protection and sports of Georgia Nicholas Rurua to Georgia to look for himself the growing demand of film and TV business in their country.
Sandeep Marwah the president of Marwah Studios and Director of First private film school of India, Asian Academy Of Film And TV (AAFT) offered student exchange, faculty exchange programs along with the joint ventures to produce short film with the film and TV students of Georgian film School when he was representing India in the meeting of International delegates held by the Georgian Minister Nicholas Rurua at 62nd Cannes Film Festival at Majestic Hotel. Marwah offered scholarship to the students of Georgia to come to India to learn about Indian Film Industry to strengthen the relation between two countries.
“It is very necessary to take initiative to invite important film makers from Georgia to India to develop new relationship between two countries. Films are the best way to exchange culture.” said Sandeep Marwah, who is the World record holder of producing largest number of short films.
“We are very keen to join hands with Indian Film Industry, which is largest in the World and exchange programs and education with Marwah Studios is the right start.” Added Nicholas Rurua.
.
The meeting was also attended by Konstantin chlaidze the General Director of Georgian National Film Centre, David Vashadze the manager Research and Development, Georgian National Film Centre, Guka Rcheulishvili, the film maker from Georgia and many others including Archll Menagarishvili , Dy Director , Georgian Films. 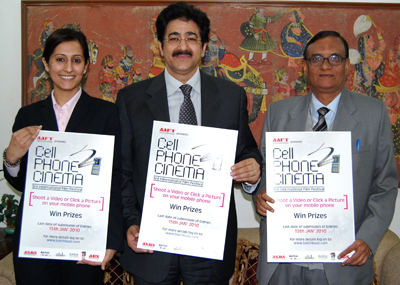 The popularity of Cell Phone Cinema festival is increasing day by day. “We are excited that the third festival of Cell Phone Cinema is fixed for the 3rd week of January and many renowned film makers have agreed to be there with us in Noida Film City” said Sandeep Marwah president of Marwah Studios while releasing the first poster of the festival.

The young crowd of film makers lined up to collect the entry forms from the festival office. “The concept is so different that it has to attract the upcoming film makers of the world” said Prof Karl Bardosh of New York University. The last date to receive entries is 15th January and films which are to be received in any three categories can be uploaded at www.batchbuzz.com. The categories are Fiction/Music Video, News Gathering and a Still Photo.
One Take Media, Rajshri.com, Radio Noida 107.4FM, Shivkala Motion Pictures, Greycell communication, Media Mughals,BatchBuzz.com, Dragon.com, Film Producers Guild of India , Marwell Tours and Travel, Cable Quest, AAFT and MEC Art Gallery have joined hands together to be the partners in progress. 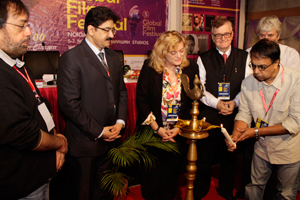 Asian School Of Graphics And Animation, one of the biggest setup in education and training in Multi Media, prepared to exhibit its works at 5th Global Film Festival Noida 2012 at Marwah Studios Film City Noida from 5th to 7th November.
“Like Last time this year also Asian School of Graphics and Animation will participate in the biggest media fair here in Noida” informed Sandeep Marwah President of 5th GFFN.”
“Global Film Festival has created its brand by continuously conducting its activities now for six years. Film makers and TV professionals from all over the country and the World have started attending this three days event” Marwah added.
Animation has a special place in the festival and extraordinary facilities will be announced for the animators during this three days affair.