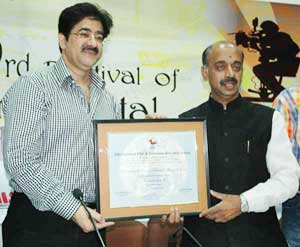 Mr. Sandeep Marwah & Mr. Vijay Goel
“It’s a great pleasure to see the creative product of young film makers .The film schools are nursery for film technicians”, said Vijay Goel, Chief Guest and former Union Minister, Government Of India while inaugurating the 63rd Festival of Short digital Films at Asian Academy Of Film And Television, Marwah Studios, Film City Noida. The festival is organized by International Film And Television Club[IFTC] and has 15 best films made by the students in the last batch of AAFT produced by Marwah Films And Video Production, a production house under the leadership of Sandeep Marwah.
“I had the opportunity to be in different countries of the World, but the kind of Film and TV education AAFT is providing in India, it is commendable.” Said Krishna v. Rajan, an IFS and former Ambassador to Nepal ect. and Chairman of Universal Peace Federation[India Chapter].
“I am proud that I could create an International Record with the students of AAFT, and could produce 1500 short films with the young film makers of 70 countries of the World.” informed Sandeep Marwah, President of Marwah Studios.
The other speakers who spoke on the occasion were Vinod Zusti, a TV producer Director,
Arun Kumar of International Sports Entertainment Ltd, Anoop Bhandari Editor Models and Trend, Dean AAFT.Later Sandeep Marwah presented Academy Award to Rajesh Bajaj an alumnae of AAFT from 7th Batch for his sincere contribution to Film and TV Industry. Rajesh Bajaj has been the director of more than 150 advertisement films, writer director of known film ‘Hari Puttar’,and now working in Hollywood with some big names like Halley Berry as writer/Director. 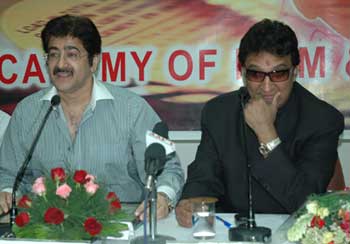 Mr. Sandeep Marwah & Sameer Sen Music Director
Asian Academy Of Film And Television along with the social organization Brotherhood organized “Look Back We Care Film Festival” an event of films on Disability at Marwah Studios, Film City, Noida. The collection of films on different issues of disabilities were projected to the large crowd, film and television students of AAFT,ASMS and ABS with an idea to evoke emotions towards people who are sometimes ignored by the community and society for no rhyme or reasons.

“We have joined hands with Brotherhood only to promote the idea of creating awareness towards disability” said Sandeep Marwah, President Marwah Studios. “We at brotherhood have pledged to promote our disable brothers and sisters to come forward in life and become independent” said Satish Kapoor, the Director of the Festival .The festival is supported by the information Centre of United Nation, National Trust, Shivkala Motion Pictures and International Film And Television Club.

“We have to look back into Hindi feature films like Black, Dosti, Tare Zameen pain, Koshish where a huge information is highlighted on disability” said Sameer Sen Chief Guest of the day and renowned music director who has given music to 150 feature films like Jalwa ,Arjun Pandit, Anari No 1, Achanak, Salakhen, Kartavaya etc.

B.B.Choudhary IPS, Sanjeev Sachdeva, Rajeev Chandran of United Nation Information Centre, R.K.Singh former Engineer in Chief, Doordarshan, Raghaveddhiraa of Mangolore Port Trust ,Sharad Dutt of Channel P7 were the other speakers of the day. The pogramme was followed by screening of 15 selected short films on Disability.Later Marwah honored the guests with membership of IFTC. 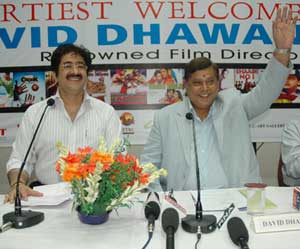 Mr. Sandeep Marwah & Mr. David Dhawan Film Director
“In this tense system of our daily routine, we all need entertainment and there is no other source better than watching feature films, which is easily available and is economical” said David Dhawan the renowned film Director of popular films like Biwi Number One, Partner, Mujhse Shadi Karogi, Ankhe, Raja Babu, Coolie Number One and many more while talking to the students of Asian School Of Media Studies, Asian Academy Of Film And TV and Asian Business School in the Master Class at Marwah Studios, Film City Noida.

Davin Dhawan was greeted by the president of Marwah Studios Sandeep Marwah who introduced him to the excited, charged and large gathering of students, Media Persons and film makers present to listen to David’s experience of Indian Film Industry. ”Who can tell us better than David about Film Industry who has dealt with every actor, producer, music director, artist and technicians in his 42 feature films” said Sandeep Marwah.

His classmate, Film Director and Dean Cinema, Asian School Of Media Studies Ashok Tyagi, recollected their days of struggle in Mumbai when they were looking for their first major projects. “This is one industry where first you have to deserve than you have to desire.” said Ashok Tyagi. “Film Business requires deep interest, sincere efforts and continuous persuasion to get success, and David is the real example of the same.” added Ashok Tyagi.

The HOD Cinema ASMS Rahul Sehgal could not resist mentioning that “,David Dhawan has today created a separate School Of Thought in Indian Film Industry. He has promoted Comedy Genre which is most difficult to present.” Other noted personalities who spoke on the occasion were Suman Bajaj Kalra Dean Of Studies ASMS, Dean AAFT,

Later Sandeep Marwah the founder of Asian Education Society honored David Dhawan with ACADEMY AWARD and presented him with the life membership of International Film And Television Research Centre. The event was followed by the question answer session by the students of Cinema. 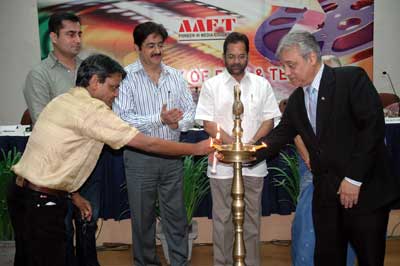 Suresh Sharma ,Ranjan Arneja, Mr. Sandeep Marwah, Mukhtar Abbas Naqvi, Bejon Mishra
Narrating the consequences where by erasing one word from the speech or an interview, the whole meaning of the paragraph can be changed, Mukhtar Abbas Naqvi the former State Minister of Information and Broadcasting, Government Of India and now the Vice President of Bhartiya Janata Party expressed that, “media persons have to be more responsible in this age of growing media activities”. He emphasized the need of proper training for younger generation while inaugurating the 64th batch of Asian Academy of Film and Television (AAFT) at Marwah Studios, Film City, Noida.
“The women of this nation has to come out openly and have to fight for her rights, media, film and television is the correct place for them,” said Mrs Suman Krishan Kant a renowned social worker of the country and wife of late Vice President Of India Shri Krishan Kant.
“Consumer is the most powerful part of all the businesses”, said Bejon Mishra who is the president of Federation of Consumer Societies in India called “VOICE.” He cautioned all the young film, TV and Media Students to get into the business keeping in mind the ultimate satisfaction of the consumer should be the targets of their all programs.
“We emphasized and amalgamate the Indian traditions and Culture into our syllabus as we believe that our culture has a very strong footings and can produce not only a better media person but a good human being from Asian Academy Of Film And Television (AAFT).” Said Sandeep Marwah the President of Marwah Studios and founder of Noida film City.
The other speakers who spoke on the occasion were Jiten Hazarika renowned painter and cousin of Bhupen Hazarika the recipient of Dada Sahib Phalke Award.Suresh Sharma the veteran Journalist and editor of Sandya Times of Times Of India Group. Later Chief Guest Mukhtar Abbas Naqvi presented “Academy Award” to Ranjan Arneja of 31st batch of Acting who has recently completed 900 episodes of ACP ARJUN on India TV and gained publicity through many other radio and TV programs .Marwah presented membership of International Film And Television Research Centre to the Guests. 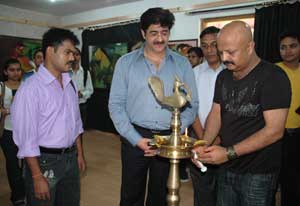 “The making of sketches and right combination of colors is the beginning and development of all arts in the person”, said D.J.Narain, the Director of Song and Drama Division, Ministry of Information and Broadcasting, Government Of India while inaugurating and appreciating the exhibition of paintings by Paresh Mridha at Marwah Studios, FilmCity, Noida.

“A large set of colorful paintings are displayed as it is the part of the syllabus of the students of Asian Academy Of Film And Television” said Sandeep Marwah, President of Marwah Studios who believes that studying paintings is the development of aesthetic sense in the young aspirants trying to be in the film and television trade.

“I am lucky to be associated today with film business and media students of AAFT , it has given me a new energy and lots of ideas to bring in new style in my working” said Paresh Mridha, the senior artist whose works have already been appreciated in number of shows in India and abroad. It was the first day of the students of 64th batch of AAFT. 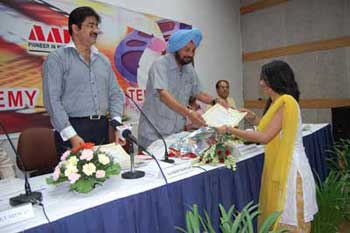 Former Director CBI Mr. Joginder Singh & Mr. Sandeep Marwah President Of AAFT
“To be the most successful person in life what you need is the discipline and media is no where away from it”, said Joginder. Singh, Former Director CBI and IPS officer while presenting the diploma certificates to the pass outs of 63rd batch of students of Asian Academy Of Film And Television in a glittering function at Marwah Studios. “I believe every one can be successful in life subject to what are your input to your success,” added Singh. The students of Asian Academy Of Film and Television were impressed by the motivational address by the chief guest.
The young aspirants of film and electronic media were also appreciated by the commissioner V.K.Singh from the ministry of revenue, Government of India for giving economical and meaningful films to the nation. “I am proud to be associated with the institute and its ideology,” said V.K.Singh .
The Assistant General Manager of the second biggest bank of the country Punjab National Bank Ashok Gupta assured the bank support not only to the institute but to the students too. “I am happy to note that AAFT has churned out 7000 media professionals hailing from 28 states of India and 70 countries of the World.” Ashok Gupta was the guest of honor.
Later Pradeep Pallavi, the special guest at the Convocation who has been the Comedy king Of TV for a very long time created laughter while addressing the audience. The President of AAFT Sandeep Marwah presented life membership of International Film and Television Club to the guests and informed students about the forth coming activities of the school. “Believe in oneself and trust in the education will always take you miles ahead. Sky is the limit for a man who knows how to work hard,” added Marwah. 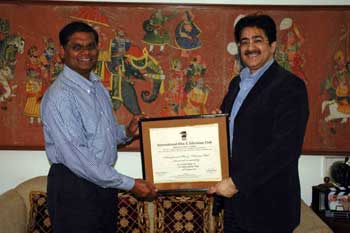 Dr.A.K. Pillai & Mr. Sandeep Marwah President Of AAFT
The Indian Films are always been a source of inspiration and attraction for people who are emotional enough to protect their views on family issues and family unity. One such Doctor by profession from NewYork and Indian at heart Dr.A.K. Pillai visited Noida Film City recently to fulfill his desire to be the part of Indian Film Industry. The fact is that he was too lucky to be in films in his first visit when managing director of Marwah Studios offered him a role in his forthcoming short film. “It is too early to digest the offer to be in films, I have been thinking to be part of this Industry from 30 years, I need at least three months to come back and act in films” said Doctor Pillai who was there at AAFT with his wife and son to visit Sandeep Marwah. “We deal with soul of the artist, I always have provision to entertain people like Dr. Pillai who always encourage people around to promote Indian Film Industry.” Said Sandeep Marwah explaining him the complete education system of AAFT, ASMS,ABS and AAFT School Of Graphics and Animation. Dr. Pillai extended his gesture by issuing a scholarship in the Academy. Later Sandeep Marwah offered him with the membership of International Film and Television Club.