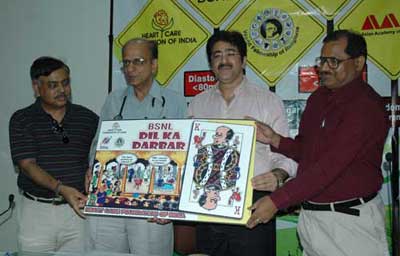 Mr. Sandeep Marwah & Dr.K.K. Agarwal
The Heart Care Foundation Of India, a social organization has joined hands with Asian Academy Of Film And Television, the premier film, TV and media school of India to create awareness on the subject of GOOD HEALTH.
The President of the organization Dr.K.K. Agarwal who is the leading Cardiologist of the country conducted his press conference at Marwah Studios and expressed this wonderful association with International repute film school. “First it was MTNL, then BSNL and now AAFT with family of 8000 media professionals we will be able to grow faster with the slogan of GOOD HEALTH” said Dr.Agarwal.
“We will leave no stone unturned to make the coming Health Mela and Dil Ka Darbar to be the most successful venture of HCFI” said Sandeep Marwah, President of AAFT and Marwah Studios.” Health is Wealth and most of the media persons do neglect their health while achieving their huge targets, we need to remind them the importance of good health and these kind of Events are the best way.” added Marwah.
The 16th MTNL Perfect Health Mela will be from 3rd to 12th oct,09 and BSNL Dil Ka Darbar health checkup on 6th sept,09 at MAMC auditorium in Delhi. 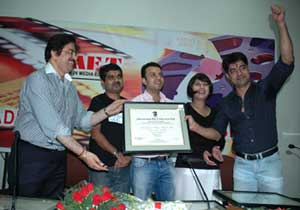 Sandeep Marwah ,Mazhar Kamran, Nakul Vaid, Sharbani Mukherjee & Sushant Singh
After being part of the creative team in superhit films like Satya, Jhankar Beats and Masti, cinematographer Mazhar Kamran is now ready to release his directorial debut titled’ Mohan Das’ informed Sandeep Marwah, President of Marwah Studios while welcoming the team of feature film Mohandas at AAFT and ASMS at Noida Film City.
Talking to the students of Asian Academy Of Film And Television and Asian School Of Media Studies the Director of the film Mazhar Kamran declared that “unlike its resemblance to the name Mohan Das Karam Chand Gandhi, the film is a black comedy and derives zero similarity from the patriot.
The film is made on a small scale with talented actors like Sonali Kulkarni, Nakul Vaid, Sushant Singh, Sharbani Mukherjee, Sameer Dharmadhikari, Uttam Haldar, Aditya Shrivastav, Akhilendra Mishra and Govind Namdeo who all were present there to interact with the media students.
Sandeep Marwah also informed that the film is made under the banner of Vertika Films Pvt Ltd. and is produced by Abha Sonakia.

Sonali Kulkarni disclosed and said “The plot of Mohan Das revolves around a man who is lost in his own country” Sharbani Mukerjee added,”. The problems faced by a common man are dealt with open satire in the film.” Replying to the questions of students of Asian Business School the Director informed that the Screenplay of the film is by Uday Prakash, Music is by Vivek
Priyadarshan and Lyrics by VK Sonakia and Yash Malviya, Cinematography is by Mazhar Kamran
himself, Editor is Suresh Pai and Art Director is Jayant Deshmukh.
Later Sandeep Marwah honoured the stars with the membership of International Film And Television Club of AAFT.The dignities who all attended the function were Rahul Mittra of Brandsmith, Latika Sahani,Satish Anand,Kanan. 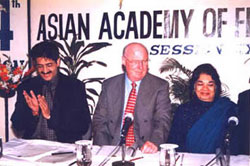 The ambassador of Norway in India Mr. Truls Hanevold revealed that is was at the insistence of the Prime Minister of Norway that feature films made in his country were sent to India for the first time last year. His Excellency Mr. Truls Hanevold was formally inagurating the ’ Festival of Norwegian Films’ at Asian Academy of Film & Television. The audience applauded when the distinguished guest mentioned that he watch the feature film ’ Monsoon Wedding’ at the threatre in Oslo.

Earlier Welcoming the distinguished guests, Prof. Sandeep Marwah affirmed the importance of studying well made films in the training of film and television professionals. He also thankfully acknowledged the support of International Film & Television club to the students of Asian Academy of Film & Television. The three films screened after the inauguration of the festival were ’ Junk Mail ’ a comedy directed by pal Sietaune , ’ The other side of sunday ’ a film full of humour and warmth about a Vicar’ s daughter and ’ Frida – Straight from The Heart ’ narrating the attitude of a thirteen year old girl towards the affairs and relationships of her family and friends and her own conduct – both directed by Berit Nesheim. ’ The Prompter’ directed by Hilde Heier , ’ The other side of sunday’ directed by Beritt Otto Neishem ’ Zero Kelvin’ directed by Hans Petter Moland and ’ Insomnia – No Peace For The Wicked’ directed by Eric Skjoldbaerg are among the other feature films included in this event.Norwegian filmmakers have indeed produced outstanding feature films on subjects ranging from social realism, romance, detection, art and literature as well as documentaries since the very beginning of the emergence of this art from in Europe. Norwegian films have won numberous awards in international film festivals. Speaking on this occasion the well know film critic and editor of Cinemaya Aruna Vasudev said films enable the creative people to deal with normal life issues such as characters, relationship and emotions. She said that film festivals indeed provide an opportunity to the film lovers to watch movies other than those from the Hollywood. Dr. U. Radhakrishnan, Vice President, Federation of Films Societies of India, Mr. S.C. Srivastava, AAFT’ s Resident Representative in Canada, UK also addressed the gathering. 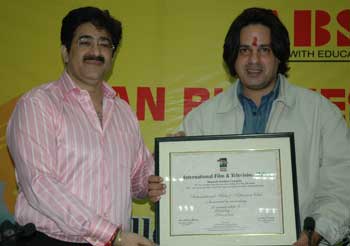 Sandeep Marwah & Actor Rahul Roy
“Film Making is the most expensive expression, an actors has to be fully trained for their job and film Schools can groom them to the best” said Rahul Roy the leading actor of 32 films including Aashiqui, Junoon, Gumrah, Pehla Nasha, Naseeb, Achanak and many more from the platform of Marwah Studios to the young and new aspirants of Film and Television trade.” India is the largest film producing country in the World, you are bound to get work in the industry” Rahul motivated the students of AAFT, ASMS and Asian Business School.

“We sell three billion tickets of Cinema Halls in one year, which is largest in the World even more than Hollywood, USA” added Sandeep Marwah introducing the Media Education System of Marwah Studios.” Our teaching, training and education system is no less than IITs and IIMs of India”explained Marwah. 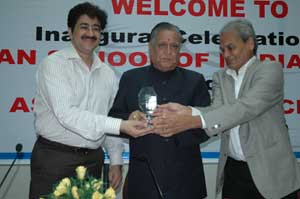 Sandeep Marwah , K. M. Seth & Vinod Pande
The producer and Director of feature films like Ek Bar Phir, Yeh Nazdeekiyan, Ek Naya Rishta, Repoter, Sins, Red Swastik Vinod Pande appreciated the way of conducting film and television courses in Asian School Of Media Studies while inaugurating the 2009 batch of the institute at Noida Film City.” I am happy to note that ASMS is the first film College of the country and providing twin certification, a degree and a diploma” said Vinod Pande.”I cannot forget the efforts of Sandeep Marwah who alone took the responsibity of building Noida Film City when no one was ready to be part of it. Students must learn the level of commitment they need to be successful in Media”

“The institute is just like an University, the association with foreign universities has brought colours to the film courses” said Lt. Gen. K. M. Seth former Governor of Chattissgarh at the time of opening new batch of Asian Business School. Now I am part of this International education Centre and would remain so that I can contribute my experience. ”he added.

Sandeep Marwah the president of Marwah Studios expressed his gratitude to all the members of the group for bringing this centre to World fame. ”I am also thankful to Indian Film Industry for supporting this Institute to its best, ”said Marwah.

Later Vinod Pande the President of Indian Film and Television Directors Association presented Academy Award to the alumni Lovleen Thadani the student of 9th Batch who is running her own production house, has directed more than 100 documentaries and won many laurels.”I owe my success to this institution which has given everything what I looked for.I have yet to find a better motivator than Sandeep Marwah” said Lovleen to the large students in the auditorium. 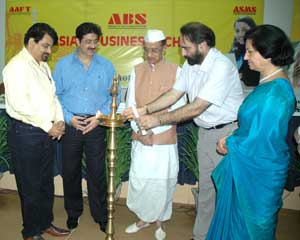 Satosh Bharti , Sandeep Marwah, Dr Bhisham Narayan Singh & Gurbir Singh Gerewal & Suman Bajaj Kalra
A full day workshop on the ethics of journalism and how to be a good journalist took place at Marwah Studios organized by the International Film And Television Research Centre in association with Asian School Of Media Studies and Asian Academy Of Film And TV for the working journalist of different News papers and TV channels.

“Be honest to your profession, journalism needs lots of passion, running a news paper is like a prayer” said Dr Bhisham Narayan Singh, former Union Minister, Government Of India and Former Governer of 7 states of India while inaugurating National Workshop on Journalism. “Honesty pay in life, it is always tough way to success” he added.

“It is important to pursue with the stories till it reaches to its end” said veteran journalist Santosh Bhartiya who has made his position from a reporter to member of Rajya Sabha. “Never afraid from the strong influences, believe in investigation,” Santosh added.

“Education and training is must for every profession including journalism” said Sandeep Marwah President Marwah Studios. Command on language, research on the subject, preparation and home work about the person are some of the tips given by Marwah with some interesting examples.

The known film director Gurbir S Garewal spoke about film Journalism and the slip outs in film journalism. Other speakers who spoke on TV Journalism were Dean ASMS prof. Suman Bajaj Kalra and Dean AAFT Prof. The workshop became more interesting with the large set of question answers at the end of the session. 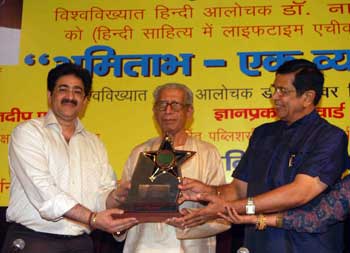 Mr. Sandeep Marwah ,Dr Namwar Singh & Oscar Fernandez
“I cannot forget my association with Marwah Studios where I must have been visited 100 times out of 700 episodes of Subah Savare which had taken place there. I have noticed the quality education at AAFT remarked Dr Namwar Singh the recipient of Gian Shree Award at Sri fort Auditorium from Oscar Fernandez former Union Minister and General Secretary, All India Congress Committee.

A function organized by the Savitri Vikas Samiti , an NGO to honor four distinguished personalities of India. The awards were for Best Writer, Best Education Centre, Best Publisher and Best Printer of the Year.

“All education must lead to personality development, knowledge upliftment and to maintain the culture heritage in India, I am proud that AAFT is doing the same and has become the Ambassador of Indian Culture in 70 countries of the World” .said Oscar Fernandez, while handing over the Gian Deep Award to Sandeep Marwah, Director of AAFT Asian Academy Of Film And Television in front of Media, Film and Television persons, Poets and writers,

“I am indebted to the hard working, honest and dedicated team of Asian Academy Of Film And TV who all with their sincere efforts have brought this school to the World fame.” Expressed Marwah who was emotionally charged while accepting the award.