“We are keen in developing and promoting cultures of India and Egypt where country men of both the countries can relate to each other comfortably” said H.E. Dr. Mohamed Higazy. “We want to open the doors of our country for Indian Art and Culture too.” He added.

“Films are the best Ambassador of culture of the country” said Sandeep Marwah the founder of film city and Director of AAFT. “Exchange of films, film festivals, and film personalities can bring in ample change in thinking and relation between two countries” added Marwah.

“I would love to be there at Egypt to represent my country India, and can do anything to built the relations between these two countries” said Anil Kapoor, who has become well known star internationally after the release of feature film Slum dog Millionaire which has bagged many awards including Oscars.

Sam Salem, the minister Counselor and Ms Dina el Sehy the counselor of Egyptian Embassy were also present there in the meeting. 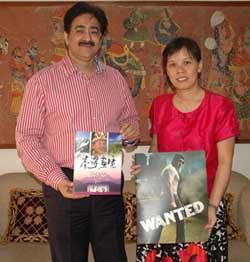 “We are ready with the cinema from Taiwan and also planning to have art exhibition at AAFT campus and a cultural show in this November” said Joy yen, the Director of Information Division , Taipei Economic & Cultural Center In New Delhi.

“In contrast to the melodrama or kung-fu action films of the earlier decades, New Wave Taiwan films are known for their realistic, down-to-earth, and sympathetic portrayals of Taiwanese life. These films sought to portray genuine stories of people living either in urban or rural Taiwan, and are often compared stylistically to the films of the Italian neorealism movement.” Said Sandeep Marwah, president of Marwah Studios.. The Screening of the films will indeed to be a great learning experience for the students of cinema in our country” he added. 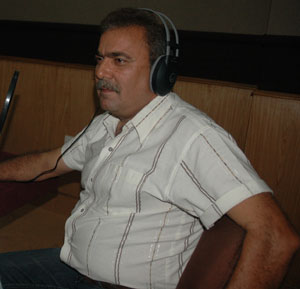 The renowned Cinematographer of well known films like Aawargi, Jurm, Gunah, Kasam Vardi Ki, Ek Bar Phir, Disco Dancer etc and Director of feature film Trichi Topi Wale Nadeem Khan who has been in Indian Film Industry for more than 30 years is here with the film students of Asian School Of Media Studies [Department Of Cinema] on the invitation of Sandeep Marwah President of Marwah Studios, Noida Film City.

“Sharing experience with students of Cinema is like spiritual activity for me” said Nadeem Khan while conducting five full day workshop at ASMS and AAFT.” I feel dividing your knowledge with young generation makes you feel more responsible towards the industry” added Nadeem. .Ashok Tyagi Dean [Cinema] has designed the workshop on Camera and lighting techniques for Cinema students and where H.O.D. Rahul Sehgal is coordinating the same.

“I am glad Nadeem Khan has upgraded the course with his presence, students have been benefited to a great extent” said Sandeep Marwah. “We are happy that Nadeem has agreed to be on the council of Cinema studies” added Marwah. Nadeem Khan also expressed his views on films and talked about his father Dr. Rahi Masoon Raza on Radio Noida 107.4FM. 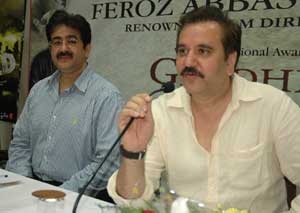 Feroz Abbas Khan was talking to the students of 64th batch at Noida Film City, he referred the name of many students specially Gurmeet Singh who has been with him as First AD, Ridhima Pandey as Costume in charge and Pratikh Sapra as AD in feature film Gandhi My Father. “ I am impressed by the quality of education, the institute is imparting at AAFT as I need no more proof than the honest, hardworking and intelligent students who have worked with me.” added Feroz.

“I am so thankful to Anil Kapoor the producer of the film Ganhi My Father and the Director Feroz Abbas Khan for showing so much of confidence in the institution and I assure that this confidence will remain the same for ever ”said Sandeep Marwah, the president of AAFT .Later Marwah presented life membership of International Film and Television Club to Feroz Abbas Khan. Others who spoke on the occasion were Vice President AAFT prof Harshvardhan, Brandsmith CEO Rahul Mittra, and Dean Asian Business School Latika Sahani . 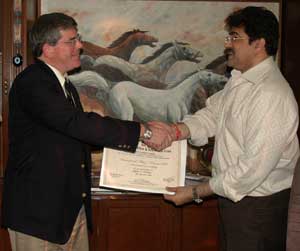 Andreas Udbye & Sandeep Marwah
Indo American Chamber Of Commerce joined hands with the American delegation to India consisting of 17 members under the leadership of Secretary of the state Sam Reed 14th Secretary of State of Washington and the mission manager Andreas Udbye. The members of the delegation were here in India to participate in conference and to develop business relationship with Indian parties under trade and cultural mission to India.
“We are very keen in developing relations with American Business People, as I feel we can still learn more when it comes to Films and Marketing the products” said Sandeep Marwah president of Marwah Studios and Director of Asian Business School, Noida.
Atul Vyas the secretary General of IACC recommended Alferd G Schweppe, an attorney at law from Washington who represented the delegation at Noida. “I am very keen in Indian Film and TV industry and would love to represent Marwah Studios, a creative Enterprises in USA for any kind of job which I can handle” said Alferd.
Later Sandeep Marwah presented life membership of International Film and Television Club to Alferd G Schweppe. It was good time for Radio Noida 107.4FM to interview Alferd for his needs from India.
The other members of the delegation were Margie Reed, Stephanie Horn, David Ammons, fred Finn, Bonnie Finn, Bradley Gearhart, Glen Hudson, Kathy Kimbel, Amit Mathur, Mohit Mathur, Ali Raad, Sandra Raad, Al Schweppe, Rebecca Sherrell, and Jasmel Sangha. 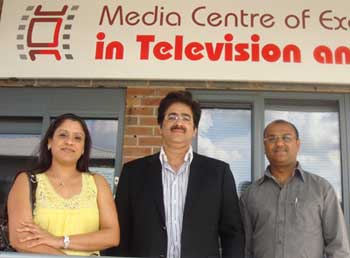 Neeta Rajput, Sandeep Marwah & Satish Visavadia
UK based Ice Media Academy with its directors Neeta Rajput and Satish Visavadia honored Sandeep Marwah, the president of Marwah Studios Creative Enterprises with memento on his visit to Leicesster, UK for his untiring efforts to promote Media business internationally. ”Sandeep Marwah not only founded, promoted Noida Film City but has trained 7000 media professionals under his Media School AAFT and ASMS from 70 countries of the World” said Neeta to the large gathering at IMA, Leicester, UK.

Answering to the questions from students of IMA, Sandeep Marwah confirmed and added that they are very keen in joint ventures not only in Education but also in making films and are open for proposals from UK.
.“My visit to IMA has induced me to share my experience not only to the British students but also to the trainers and I am honored to be the advisor of the IMA” said Sandeep Marwah during his trip to Leicesster. “We have already entertained and trained one group of 25 British students from this Academy who were in India at AAFT to understand the Indian Cinema.” added Marwah.

Satish Visavadia promised to be there at Marwah Studios to share his part of Media education to the Indian Media Students in short period of time. 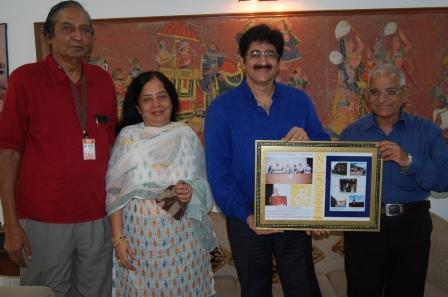 Sandeep Marwah
A visit to Stratford – upon Avon in the United Kingdom – the birthplace of the greatest English dramatist and poet of all times William Shakespeare – in August 2009 was indeed a pilgrimage for the stage artiste Sandeep Marwah. After paying his homage at the Shakespeare memorial and meeting with the members of the local Shakespeare Society, Sandeep Marwah has decided to include the works of this creative genius in the curriculum of the acting courses of Asian Academy of Film & Television and Asian School of Media Studies. A section in the Books Library of the media school would be dedicated to the text Shakespearean plays. Filmed and video recordings version of Shakespearean plays would also be prepared course of time by the faculty and students of AAFT.

Urvashi Sharma ,Sandeep Marwah, Om Puri, Ashu Tarikh & Sushant Singh
“It is my pleasure to look after the prominent people of the industry when they are at my Film City at Noida and also help them in promoting their film through our family of 8000 media professionals scattered all over India and 70 countries of the World.” said Sandeep Marwah president of Marwah Studios and founder of Film City while introducing the team of feature film BAABARR to the National Press.

“Baabarr is a very different story of a child who commits crime, we have shot at the actual locations and I am more than satisfied by the performance of my team wheather acting or the technical side’ said Ashu Trikha the Director of the film who has already given films like Alag, Sheesha and Deewanapan

“I am sure you will fall in love with my character, I am performing as police in this film, I am so thankful to the cinema audience who all have accepted me in different roles and Characters, this is what I have always thought of.” said Om Puri the veteran Actor of Indian Film Industry who has worked in more than 200 films. “ Training for the medium is must, it helps you in under standing yourself, the technical part of Cinema” added Om Puri while answering the questions from the press.

The leading lady who entered into the hall bit late became the centre of attraction all of a sudden. The gorgeous, good looking and talented Urvashi Sharma attracted one and all with her charms. The over loaded auditorium gave her a very warm welcome.

Sushant Singh was quite humorous and brought laughter many times answering to the questions.” I may be talking too much, replying too much, promoting the film too much but I have a small role in the film” 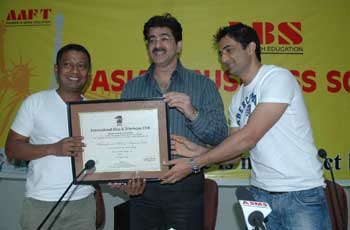 Onir, Sandeep Marwah & Sanjay Suri
The popular and the talented actor of feature films Sorry Bhai, My Brother Nikhil, Filhal, Dhoop, Bas Ek Pal, Sanjay Suri expressed the importance of emotions in Cinema in the Master class of Marwah Studios where the large gathering of Film, TV and Media Management students of Asian Academy Of film And Television, Asian School Of Media Studies and Asian Business School were engrossed in listing to his statements.” Emotion is the language of Cinema” said Sanjay.” Education and training do help an actor to get familiar with the techniques of Acting” he added.

“Films need lots of passion, and hard work. This is one business where you cannot take things for granted.” said Onir the renowned Writer, Editor and Director of feature films Bas Ek Pal, Sorry Bhai and My Brother Nikhil who offered the students to be the producer of his next film by buying the shares of the project.

“We at Marwah Studios feel that interaction with the industry is not only necessary but essential” said Sandeep Marwah President of Marwah Studios while introducing the guest from Munbai. “We are happy that two talented and experts from the industry are going to be the members of our family”

Later Marwah presented them the membership of International Film And Television Club. Others who spoke at the event were Suman Bajaj Kalra Dean ASMS, Latika Sawhney Dean ABS and president of All India Cable Association Roop Sharma.