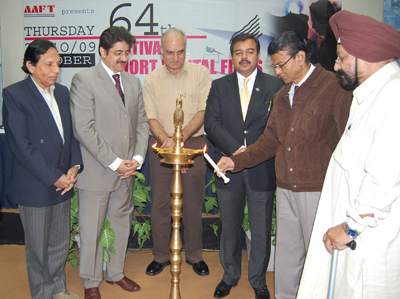 L To R : Adeep Tondon , Sandeep Marwah, Kamal Chopra, Asin Mittal,Esmayeel Shroff & A.S. Bedi
The renowned film writer and director Esmayeel Shroff said that film festivals do provide an opportunity to learn the practical process of filmmaking. He was formally inaugurating the 64th Festival of short digital films at Asian Academy of Film & Television. This creative genius is credited with launching the career of a number of well known film actors including Govinda, Kareena Kapoor, Tabu, Padmini Kolhapure and Kunal Kapoor. Brifely introducing the festival
Prof. Sandeep Marwah informed that some of the film being screened will be filed as an entry to the student corner of the forthcoming prestigious Cannes Film Festival. The well known cinematographer turned director Adeep Tandon told the audience that creativity indeed lies in the way a story is told with pictures and sound. Addressing the students Asit Mittal of Shivkala Motion Pictures said that every human endeavour including filmmaking demands focussed attention. The veteran television writer and producer A.S. Bedi also shared his views with the audience on this occasion 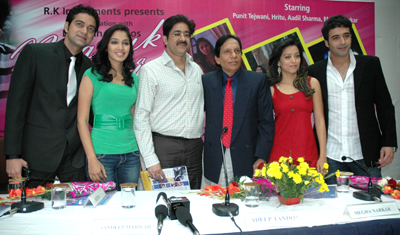 L to R : Aadil Sharma, Hritu, Sandeep marwah,Adeep Tondon,Megha Narkar & Punit Tejwani
A thirty day schedule of Adeep Tandon venture ‘Naazuk Saa Modd’ has begun today at Marwah Studios. A love triangle suspense thriller is to be directed by Addeep Tandon who is a well known cinematographer for number of prestigious projects like Saaransh, Thikana Censor, Grihpravesh etc. The film is being produced by Swapan Dey and Co-produced by Vikas Garg in association with Marwah Studios, Noida. Raghav Marwah is the executive producer of this feature film.

The film is written by Esmayeel Shroff a well known Director who has scripted this film for the first time for an outside director. Some of his well known film are Bulandi, Agar, Thodi Se Bewafai, Tarkieb, Majdhar, God and Gun, Ahista Ahista, Jhutha Such, Dil Akhir Dil Hai and Police Public etc. The film will be shot in Delhi and Noida from start to finish.

“I am going to share my 30 year long experience in the industry with my audience through this film” said Adeep Tandon. “Sandeep Marwah of Marwah Studios is going to lend valuable support to us” he added.

“I have been writing and directing my films, but this is for the first time that I have scripted a feature film for another director” said Esmayeel Shroff. Aadil Sharma, Hritu Dudani, Mega Narkar and Punit Tejwani are in lead roles in the film informed Sandeep Marwah.

“Paintings are like poetry which you have to write with colors and it expresses all your emotions on canvas,” said Jaganath while releasing the brochure. Neema Lal has worked with Artists from Denmark for a period of five years before joining Treveni Kala Sangam. “I extend my heartiest congratulation to Neema for opting Marwah Studios for her solo show within Media students, she is very expressive in her work” said Vikas Garg.

“My journey from cotemporary to abstract helped me to make layers in paintings which help to have perspective effects, but this is not sufficient I would like to increase the number of layers to give more 3D effects.” Said Neema Lal while explaining her paintings to the students of Asian Academy of Film and Television (AAFT) “I want to incorporate in my paintings new trends and recent techniques of other countries along which my own technique to give a much broader and wider look to my creations. The world should know that new chapter has been added in the field of art.” added Neema Lal.

“I am thankful to Neema Lal for accepting my invitation to be part of International Film and Television Club” said Sandeep Marwah while handingover life membership of IFTC to Neema. “We at AAFT want to promote all sort of Arts be it is films, Paintings, Dance, Drama, Writing or any other” added Marwah. 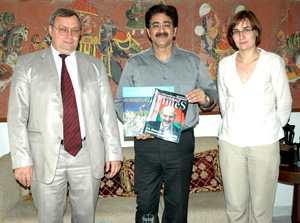 L to R : H.E.Oleg Laptenok, Sandeep Marwah & Maya Rusetskaya
The Ambassador Extraordinary and Plenipotentiary of the Republic of Belarus in India H.E.Oleg Laptenok visited Marwah Studios, a hub centre for Arts and Cultural promotion to discuss in detail the ways and means to promote Belarus films, art and culture in India and vice versa with the renowned International personality Sandeep Marwah, president of Marwah Studios Creative Enterprises.

“We are keen in creating awareness about the culture, art, and cinema of Belarus in India and vice versa’ said H.E.Oleg Laptenok, Ambassador of Belarus in India. “We want people in this country should know the beauty, the locations, the tourism, and the films of our country. ”he added.

“We are ready to get into student exchange, faculty exchange, affiliations and articulations with film and TV schools, would love to hold exhibition of Belarus Arts and paintings, interactive sessions with personalities from Belarus, and festival of students films and Belarus films in India” said Sandeep Marwah.

The cultural policy of the Republic of Belarus is aimed at guaranteeing cultural rights both to the entire society and to every individual, and at political, economic and spiritual renewal of the country. To help achieve these goals there has been worked out the State Programme “Functioning and Development of Culture of the Republic of Belarus up Similar programmes have been adopted in all the administrative regions of the republic and in the city of Minsk. Identified are the priority avenues of the cultural policy, elaborated are the regional programmes informed by Maya Rusetskaya, the first secretary in the Embassy of Belarus in New Delhi. 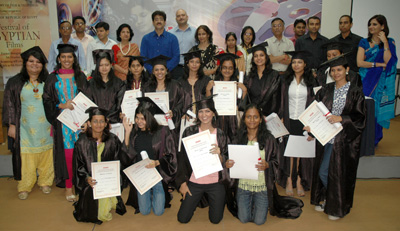 The atmosphere was charged with emotion and excitement as the black caps were flung in the air amongst cheers at the Convocation at Asian School of Media Studies, one of the most prestigious and popular media colleges of the country. The students of Graduate and Masters studies of ASMS had gathered at the convocation to receive their Diplomas in their chosen stream of specialization. The Diplomas were awarded to the students from the Department of Cinema, Electronic Media, Mass Media and Multimedia.

In his Convocation address given in his signatory poetic manner Prof. Sandeep Marwah, Director ASMS, said “No success can be achieved without a spirit of sacrifice. Life teaches you at every step and it is for you to learn from it and boldly face all kinds of circumstances and consequences”. The packed house of students was charged with emotions at these words. There was a sense of loss at leaving the college they had been so proud of.

“We at ASMS give an all-round training and education to our students to secure their future. This includes ethical and professional practices coupled with good conduct befitting good citizens” said Suman Bajaj Kalra, Dean ASMS. In renowned film and TV actress Joyoshree Arora’s words “Students must first be good human beings to be good professionals to reach the top.” Added Dean AAFT, “the seat at the top will always beckon you if you live by this norm”

“You can win the world with emotions and good communication” was the valuable advice given by Latika Sahni, Dean, Asian Business School. Mr. R.K. Singh, former Engineer in Chief of Doordarshan advised “Never forget your alma mater, however big you may grow”

Others who spoke on the occasion were Rahul Sehgal, Sudesh Sharma, Kavita Koli and Om Prakash, the respective Department Heads. The convocation ceremony ended with mirth and joy and a series of photographs capturing the last fleeting moments of this emotional gathering 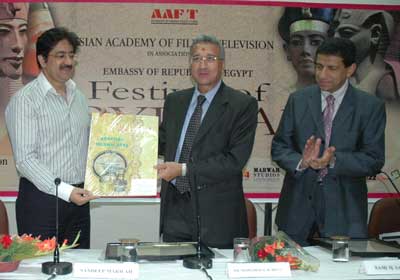 Sandeep Marwah & Dr. Mohamed Higazy and Sami M. Salem
Five days festival of Egyptian Films inaugurated by H.E. Mohamed Higazy, the Ambassador of Arab Republic of Egypt in India at Asian Academy of Film And Television at Noida Film City. Some of the best films including Elmaseer-The Destiny by Youssef Chahine , Malek Wa Ketaba-Heads And Tails Directed by Kamla Abu Zekry,Hassan & Morcos directed by Rami Imran etc are going to be part of the festival.
The excitement in the campus was enormous as it was also the first day of 65th batch of AAFT. The students enrolled from all over India and abroad in this batch were busy reading large banners and posters about Egyptian films, all over campus.
“We are keen in developing very cordial relations with India through films” said HE Mohamed Higazy while inaugurating the festival. “We want the two countries to be like brothers and we are ready for cultural exchange and education exchange programs” he added talking to the media students at Marwah Studios.
“The International Film and Television Club of AAFT has been conducting many festivals in India and now this festival has added another feather in the cap of IFTC” said Sandeep Marwah President of Marwah Studios. “Films are the Ambassadors of culture of any country, today it is the amalgamation of two oldest civilizations of the World through films,” Marwah added.
Others who spoke on the occasion were Sami M. Salem the minister counsellor, Dina El Sehy the Counsellor of the Embassy of Arab Republic of Egypt. Later Sandeep Marwah honoured H.E. Mohamed Higazy with the life membership of International Film and Television Club. 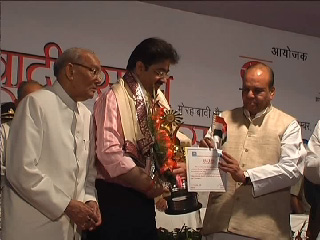 L to R : H.E.Rameshwar Thakur (Governor of Madya Pradesh) , Mr. Sandeep Marwah ( President of AAFT), H.E. K. Sankaranarayana ( Governor of Jharkhand )
Sandeep Marwah, the Director of Asian Academy Of Film And Television, the premier film and TV education Centre in India in private sector has been honored with ‘Sewa Rattan’ by H.E. K. Sankaranarayana the Governor of Jharkhand State at the glittering function at Morhabadi Grounds, Ranchi, .in the presence of H.E.Rameshwar Thakur , the Governor of Madya Pradesh and all the dignities of the state.

Asian Academy of Film and Television (AAFT) has so far trained more than 7000 students hailing from 28states, 5 union territory and 70 countries of the World. “This is the only institution in the World which is giving Film and TV education blended with Indian Culture, Humanity and Gandhi Teachings” said Sandeep Marwah who is also the founder of Noida Film City. “I am thankful to the state Government for honoring me which has not only motivated me to do a better job but also adds on more responsibility on my shoulders to create a better society,” added Sandeep Marwah.

Others who got the Sewa Rattan award were Feroz Abbas Khan, the renowned stage and film personality who has recently been announced National Award for his film ‘Gandhi My Father’ and Nafisa Ali Sodhi the well known actor, social worker and activist running NGO for aids victims.

The event was organized by Jainandu Chairman of State Khadi and Village Industries Board on the occasion of 5th year of its existence to promote Mahatama Gandhi’s vision of Khadi and handicrafts.Rahul Mittra and D.J.Narain were also present there.