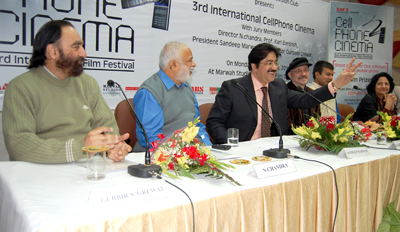 The huge crowd of young film makers from all over India and abroad lined up to enter into the festival theatre at Marwah Studios to look into this third International festival of Mobile Phone Cinema where more than 500 entries have been received from all over the World. “I am excited that the festival has become popular worldwide in just three years, no doubt that our team from AAFT,ASMS,ABS and ASGA has done a great job in making this event so attractive.” said Sandeep Marwah president of Marwah Studios.
The festival organized by International Film and Television Club inaugurated by the renowned writer, producer, editor and director N.Chandra who has given some of the finest films like Ankhush, Tezab, Pratighat, Narasimha, Humlaa, Beqabu, Yeh Mera India etc and presided over by American film director Karl Bardosh.
“I am amazed by the ideas these mobile films have thrown to all of us to elaborate into full length feature films.” said N. Chandra, also the jury member of the festival while addressing the audience, national press and media personalities present there.. “I am associated with the festival from the beginning and happy to see it growing year by year. Mobile Cinema is going to takeover all alternatives of watching films” said Karl Bardosh who is also the prof in Tisch School of Arts, New York University.
The festival was supported by International Film and Television Research Centre, Radio Noida 107.4, International Children’s Film Forum, International Public Broadcasting Forum, Batchbuzz.com, Rajshri.com, Media Mugals, Greycell Communication, Dragons Lab, 1take Media.com, Film and TV Producers Guild of India, Nimbus IT Solutions, NSFI, the Script Hub, MEC Art Gallery and Shivkala Motion Pictures.

The Final result for Non Feature Film Category Awards was handed over to Smt Ambika Soni Minister of Information and Broadcasting , Government of India by the jury in Shastri Bhawan. ” I am aware of the hard efforts of the jury and non stop screening of the films,and the clear and sincere intentions has brought these results to the nation” said Minister in the press conference.
‘AFSPA 1958’ was adjudged the Best Non-Feature Film for the courageous depiction of the non-violent resistance of the people of Manipur. Vinoo Choliparambil would be awarded under the category ‘Best First Non-Feature Film of a Director’s for his film Vitthal. Films Division produced ‘The Assassination of Rajiv Gandhi – A Reconstruction’ has been selected under the category ‘Best Biographical / Historical Reconstruction’ / Compilation film’. Another Films Division work ‘The Land of Rupshupas’ was selected under Best Agriculture Film category. Film & Television Institute of India’s produced ‘Trip’ will be awarded as best scientific film. FTII’s ‘Stations’ was also selected as Best Short Fiction Film. Manoj Kannoth gets the Award for Best Editing for ‘Stations’. Children’s Film Society of India produced Prince and the Crown of Stones was selected as the Best Animation Film. The Best Direction Award goes to Umesh Kulkarni for his work ‘Three of Us’. ‘ Three of Us’ also got the award for Best Cinematography.
Ninety Nine entries for non-feature film section were viewed by jury headed by Ms Arunaraje Patil and Shri Krishnendu Bose, Shri Anirban Dutta, Shri Sandeep Marwah, Shri R.V. Ramani, Shri Sarfaraz Siddiqui and Ms. Neena Mohan as members.

“We have gone through each and every entry throughly,discussed every film, analyised every screening and then come to the decision before declaring the results” said Sandeep Marwah,the jury member. “H E Hon’ble President of India Smt Pratibha Devising Patil shall confer the Awards on the winner in March 2010″ added Marwah.

The renowned film and TV personality President of Marwah Studios Sandeep Marwah has been nominated by the Ministry of Information and Broadcasting, Government of India as member of Jury for National Award Non Feature films Category. This section contains Documentaries, Short fiction and non fiction films and Animation films. Marwah has already created an International record of producing largest number of short films in the World.
“The final screening of around 100 films competing for 22 categories, have been received from all over India.” said S.M Khan Director of Directorate of Film Festivals. “I am proud to be part of National Award Jury, It has given me immense pleasure that Government of India has recognized my efforts in Entertainment Industry” said Sandeep Marwah who is also the Director of Asian Academy of Film and Television in Noida.
The jury is headed by known film maker Aruna Raje Patil from Mumbai. The other members on jury are film makers Reena Mohan and Krishnendu Bose from Delhi, Anirban Dutta from Calcutta, RV.Ramani from Chennai, and film journalist Sarfaraz Saddiqui. 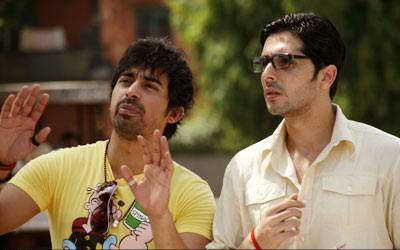 Gurmeet Singh after passing out from AAFT Asian Academy Of Film And Television joined Marwah Films And Video Production under the leadership of Sandeep Marwah and directed few add films, corporate films and a popular and award winning documentary The Mud Palace.

His interest for feature films brought him to tinsel town and joined Feroz Abbas Khan as assistant director and in no time rose to the level of first AD in ‘Gandhi My Father’. He joined later Ashutosh Gowarikar as Chief Assistant in ‘Jodha Akbar’ and no looking back.

Gurmeet now is the Director of Sharafat Gayi Tel Lane, which is now ready for release.. Sandeep Marwah, the Director of AAFT announced a special honour for Gurmeet Singh for bringing laurels to the institution.

The First Pravasi Film Festival came to an end with the presence of Basu Chatterjee, Rahul Rawail, Satish Kaushik, Sandeep Marwah Manoj Bajpai, Meera Nair and many other dignities who all were there to mark there presence to give industry’s recognition to this first Pravasi film festival at Habitat Centre in New Delhi.
LIFE GOES ON by Sangita Dutta won the best feature film, SHOR directed by D.K.Krishna and Raj Nidimoru best short film and FLYING SIKH was declared as best Short Film Fiction .Around 30 films in total were screened in the festival in feature and non feature category. CHEHRE by Rohit Kaushik was the closing film of the ceremony.
“I am ready to support this wonderful venture which has brought many Indians together once again at the Holy Land of India” said chief guest Mrs Preneet Kaur, State Minister of External Affairs, Government of India while addressing the audience. “I invite all NRI’s to Uttra Khand a place full of natural beauty to utilize as natural sets for their next films” said Dr. Ramesh Pokhriyal, the Chief Minister of UttraKhand.
“Marwah Studios would like to offer all its facilities to NRI film makers to come and make films in India and we are also ready for the joint ventures” said Sandeep Marwah the producer of largest number of Short films in the world while thanking Anil Joshi the festival Director for a wonderful initiative. 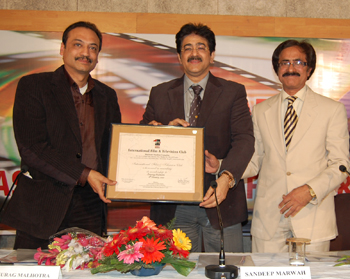 L to R : Anurag Malhotra, Sandeep Marwah & Awais Sheikh
Talking to the students of 66th batch of trainees of Asian Academy of Film and Television, Anurag Malhotra the International head of Zee TV based in Dubai invited media students to the city of Dubai for better exposure and understanding of international affairs in media. Explaining the need of film and TV education for the new aspirant he said “It is not only essential but necessary for every new comer to go through the proper training and education for better future”
“The best way to write the book is to document the events happened with you” said Awais Sheikh the Pakistani writer and promoter of the organization ‘Pak India Peace Initiative’ who has just finished a book called SHAMJHAUTA on the India Pakistan friendship. Awais has been to India many times also invited media Students to come and see for them selves how Pakistan is similar to India in Language, food and Culture. .Answering to the questions Awais appreciated the Indian films and hospitability.
Expressing his enthusiasm on the visit of two international guests Sandeep Marwah accepted the invitation from both the nations on behalf of the students of AAFT and later presented the life membership of International Film and Television Club to both the international guests.