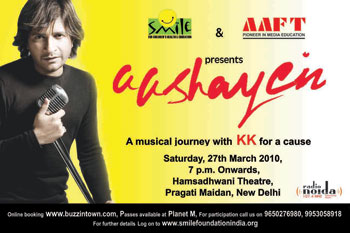 Asian Academy of Film And Television & Radio Noida 107.4 joined hands with Smile Foundation as their Partners in progress for the event- ‘Aashayein’ – KK Live in Concert at Hamsdhwani Theatre, Pragati Maidan, New Delhi. This musical Journey with KK has been an effort of Smile Foundation to facilitate a better tomorrow for underprivileged children. The proceeds generated in the event will be utilized to educate more children under the Mission Education Program.

“Where there is a good motive in organizing an event, we try to be part of that program” said Sandeep Marwah, President Marwah Studios.” Promoting Art and cultural is my Dharma” Marwah added.
KK one of the finest singers in Bollywood, with hits from films like Ajab Prem Ki Ghazab Kahani, All The Best, Tum Mile, Dil Bole Hadippa, Love Aaj Kal, New York, Bachna Ae Haseeno, Race and many more, enthralled the jam packed audience till the end of the show.
Smile Foundation works as a catalyst to change the lives of underprivileged children and youth and give them a better future through more than 100 education, healthcare, livelihood and girl child oriented programmes spread throughout India. 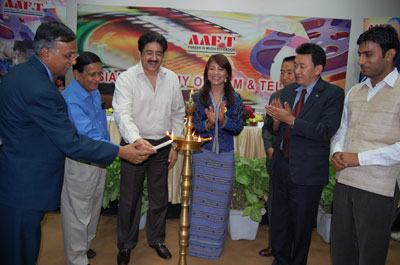 The heartthrob of millions in Bhutan Lakhi Dolma paid rich tribute to the faculty of Asian Academy of Film & TV for its contribution towards sowing the seed of the now flourishing and govt. supported film industry in her tiny kingdom. She was delivering the valedictory to the outgoing students of the 66th session of the world renowned AAFT. Thirteen year ago the top film director of Bhutan Karma Tsehering had received education and training in the art and craft of filmmaking and this was the motive force behind the new dawn in the entertainment industry of Bhutan, she added. The founder and now the President of Asian Academy of Film & TV, Sandeep Marwah said that Karma Tschering has indeed done his alma mater proud and his name would go down in the history of world cinema. In his address to the audience film director Karma Tschering acknowledged that he owe his success to this guru and mentor Sandeep Marwah. He went on to say that work for the welfare of the society is anytime superior to the mere pursuit of wealth. Filmmaking is a human endeavour which leaves a lasting impression on the mind of the viewers and which may lead to building of a healthy, happy and sane society, he added. Social activist and President of Uttariya Nav Nirman Sena Amit Jani exhorted the students on this occasion to try and eliminate through their work the evils which are eating up the very vitals of the Indian society.

International Children’s Film Forum ICFF based in Noida has recently started screening program in Noida villages and slums where some of the good cinema is projected to the children of those villages to promote good habits, education, general health and hygiene.

The coordination of the above program is taken care by a voluntary organization of students of Asian Academy of Film and Television, Asian School of Media Studies, Asian Business School named YES Young Energetic Society.

“I am indebted to each and every member of Asian Academy of Film and Television, Asian School of Media Studies and Asian School of Graphics and Animation for their sincere efforts to bring AAFT to world class media education Centre.” said Sandeep Marwah president of Marwah Studios while accepting the BCS Ratna Award at air force auditorium in New Delhi in a grand function.

Introducing these newly constituted awards to the jam packed hall Dr A.K. Rastogi the Chairman of Avishkar Media Group highlighted the need to upgrade the cable industry with a turnover of 10000 crores approx. “Its a grand felicitation and recognition for the outstanding contribution to the Indian Broadcasting and Cable TV Services during last two decades” said Jawahar Goel of ZEETV Network while unveiling the award in the shape of a Golden Lady.

“It’s a matter of great pride that our alumni Haobam Paban Kumar has won a national Film Award for the best Non Feature film and brought lime light to Asian Academy of Film And Television” said Sandeep Marwah Director of AAFT at Vigyan Bhawan where President of India Smt. Pratibha Patil presented Awards to Indian film Industry for the year 2008 during 56th Ceremony.

The film is a courageous depiction of the non violent resistance of the people of Manipur to protest against a legislation which undermines the values of self respect and the fundamentals of Democracy. The documentation process by various crews and the way it is chronicled offers multiple perspectives.

The President of India Smt. Pratibha Patil said, “cinema needs to be continuously nurtured, as a part of our efforts to not only excel in making films, but also to use it as a medium to tell our stories, as well as give expression to the importance of a humane approach in life”.

“Cinema has an immense influence on thinking and on lifestyles particularly of the young generation. There is much positive energy that can be generated by using films, for conveying the message of good values to society and also eradicating harmful social evils,” she added. 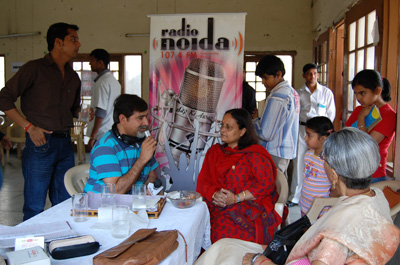 The ICFF promoted by Marwah Studios and supported by education centers like AAFT,ASMS and ABS has joined hands with Lioness Club of Noida—Navsankalp to promote education and awareness for the unprivileged children through films.
Recently two medical camps were organized in Noida at Agahapur sec 41 and Barat Ghar sec 31 where not only people donated their blood, more than 100 patients were treated at no cost basis by the doctors of Kailash Hospital followed by screening of information and educational films by ICFF.
“I am in Lioness Club to help people, to promote all those who cannot afford, and educate people to live happily” said Veena Jaruhar President of Lioness Club. “My association with International Children’s Film Forum is going to enhance our activities” Veena added.
“I have always believed that visual media has the largest impact on the human minds, we want to create huge awareness through Good Cinema” said Sandeep Marwah President of Marwah Studios .The whole event was covered by Radio Noida 107.4FM

“There is no department in education which is not influenced by the information technology and new media” said Sandeep Marwah, President of Marwah Studios while inaugurating two days seminar on role of IT and New Media in Education at India International Centre in New Delhi. “The four other mediums of Media like Print, Radio, Television and Cinema are also now addicted to the fifth brother New Media. These mediums cannot be separated” Marwah added giving case study of his own organizations.

The seminar is organized by World Development Foundation, NGO committed to sustain and enrich the lives of the poor and socially excluded for the development and education of unprivileged under the leadership of Dr.H.O.Srivastava. The other speakers who spoke on the occasion wereYogesh Kochhar Director Microsoft Corp., S.N.Goswami MD ML Asia, Dr Malti Goel advisor to Govt. of India.

The foundation later distributed cash prizes to three poor parents for the education of their children. The inaugural program closed with the handing over the Life Time Achievement award to broadcaster Padamshri H.S. Jolly and Padambhushan Jasdev Singh. 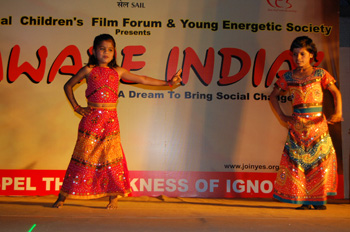 “It is my duty to take care of unprivileged children to best of my capacity as they are my country men. We should not see for what others have done for me rather you should be cautious what you have done for others” said Sandeep Marwah, Chairperson of the forum and President of Marwah Studios while launching AWARE INDIA program to educate and promote citizens of India living in villages and slums through GOOD CINEMA at Marwah Studios with the large gathering of volunteers from different colleges.
The voluntary body of students of Asian School of Media Studies YES, Young Energetic Society which has already become National Body has joined in this aware India program with ICFF .The president Souvik informed all the volunteers to work whole heartily in this venture. “I am not only supporting but would like to be present in every screening at every village and slum to guide my students of ASMS and other colleges” said R.K.Singh Dean of ASMS.
“I want to be the part of this work without second thought” said Ashok Srivastava, known socialist from Noida. “We are ready to add more management to this venture through Asian Business School” said Latika Sahani Dean ABS .International Children’s Film Forum has started showing meaningful films to slums and villages in Noida from the collection of Marwah Films and Video Productions. 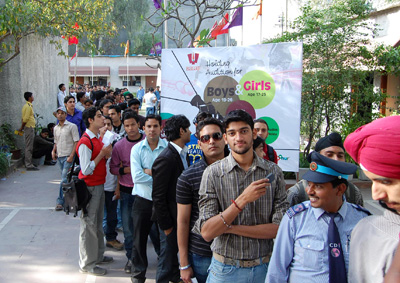 It was a scene to be seen at Film City Noida when hundreds of young good looking trained and untrained actors linedup in front of Marwah Studios to get selected in the newly launched television serials by Balaji Tele Films, Mumbai.

“We are happy to provide our infrastructure and facility to Balaji Telefilms for this huge selection” said Sandeep Marwah, President of Marwah Studios where special arrangements of security were performed to control this large crowd gathered from Delhi, Noida and all neighboring States.

This is a normal practice of Marwah Studios to plan and organize professional campus interviews for the students of all disciplines of Film, TV and Media learning at Asian Academy of Film and Television and Asian School Of Media studies including for the management students of Asian Business School. 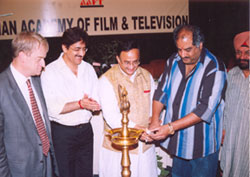 Promising help and support to the budding film and TV professionals, the showman of Indian film industry Boney Kapoor said that they will have to be knowledgeable and skilful in their work. He was addressing the students of Asian Academy of Film & TV. Boney Kapoor advised them to make the best use of the training opportunity provided by this premier film school. The veteran statesman and a state minister of UP Dr. Mairaz Uddin Ahmed said that the founder director of Asian Academy of Film & TV Sandeep Marwah has indeed done the country and his state proud by attracting the nationals of over 50 countries of the world to this institute. Acknowledging the role of Hindi films in unifying the diverse Indian society, the minister stated that satellite TV channels too are playing a significant role in this present era of globalization. The Dean of University of Central Lancashire of the UK – the British partner of the academy John Shaw, the well known film & TV director A S Bedi and the former head of Indian govt’s directorate of film festivals Malti Sahai also shared their thoughts with the students on this occasion.