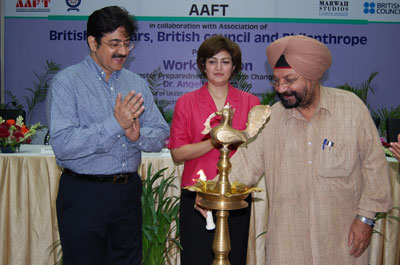 The well known film and television writer – director Wg. Cdr. A.S. Bedi said that Bollywood films have indeed played a commendable role in national integration and promoting communal harmony. He was speaking at a function organized to formally inaugurate the 68th session of Asian Academy of Film & Television. He narrated the challenges faced by him in achieving the goal he had set for himself after leaving the armed forces. With patience everything is possible he added and advised the students to be god fearing and remember that whatever is destined must come to pass. Welcoming the guests director of Asian Academy of Film & Television Prof. Sandeep Marwah mentioned that like in any other human endeavour single minded devotion, hard work and exemplary behaviour are required of media professionals. Chairperson of the NGO Philanthrope Dr. Angeli Qwatra and President Association of British Scholars Mr. Vipin Chopra also shared their views with the students on this occasion. 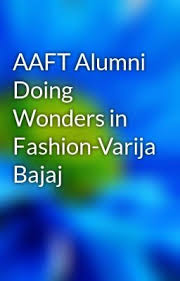 Since the inception of AAFT in 1993, it has been proved that good education supported by value editions like workshops, seminars, symposiums, industry interface, film practical in the respective fields can do great job to the carrier of students.

I believe that when the student grows in the right environment in the college, he marches towards a better goal” said Sandeep Marwah President of Asian Education Group running five setups under the name and banner of brand AAFT- Asian Academy of Film And Television, Asian School Of Media Studies, Asian School of Performing Arts, Asian School of Graphics and Animation and Asian Business School.

“What ever I have achieved I give credit to my Film School AAFT” said Kaushik Ghatak Director of ‘Kaunki Saas Bhi Kabhie Bahu Thi’, ‘Sanjeevni’ and feature film ‘Ek Vivah Aisa Bhi’. “I cannot forget my base AAFT, that was my real beginning in the industry” said Anuj P Joshi, Director of ‘Kausti Zindgi Kay’ and film ‘Garhwali Sholay’. “My respect for my institution will never die, that is my foundation” said Gurmeet Singh chief Assistant in ‘Jhoda Akbar’, ‘Gandhi My Father’ now director of ‘Sharafat Gaye Tel Lene’.

“The education style and pattern of AAFT is no less than IMMs and IITs” said Dr. Bhisham Narayan Singh, the Former Governor of Tamil Nadu who had been the Chancellor of many universities of India. “AAFT is the one of the best managed institutes in our country” said Romesh Bhandari, the former Lt. Governor of Delhi and Governor of Uttar Pradesh. 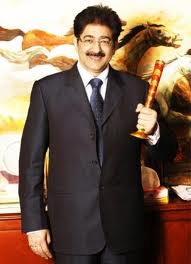 “There is no channel, production house, film company, media house in print, radio, television, cinema or new media where our students are not working” said Sandeep Marwah the president of Marwah Studios and Director of AAFT a media universe in Noida consisting of Asian Academy Of Film And Television, Asian School of Media Studies, Asian Business School, Asian School of Graphics And Animation and Asian School of Performing Arts.

“We have trained 7500 students in media hailing from 73 countries of the World in 40 different courses ranging from 3months to 3years” said Prof. Harshvardhan, Director (Academics) of Asian Education Group. “ and most of the students are working in their chosen field” he added.

It is the policy of Asian Education Group to alter, amend, add, subtract, correct and mould their courses according to the requirement of the industry so that the pass out students should be adjusted into the market in no time.

It is the routine of the administration to organize campus interviews now and then in all the fields of media and some of the most important media house want to depend on the placement service of the institute.

“The special created placement cell is effective enough to handle as many students as enrolled in the batch. This is our 18th year and it speaks for our work” added Marwah. Students are also working within campus for organizations like IFTC, IFTRC, ICFF, IPBF, Radio Noida, ANA etc. 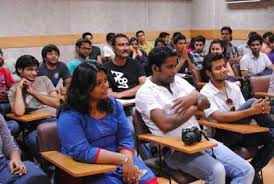 “Yes, they all are the members of International Film And Television Club of Asian Academy Of Film And Television and all of them are guest Faculty of Asian School of Media Studies” said Sandeep Marwah President of Marwah Studios and Director of this Institute while inaugurating new specialized courses in Cinema. 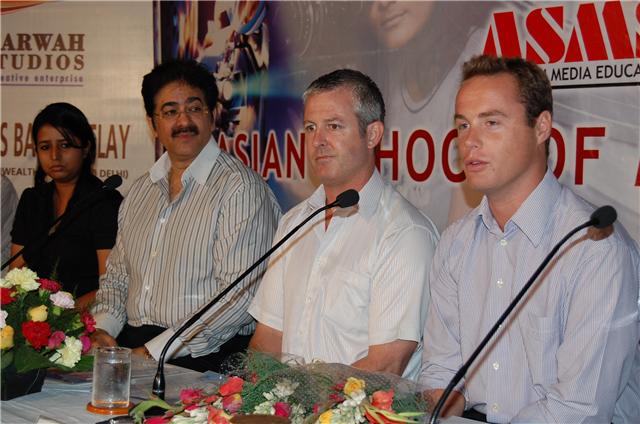 The whole Campus of Asian School of Media Studies was bubbling with high energy when Multi Media Team members of Queen’s Baton Relay entered into the campus. The Students started shouting slogans and Hip! Hip! Hurray! to the former students of ASMS who are representing Marwah Studios, a creative enterprise the only official coverage team of the Relay appointed by the Common Wealth Games 2010.
“Poonam Singh, Neeraj Sauda and Abhinav lal from ASMS are the three media stars who have brought the name of the school to World fame” said Sandeep Marwah, President of Marwah Studios.. “The eight hours film short and edit to small clippings by these film makers is distributed to the whole world media to be seen on different channels everyday’ Marwah added.
“I am thoroughly impressed by the honesty and hard work of these guys” said Adam Best from Australia, consultants from Maxxam Events International, who is the in charge for events of Common Wealth Games Delhi. “Their professionalism shows the level of education at Asian School of Media Studies” said Matt Day the event coordinator of Queen’s Baton Relay.
Others who spoke on the occasion to highlight the works of ASMS students were Surbie, Parul, the coordinator QBR, Prof Harshvardhan the course Director and Prof. R.K.Singh Dean Asian School Of Media Studies who also paid vote of thanks. .Sandeep Marwah presented the life membership of International Film and Television Club to the guests representing Common Wealth Games 2010. The event was supported by Radio Noida and International Public Broadcasting Forum.

Emphasizing on the need of writing for the film, tv, and media students Sandeep Marwah motivated students to come forward and start writing for the wonderful provisions created by Marwah Studios for them including ‘Pranam’ a magazine, ‘Asian News Journal’, ‘AAFT News Letter’, ‘Batch Buzz.com’ a portal and ‘Asian News Agency’. “There is no dearth of exposure if someone loves writing here in the campus” explained Sandeep Marwah while releasing the book on renowned writer Dr. Madhukar Gangadhar written by Sangeeta Raghuvanshi at Asian Academy Of Film And Television, Noida Film City.

“I am associated with this institution for many years and I have taken the liberty to write for this institute many times in my magazine, papers and write ups” said Madhukar Gangadhar present on the occasion as Chief guest who has written more than 36 books himself including novels, plays and poetries. He shared some of the important instances of his life with students.

Others who spoke on the occasion were Dr Om Gupta dean writing who persuaded students to learn from the life of giants like Madhukar Gangadhar. Course director Harshvardhan presented the life membership of International Film And Television Club to the Guest and Dean AAFT paid vote of thanks. The event was supported by International Public Broadcasting Forum and International Film and Television Research Centre. 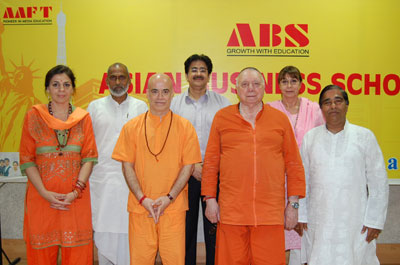 In a joint meeting of three International organizations Global Yog Alliance, World Religious Parliament and Asian Academy of Film and Television represented by their heads Gopalji, Acharya Satinder and Sandeep Marwah respectively, many new things have been finalized for the forth coming Global Yog Conference in the month of November this year.
The international tours of the organizational heads have convinced more than 70 countries to participate in this world Congress on Yoga. The three days event will take place at Gurgaon from 25th to 28th November. A large number of National and International organizations have already preparing for this powerful gathering. Many National Yoga setups, bodies, centers, associations have become part of the organizing committee.
“I am happy AAFT and Marwah Studios, our media family of 9000 people is now part of this international federation and working for the cause of Yog and spirituality” said Sandeep Marwah, President of Marwah Studios. “Many religious leaders have given their consent to be there on D day” said Acharya Satinder. “A centralized office in Delhi has been established to coordinate the work of this mega event” said Gopal ji. 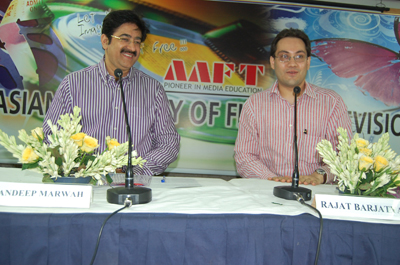 “I AM pleased to note that Asian School of Graphics and Animation has been added to the Asian Education Group for promoting training and education in new media,” said Rajjat Barjatya the fourth generation of Barjatya Group in Entertainment business in India while talking to the media students of AAFT in Noida Film City.

“We have already submitted a bunch of our short films to Rajshri Media, few more will be added to the lot in no time,” said Sandeep Marwah, president of Marwah Studios and director of ASGA. “We are probably the biggest training setup of new media in India, I want students to take best use of this setup,” added Marwah.

Rajjat Barjatya spoke about the importance of new media and changing trends in entertainment business. He invited students to get into better subjects so that their cinema can be used universally. Explaining the need of short films he said it is now the time for short films. He invited acting students to be in touch with him for better marketing through Rajshri’s new portal rajshritalent.com.

Sandeep Marwah brought Rajjat Barjatya on the board of Asian School Of Graphics And Animation. The event was supported by International Film And Television Club. 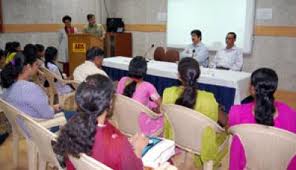 The team of Radio Noida 107.4FM has established a social setup under the name and banner of ‘Vigyan Club’ to promote scientific education in villages and in slums of Noida with the help of Ministry of Science and Technology.

“The idea is to uplift all those unprivileged students who are getting no opportunity to come forward in society” said Sandeep Marwah President of Marwah Studios-a creative enterprise and Chairperson of Radio Noida “We want to bring them to better facilities whether its education, science classes, radio programs, computer and dance classes, health awareness or personality development” Marwah added.

“I am taking personal interest in designing the whole program for these students from 15,16 and 17 sectors of Noida” said Brahm Parkash who has been visiting at slums to teach Radio Programs.

A special slot on Radio Noida has been sanctioned for the program prepared by the students from these areas. The activities are supported by International Children’s Film Forum. 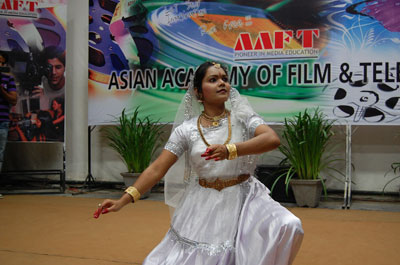 “No entertainment is complete without music and dance, People who want to sustain in this industry must have knowledge of music and dance” said Sandeep Marwah President of Marwah Studios and Director of AAFT while introducing young talented Kathak exponent Anjana Singha to young film makers on the third day of 68th batch of Asian Academy of Film and television at Noida Film City.

“India has vast Culture, every state has its ways and means to entertainment people. Every part of the country has different mode of dances and Kathak is one of the eight forms of popular Classical Dances in India” said Anjana Singha while answering the questions coming from film, TV and media students.

“Kathak word has derived from KATHA which means story and kathak is story teller, its story telling through movements” said Dean AAFT while appreciating the young lady who is well traveled abroad and performed two well prepared items in a jam packed hall.

“Every moment is a learning moment when you are in a film school, it is a wonderful opportunity not only for acting students but for all to understand movements, face reactions, expression matching with story theme” said Satish Anand, Dean Acting.

Later Anana Singha was presented with the life membership of International Film And Television Club by the institute. The event was supported by International Children’s Film Forum and International Public Broadcasting Forum of Asian Education Group.