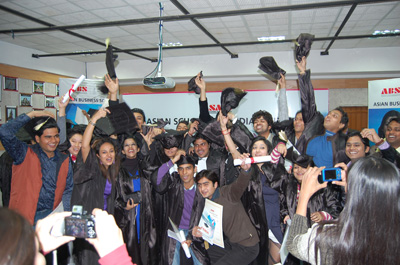 The well known Asian Media Personality Sandeep Marwah was honored in a grand function at Patna, the capital of State of Bihar for his untiring efforts in the field of Media Education and bringing the name of India to the World fame in general and promoting people from Bihar in the field of Media in particular.

“We need dynamic people to bring in enthusiasm in youth to promote and to encourage country men and more so ever people from Bihar” said H.E. Kailashpati Mishr the former Governor of Gujrat in the capacity of Chief Guest. “People like Sandeep Marwah must be honored for their sincere contribution towards the promotion of Bihar” said Dr. Jaganath Mishr the former Chief Minister of Bihar who was Guest of Honor at the award function.

The Third Bihari Asmita Award 2010 had taken place at Shri Krishan Memorial Hall before large audience of 2500 people from Patna and all over India. The Award function was followed by entertainment program.

Speaking at the grand event newly appointed convener of Indo American Relations at Marwah studios Om Gupta expressed that Sandeep Marwah deserves all awards for promoting Indo US relations through Films, TV and Media, his appointment as Chairperson of Entertainment Committee at Indo American Chamber of Commerce is just a gesture towards his efforts for this cause.

Marwah’s International Film And Television Club and International Film And Television Research Centre have lots of personalities as member, The director of Marwah Studios Anil Kapoor has been now working in Hollywood films after completing most popular TV series 24. The appreciation has been coming from all the corners of the World for Marwah’s extra ordinary works for Indo US relations.

The renowned actor and writer Aryaan Singh shared his vast experience of films and television writing with the students of Asian School of Media Studies invited by Ashok Tyagi dean Cinema.

“What ever you can write, you must write that is the first principal of writing in case you want to become the writers “ said Aryaan Singh. “Today every director has to be a writer to give his best” he added. Aryaan answered to all the questions of cinema students.

California based music producer and documentary film maker Sandeep Khurana recently released his 26th music album, “Zen Meditation Heal Spa”, another mystical blend of nature music with alluring soundscapes of flutes, piano, strings, guitars and ethnic instruments. The sounds from the album are soothing, uplifting, relaxing, and energizing, while having a mystical aura to them.
A versatile composer with a distinctive style, Sandeep Khurana’s psychedelic albums are cross-genre from Contemporary New Age, Neo Classical, Psychedelic and Easy Listening to Dance and World Music. His music is inspiring, has a mystifying feel and arouses deep emotions..
Sandeep Khurana’s previous releases include “In My Eyes Exalted World Dance Music”, “Mantra Chants on New Age Music”, a devotional album set to new age music, “Semblances and Me, World Music Album”, “Shiva Chants”, “Yoga Music in 10 Volumes: Music for Tantra”, and many others.
The music released by SK Infinity World Media, is available on popular online stores including iTunes and his songs continue being ranked high in iTunes Top 100 New Age Music Charts in UK, Norway, Mexico, and Sweden (source music-chart.info) since 2010. His music has been part of TV productions on STAR TV (for an Asian Reality Show), Channel V (for an Asian Reality Show), KMVT15 California TV Channel (Documentary on Green House), and other channels in Florida, and Chicago.
In 2009, he produced new age instrumental albums as a tribute to the Bollywood genius versatile artist Kishore Kumar titled “Kishore Kumar, The Gifted Voice Instrumentals” and to music composer RD Burman, titled “RD Burman, The Digital Way
”Originally from New Delhi, Sandeep Khurana studied music at prestigious schools including Ali Akbar Khan College of Music, USA and then pursued studies in Film Production, Direction and TV Journalism at (AAFT) Asian Academy Of Film And Television” informed Sandeep Marwah President of Marwah Studios, Noida Film City while congratulating him for his success. 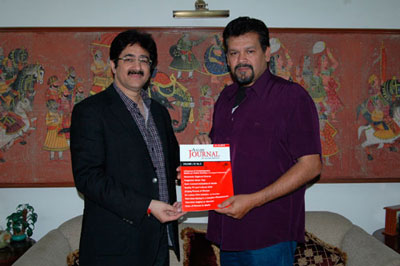 A well known Sydney based film maker Satish Rai visited Marwah Studios to discuss his next research programme in India. Satish Rai has been in journalism and films for a long time, has already produced 12 feature films & more than 150 episodes for different fiction and documentaries for Australian and Fiji television.

“My association with Marwah Studios is more than 10 years, when I came to India to find my routes in India’ said Satish Rai who is ready to share his vast International film and media experience with the students of AAFT and ASMS.

“Satish Rai is already a member of International Film And Television Club of AAFT and is on the International Board of Asian School of Media Studies” informed Sandeep Marwah President of Marwah Studios who interacted with other guests from Fiji and Australia at Noida Film City. 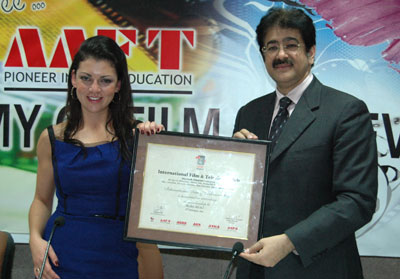 “Its important to look good and trendy so that you can move with this glamorous industry of film, television and media” said Sandeep Marwah President of Marwah Studios introducing Brazilian Fashion Designer Michele Michel to the students of Acting at Asian School of Performing Arts at Noida Film City.
“Wear what suits you, it is not necessary to wear expensive clothes, what you wear shows your esthetic sense, well dressed person is always well received in the community” some of the basic tips Michele Michel explained to the students while answering their questions. Michele Michel is operating from London the biggest fashion corridor of the World and has established her own brand from UK and UAE.
“Asian School of Performing Arts is immerging as one of the strongest acting schools in the world” said Satish Anand Dean Acting. “Not only that we teach powerful acting syllabus, we conduct workshops, seminars, interaction programs, film festivals, symposiums, visits, tours, technical training, film premiers, press conferences and directly connected to the industry” added Anand .
Michele assured that she will use talent from ASPA for her next fashion show in India. Lalit Kumar HOD Acting purposed vote of thanks.

Recently inaugurated organization Asian Academy Of Arts by Miss Universe 2010 Ximena Navarrete, will promote all different fine arts in India. The newly constituted setup is a part of Asian Society of Film And Television initiated by World renowned media person Sandeep Marwah the president of Marwah Studios and Director General of Asian Education Group.
“I have always believed that films and television business is not far from fine arts. They go hand to hand and rather film and TV business is incomplete without it” said Sandeep Marwah Chairperson of AAA.
“We have created five segments in this Academy inclusive of Writing Department, Music & Singing Department, Dance & Choreography Department, Painting and Sculpture Department and Drama Department” informed R.K.Singh Deputy Director Asian School of Media Studies.
“We have already initiated the works of Writing Department and ample has been done in just few days, enthusiasm and dynamism of Sandeep Marwah cannot be compared” said Om Gupta Dean Writing Department at Marwah Studios.
Asian Academy of Arts will be supported by International Film And Television Club, International Film And Television Research Centre, International Children’s Film Forum, International Public Broadcasting Forum and Radio Noida.

‘Rapid growth of population, discoveries and inventions, industrialization and urbanization has lead to environmental problems. It has effected the land and wild life and lead to water and air pollution” said Sandeep Marwah founder of film city Noida, film producer and educator at the opening of Wild Screen Film Festival at British Council New Delhi.

The Wildscreen Festival was founded by Sir Peter Scott in 1982 and has been organised every alternate year for the past 25 years. It is the world’s largest and most prestigious wildlife and environmental film festival. The festival was inaugurated by actor Kunal Kapoor.

The two-day festival screened six movies, including the BBC Life Series. It opened with the screening of ‘Can We Save The Planet Earth’, a 2006 movie presented by Sir David Attenborough. The screening was accompanied by seminar that focused on ‘Trends in wildlife & environmental filmmaking’

The movies screened in two days festival included ‘Extreme Ice’, on glacier melts from US directed by Noel Dockstader; ‘The Man Who Stopped the Desert’, a West African tale of greening the desert by Mark Dodd from Britain; and ‘The Wild Meat Trail’, an account of wild meat hunting and eating in northeast India directed by Rita Banerji and Shilpi Sharma.

Other films included ‘North-Eastern Diaries: Seeking Wildlife in the Eastern Himalayas’ from India by Sandesh Kadur, ‘How Earth Made Us: Human Planet’ from Britain by Matthew Dyas, ‘Wild: The Coral Gardener’ from Britain by Emma Robens, ‘Green’ from France by Patrick Rouxel and the BBC Life series on environment.

Chief executive of Wildscreen Festival, Richard Edwards, said I am happy to see the large involvement of public this time. Rob Lynes, director of British Council in India, said: ‘The British Council actively engages with environmental filmmakers as they play an important role to shape public opinion on key issues like climate change.’ Sandeep Marwah invited film makers to come forward with new and interesting ideas where Marwah Studios will support their projects.

Miss Universe Ximena Navarrete 2010 who was in India for Sanjana Jon Tour 2011 in India to promote social activities join hands with Sandeep Marwah and his media organizations to come forward in public for various social works.

“Me and my 10000 members of Marwah Studios family assure you that we are here to help and support you for any kind of community work you are planning any where in the world. Through our students we are availble in 80 countries of the World.” said Sandeep Marwah President Marwah studios.

“I am pleased that I could find such a humble family next door, our purpose of bringing Miss Universe completes here” said Sanjana jon an International fashion designer from New York who has been in social activities for a long time.

“I am now member of the family, another student from Asian Academy of Film and Television and representing Mexico in the count” said Miss Universe 2010 Ximena Navarrete while receiving the Degree –Post Graduate Diploma in Television Journalism and Communication from the Director General of Asian Education Group Sandeep Marwah.

“The complete entertainment industry depends on the relationship, the better relations we have with Americans the bigger business we can create with US” said Sandeep Marwah renowned international media personality & President of Marwah Studios at the Entertainment Session of 7th Indo US Economic Summit 2011 at hotel Lalit organized by Indo American Chamber of Commerce (IACC) at the capital- New Delhi.

Marwah divided the chapter into four segments of Willingness, Ability, Relationships and Modalities which restrict Indians to come forward and to go ahead with the joint ventures in entertainment and media industry whether it is films, television, events or other mediums.

Giving examples of more than forty occasions where Marwah has tried to built up wonderful relations with American Entertainment Industry through his film studios & media schools and thanked IACC for honoring him for his efforts to bridge the gap between two largest film producing countries of the World.

The session was presided over by Arvind Kumar Jt. Secretary Ministry of Information and Broadcasting , Government of India who explained many new achievements of the Ministry to the full house. Lalit Bhasin Summit Chairman and Managing Partner Bhasin & Co. purposed vote of thanks