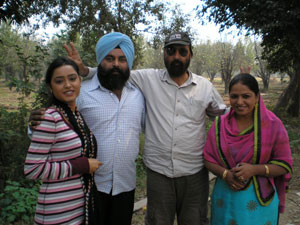 “Akhiyon Ton Door Jayeen Na is the first daily soap opera on any Punjabi Channel which has run for 144 episodes Monday to Friday with full Punjabi cast in a real Punjab environment” said Sandeep Marwah President of Marwah Studios and Co-Producer of the serial talking to the Punjabi speaking audience at the function organized by MIDI Excellence Awards at Jalandhar.

“It was a much awaited move. With Ankhiyan ton door Jayeen Na, Punjabi entertainment breaks new frontiers. Punjabi viewers have been desperately awaiting something that they can personally relate to, something that smells and tastes like their own culture, something that they have a sense of belonging to.” said Ravi Arora of ETC Punjabi.

The show on ETC Punjabi is fast growing into a hot favorite of all the Punjabis and the actor Navdeep Kaler is becoming a known face on Punjabi Television. Akhiyaan Ton Door Jaayin Na is directed by Gurbeer Singh Grewal, the director of the hit movies Bag Films’s Mannat and Marwah Studios’s Coffee House. The serial went on air in September on ETC Punjabi. The Serial is now retelecasted on ETC Punjabi five days a week. 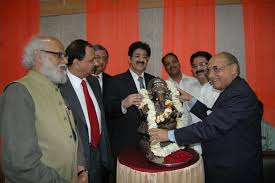 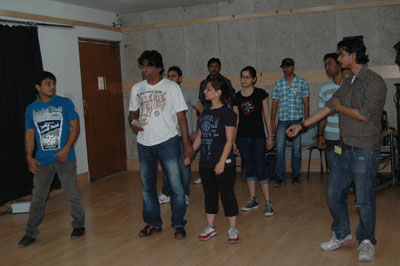 The renowned Dance Director from Mumbai Jojo Khan popularly known for his films like Dus Tola, Do Dilon Ke Khel Me, Zamanat, Jai Santoshi Ma, Pehchan, Ek Se Bar Kar Ek, Dil Hai Tumahra, The Legend of Bhagat Singh, Lal Salaam, Rahul and other 40 films was at Asian School of Media Studies, Noida to take a rigorous workshop in Dance and Choreography for the students of Cinema who all have a subject to prepare- a music video as a part of their syllabus.

“I am more than satisfied with the large attendance of cinema students to learn the art of directing music video by no less than a popular working professional Jojo khan who has been in the industry for many years” said Sandeep Marwah President of Marwah Studios and Asian Education Group while presenting the membership of International Film And Television Club to Jojo.

“We have lined up many professionals from different fields of Cinema to teach our students the real art of film making” said Ashok Tyagi Dean Cinema at Asian School Of Media Studies. 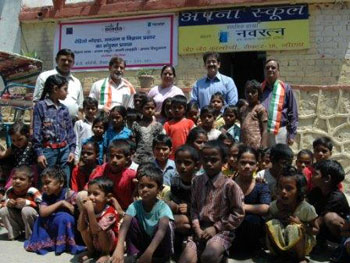 “International Children’s Film Forum has not forgotten its responsibility of helping the society by uplifting unprivileged children of slums through films and other mediums” said Sandeep Marwah President of Marwah Studios while inaugurating the 7th Branch of APNA SCHOOL in the slums of sector 18 at Noida.
The earlier branches of APNA SCHOOL are running in the slums of sector 15, 16, 17 and other villages of Noida. An organization started with 8 students a year back has achieved the target of 350 students who are getting free education in these schools.
I feel honored and satisfied what ICFF in association with Radio Noida putting its best to promote education for the unprivileged students. Education is the need of the day” added Sandeep Marwah who has always been a part of social activities in the capital New Delhi and suburbs.
The schools are administered by Ritu Sinha, full time teacher and social worker and supervise by Brahm Prakash of Radio Noida 107.4 FM. Others who were present there and spoke included Vimla Batham a social worker, Satpal Yadav (Adhayaksh – Jila kisan Morcha), Vijendra Nagar ( Jila – Adhayaksh), Sateesh Gautam (Jila – Mantri), Dimpal Anand (Adhayaksh – Jila Mahila Morcha) and R.K.Singh.

The great Hindu Religious leader and heart and soul of millions of devotees felt left out when the news of Sathya Sai Baba of being no more was declared by the doctors. Millions of people staying all over the World are in a state of shock after this news.

Thousands of people have experienced the power of Sathya Sai Baba, his extra ordinary miracles and his healing powers were immense. The super human who has been declared as the reincarnation of God of Kalyuga was indulged in social activities to grear extend. Number of schools, colleges, hospitals, ashrams all over the World and all sorts of community services are provided by the Sai’s organizations.

“Sathya Sai Baba will always remain in our hearts’ said Sandeep Marwah President of Marwah Studios and devotee of Baba who himself has experienced and seen many miracles of Baba at different occasions.

“We all pray that Baba may remain most loveable and remembered with this and the coming generations on earth for all time to come” Marwah added. 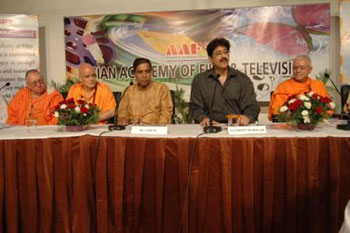 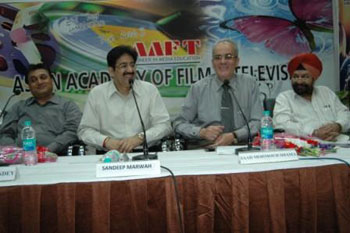 “It is my honour to be now part of the organization which has proved its credentials to the whole World in the field of media training” said Prof. Dr. Saad Mohmoud Shama Director of Egyptian Cultural Centre and Councellor in the Embassy of Egypt in the capacity of Chief guest on the formal opening of 71st batch of Asian Academy of Film And Television at Noida Film City accepting membership of International Film And Television Club.
Introducing the guest on the dice Sandeep Marwah President Marwah Studios and Director of AAFT appreciated the contribution and support he has been getting from the Entertainment Industry of many countries. “I am thankful to all those who have even contributed a single day at AAFT, are the part of our family. We have reached to 81 countries with our education system”
Others who spoke on the occasion were Amrik Singh Gill renowned Screenplay & Dialogue writer (Hum Dil De Chuke Sanam, Rab Ne Bana Di Jodi fame), A.S.Bedi Producer Director Writer, Joy Shre Arora renowned film TV Artist, Sudershan Pandey Educationist, Dean AAFT, Latika Sahani Dean Asian Business School, R.K.Singh Jt. Director Asian School of Media Studies, Om Gupta Dean ASMS, Satish Anand Dean Acting and Ashok Tyagi Director of Bharat Bhagya Vidhata, Return of Jewel Thief and Dean Cinema ASMS

The Team of University of Central Lancashire based in Preston United Kingdom visited here at Noida Film City to develop new relationship with the education setup of Marwah Studios in India.
Marwah Studios is in Films ,Television and Media Education for the last twenty years and popularly known as ‘Universe of Media Arts’ It has established Asian Academy of Film And Television, Asian School of Media Studies, Asian Business School, Asian School of Graphics And Animation, Asian School of Performing Arts and Asian School of Communication.
Where this education is supported by International Film And Television Club, International Film And Television Research Centre, International Public Broadcasting Forum, International Children’s Film Forum, Asian Academy of Arts, Asian Event Management, Asian Advertising Agency, Marwah Films And Video Production and Radio Noida.
The University of Central Lancashire is the fifth biggest University in United Kingdom as far as enrolments is concerned. It is ranked one of the best in journalism. Donald Stokes, Baron Stokes, industrialist and life peer, Mike Sutton (criminologist) Originator of the Market Reduction Approach, Kevin Silverton, head of news, BBC Asian Network, Mark Tattersall, television presenter Granada Reports, Jonathan Thompson, Presenter for shows on SKY, BBC & Nickelodeon, Don Warrington, veteran actor, William Watt (journalist), 2010 Digital Journalist of the Year are some of the pass outs of this university.
Both the institution joining hands to provide World class education in India in Media Studies including films, television and journalism soon. 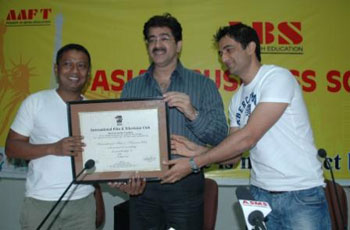 “I AM was something that we started as an experiment. We wanted audience participation right from day one till the day of the release. In a way, I AM has become a movement. In times when people have to say that such films should not be made and are least interested in them, I proudly say that there is actually an audience who puts in the money and makes a truly independent film happen. I AM is a purely independent film and I am proud of that” said Onir the Producer Director of the film
“I AM is also an approach and an attitude to stop the business of always complaining about ‘people aren’t buying our film’. If you have a good story to tell, you can make a film. Period! So whether I AM becomes an inspiration for many young filmmakers or becomes a case study of what to do and what not to do, one thing’s certain, I have learnt a lot from this process” said Sanjay Suri actor and producer of the film.
“I AM is about issues and dilemmas that bruise the modern Indian society. Unraveling and exploring these tribulations, the film unfolds many a tale of individuals struggling to find their identity, and uphold their dignity in a world that is callous, cold and unsympathetic” said Sandeep Marwah President of Marwah Studios and Co producer of the Film.
The film has Juhi Chawla, Manisha Koirala, Nandita Das, Rahul Bose, Sanjay Suri, Purab Kohli, Abhimanyu Singh, Arjun Mathur and others. The film is about to release in the month of April.

“We all are feeling very nostalgic. It is like once again coming back home, meeting old pals is so loving and soothing” said Sandeep Marwah President of Marwah Studios who was attending the Old Students Meet at Shaheed Bhagat Singh College of Delhi University on Saturday the 16th April organized by the newly elected body.
“I am trying to recollect the participation of old students during their academic years in the college, their dramas, competitions, awards and what not” said Prof B.C.Sehgal the Principal of the College who was entertaining himself the current and old faculty of the college including Prof. Om Gupta, M.P.Gupta, Dr.G.K.Kapoor.
“We are looking for the sincere participation of Old Students of this institution in the alumni meet, we feel it can be the strongest fraternity for all of us” said G.Gehani President of the Old Students Association and Director of PSL Limited.
Others who were present there included Nikhil Dujari Area Finance Director Alstom Projects India limited, Deepak Kapoor Chairman Pricewaterhouse Cooper Pvt Limited, Vikram Vasudev Marketing Manager RaveIndia, Capt. J.S. Gulliya Director Galaxy Academy and Resettlement Training (P) Ltd., Harinderjit Singh Partner Price Waterhouse, M.Yasin Cartolabs Print House and many more.