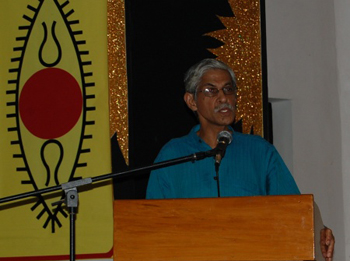 “We are ready to provide 52 free media workshops this year to all those schools in Delhi-NCR who are members of SPICMACAY to promote Indian culture and heritage” said Sandeep Marwah on the occasion of NCR- Delhi Meet of Schools at Modern School.
“We don’t want to loose the strength of our culture, our music and our traditions which has a long history of thousands of years” said Dr. Kiran Seth the founder of SPICMACAY offering traditional programs to all the schools to participate in big way to support the cause.
Representative of more than 200 schools attended the meet which was quite encouraging as most of the schools looking for Indian Classical music, traditional dances and instrumentalist programs in their schools and colleges.
Marwah offered the complete facilities of film, television and media to SPICMACAY through Asian Academy Of Arts. 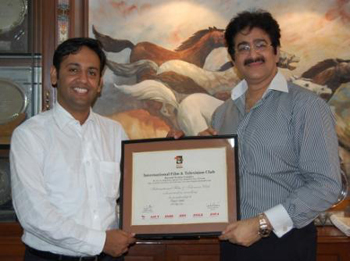 “It is very important to love your work which is the first step to be a big man- a millionaire” said Puneet Jindal the great motivator while talking to the students of Film Television and Media in the Master class at Asian Academy of Film And Television (AAFT) at Noida film City.
“Only those people achieve success who are always ready to face all sort of problems and prepared for unforeseen circumstances’ added Sandeep Marwah the President of Marwah Studios and World Record Holder in media while introducing Puneet Jindal to the audience.
The management of Asian Education Group comprising of AAFT, ASMS, ABS ASGA, ASPA and Asian School of Communication has always believed that it is important to give value addition to students along with hard core education and training in media. The session lasted for three hours. Marwah presented life membership of International Film And Television Club to Jindal. 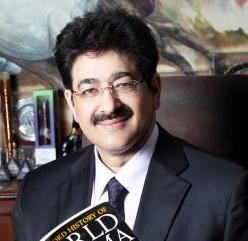 International Film And Television Club (IFTC), an organization to promote film and television business in India has announced the opening of its 71st AAFT festival of short Digital films in the month of August 2011 with the new directors and their films on the show.
IFTC has already created an International record with the 70th edition of AAFT Festival Of Short Digital Films and now will continue its credits with 71st edition of AAFT FSDF being the only festival in the World to reach now to its 71st edition.
Many national and international organizations are going to be the part of this event. This time the festival will be for two days inclusive of seminar, art exhibition, workshop and screening of the films. ”We are very excited that we could create a World Record and Marwah Studios has attained new heights in the entertainment industry” said Sandeep Marwah President Marwah Studios. 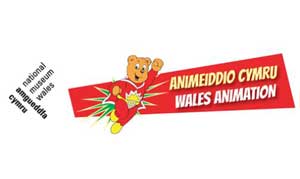 “I am pleased to announce the festival of student films from Wales next month, which will be attended by more than 1000 film and television personalities, students and international media” said Sandeep Marwah honorary Ambassador of Wales in India popularly known as Champion Of Wales.
International Business Wales, and Creative Business Wales are going to be the partners of the festival informed Sandeep Marwah who is also the Chairperson of Indo Wales Creative Forum. “We want to built a very pleasing and gripping relationship between the two- India and Wales, and develop an excellent cultural exchange too.
This festival will carry short films from different film and television schools of different universities from Wales as suggested by Creative Business Wales. The Indo Wales Creative Forum will host the event in association with International Film And Television Club of Marwah Studios.

“With the sanctioning of another 100 Television channels and 100 Radio Stations by Ministry Of Information And Broadcasting, Government of India the electronic media has not only become the biggest , broader but the most attractive medium of media” said Sandeep Marwah President of Marwah Studios chairing the seminar on ‘Class Room To News Room’ organized by the department of electronic media and journalism of Asian School Of Media Studies.

Present on the occasion the speakers and panelist Amarnath Amar (Doordarshan), Darin Shahidi (CNN-IBN), Frenklin Nigam (IANS TV), G.P.Selvam (consultant, Color Channel), Prasanjit De (CTV), S.Rangabashiam (Doordarshan), Sanjay Singh (CNEB), Shishir Sinha (Hindu, Business Line), Vinod Mishra (ANI), Vivian Fernades (CNBC-TV 18) gave their suggestions on how to improve the education in electronic media also to make it more effective, practical and job oriented. They all highlighted the basic and major problems faced by the recruiting agencies. Many also shared their experience and narrated case studies of all that happened with them during their entry into the industry. 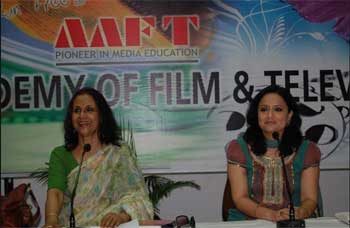 “Nothing moves unless and until you put your efforts and have positive thinking about your work” said Vaishnavi popularly known for her feature film Ladla with Anil Kapoor Veerana, Bumbai Ka babu, Danveer and popular serial like Shaktiman, Saturday Suspence, Sapno Se Bhare Naina, Karmyudh etc.interacting with the students of Acting at School of Performing Arts at AAFT.
“We need to talk to working professionals at acting institute so that students can relate them selves to the industry in short period of time” added Joy Shree Arora a renowned artist known for her historical roles in Hum Log, Buniyaad and as mother of Shahrukh khan in different films and serials now Dean Acting at School Of Performing Arts at AAFT.
“We are proud of are students who have not only achieved in the technical side but also created a niche for them selves in the field of Acting” said Sandeep Marwah President of Marwah Studios. Later students had a long question answer session with the guest.

“The orientation program of Asian Academy Of Film And Television provides a wonderful opportunity to students to interact with large number of media professional in short period of time” said Sandeep Marwah President of Marwah Studios and Director AAFT. “It relates students to the industry in no time” Marwah added.
Vineet Narain a renowned journalist popularly known for his first investigative videos news series Kalchakra and editor and coloumnist for many newspapers said,” the need to know and zest to explore can only make you a powerful journalist” he also added that “ to reach to the bottom of the story can only give finishing touches to the whole investigative journalism”.
The session was attended by the students of all the discipline. Later Sandeep Marwah honored Narain with the membership of International Film And Television Club. 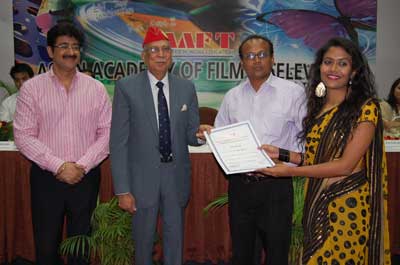 New Delhi. June 25, 2011. Sixty-eight film and television students were awarded the prestigious Asian Academy of Film and Television diploma at a glittering convocation at the Marwah Studios in Film City Noida.

It was the 71st batch that passed out in the two- decade long eventful history of this internationally renowned school that has produced more than 9000 media professionals from 81 countries across the globe.

Speaking on the occasion, former deputy chief of the Indian army General N.S.Malik paid rich compliments to the revolutionary growth that is evident in Indian mass communication, in particular the electronic media. He said because of the transparency and accountability of India media, Indian borders were safe and secured in the hands of the armed forces.

Sandeep Marwah, President Marwah Studios was proud of the growth and contribution that AAFT alumni has made and was confident that this process will continue with the outgoing batch as well.

Ravi Kumar, Chairman of Indian Translators Association acknowledged that the students who joined AAFT from Latin American countries like Peru, Mexico and Colombia were doing exceedingly well courtesy the training they got the Marwah campus.

Renowned photographer Dheeraj Paul said the training in still photography was of the highest standard that laid the foundation for the future film-makers among the alumni of AAFT.

Popular TV channel functionaries Atul Aggarwal of India News and katyayini of P7 invited the passing out students to come and join their media houses as AAFT students carry a high level of credibility.

Dean of AAFT proposed a vote of thanks and highlighted the events like fourth cellphone cinema festival and promised that the next session will be full of pleasant surprises. 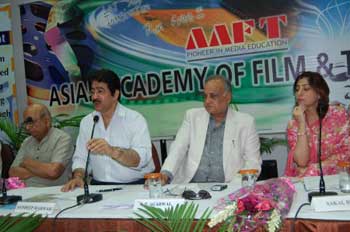 “Asian Academy Of Film And Television will become the source of strength for our new National venture of opening Chamber of Motion Picture And Television Producers in New Delhi” said T.P.Agarwal the First Vice President of The General Assembly of the Federation Internationale des Associations de Producteurs de Films (FIAPF), an apex body of Global Film Producers’ Association and President of FFI Film Federation Of India on the inauguration of 72nd batch of AAFT.
“T.P.Agarwal producer of many films and President IMPPA Indian Motion Picture Producers Association has brought many reforms and revolution during his tenure” said Sandeep Marwah President Marwah Studios and Director AAFT introducing Chief Guest Agarwal to the young aspirants of AAFT at Marwah Studios at Film City Noida.
Speaking on the occasion the renowned play write Reovti Sharan Sharma said “there is no alternate to hard work, creativity is counted when you are different from others”. G.D.Mehta the film distributor & the president of Motion Picture Association, Sakal Bhatt correspondence and newsreader at Doordarshan, and Vikas S Shukla from News 24 were the other guest spoke on the occasion.
Sandeep Marwah presented Life Membership of International Film And Television Club to all the guest who all later also inaugurated the exhibition of photographs on 3rd Global Film Festival Noida 2010. 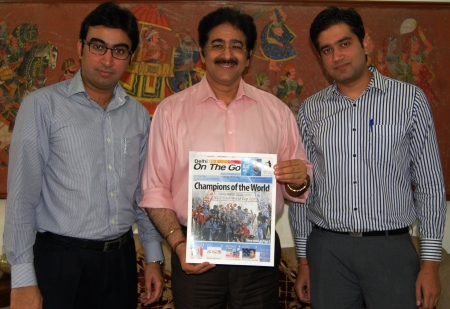 Two young Delhi based entrepreneurs Ankit Dhawan and Virat Mohan will be soon launching India’s 1st free and comprehensive daily English newspaper. ‘Delhi On the Go’ is also set to become the only newspaper for the Delhi Metro commuter.
The concept of a free metro newspaper is successful in major international metropolitan cities and it seems that the time is ripe for a concept like this to work in New Delhi, India.
The newspaper is named in line with their target audience – the ‘on the go’ time constrained commuter. Co-Founder Virat Mohan adds, “The newspaper will primarily target the Delhi Metro in the first phase.
The paper will be a 16 page full color edition and is designed to be a quick 25 minute read. The newspaper will cover news stories in brief on all segments like National, Business, World, Local, Showbiz and Sports and will also include 3-4 feature sections everyday from various interest areas such as Cars & Bikes, Health & Lifestyle, Religion & Spirituality etc.
Delhi on the Go has tied up with Marwah Studios as their Media partner and Radio Noida 107.4 FM as their official radio partner. On their association with Delhi On The Go, Mr. Sandeep Marwah, Founder Film City & Marwah Studios, said “ It is very rare and remarkable to find young entrepreneurs working for a social cause and community building , I wish them all the best “
Co-Founder Ankit Dhawan said “With Delhi On The Go, we aim to enhance the Delhi Metro Commuter’s on-board experience. Our future plans include targeting the airports, inter-state bus travelers, major intersections in the capital and the Indian Railways.”
When asked about the launch date the founders were tight lipped and commented “We will have another press release soon announcing the launch date”