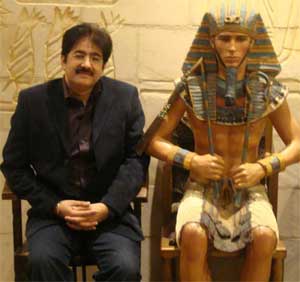 “I extend my heartiest congratulations to all the people of Egypt on their first day of the year, one of the oldest civilizations of the World” messaged Sandeep Marwah the President of Marwah Studios and Chairperson of Indo Egypt Cultural Forum as constituted by the Embassy of Egypt in India.
The history of relation between two countries is known to the whole World. Indo Egypt Cultural Forum has been created to further promote and develop the relations through art, culture and films.
Sandeep Marwah has taken a great initiative in different kinds of activities so that the awareness of Indian culture in Egypt and Egyptian Culture in India should be known by the common people.
Special meets, workshops, seminars, interaction programs, film festivals etc have been planned in the near future.

“I want to provide World Class facilities to the students of Asian Business School, so that they grow as international managers from the right environment” said Sandeep Marwah President Marwah Studios and Asian Education Group. “But never forget your own culture and traditions which are strongest in the World” added Marwah speaking to the young aspirants on the first day of education at Asian Business School at the new campus in Noida.
Speaking about the struggles and the hardships face by Marwah to reach at this status where he has been rated as International Media guru and recipient of more than 150 awards from all over the country and abroad, he emphasized on the Punctuality, regularity, sincerity and dedication. “Continuous efforts in the right direction can get you success” Marwah proclaimed.
The session was conducted by Dean ABS Latika Sahnii and followed by a very enthusiastic positive presentation by a young and dynamic leader and motivator Sachin Jindal of Rich Mind which is a global training and performance enhancement company.(www.abs.edu.in) 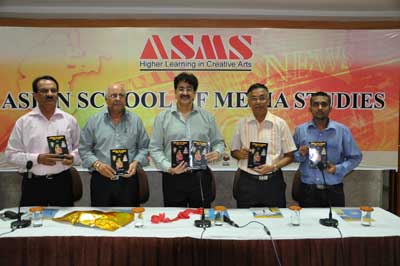 “Saturn or Shani has always been misunderstood by the people who believe in astrology. The facts are different, it is one of the most powerful garah out of nine.” said Sandeep Marwah President of Marwah Studios on the release of New Book “ Shani Ka Anugrah” written by Triloki Nath translated by A.K.Srivastav and published by Sagar Publication at Marwah Studios in a glittering function.
The event was supported by the Publication and Writing department of Marwah Studios who all are already into publication of news paper Delhi ‘On The Go’, Asian News Journal, Asian News Letter, Indian Dominion and Model & Trends Magazine, a portal batchbuzz.com and Asian News Agency.
The writer of the book Alishetty Trilokinath has mastered the art of astrology and is the receipient of Jyotish Tatnakar Award and Jyotish Tatvadarshan Award. Penta Anil Kumar an education consultant spoke about the book and its content. Others who spoke on the subject were Dean AAFT, Viney Kumar GM Marwah Studis and Sunil Parashar from Times Of India. 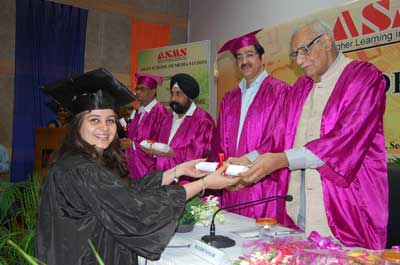 “No media can survive for long time without ethics. Media has always been considered as the fourth pillar in the developing economy like India. Have trust in your institution, in yourself and the strong traditions and culture of this country” said Kuldeep Nayyar the veteran journalist, writer, a former parliamentarian, Ambassador on the convocation of 6th batch of media persons passing out from Asian School Of Media Studies, Noida Film City.
“Have courage and stamina to fight for the wrong to show the correct path to the nation” said Manoj Raghuvanshi a television personality. “See for your self, think before you write or display any information. One wrong information can ruin the peace of the country” said Prof Avinash Singh Media advisor to many organizations. “A good knowledge of everything is the base of every program” added Prof. Obaid M. Siddiqui International Broadcaster & Director of A J Kidwai Mass Communication Research Centre.
“I congratulate every student for putting in best efforts during their tenure at ASMS. More than 100 scholars, Professors, Personalities, Socialites have trained these students. More than 400 productions have taken place to teach them film business, more than 100 seminars, workshops, symposiums, events, interactions, festivals, industry interface have been organized which are more than any IITs and IIMs of this country. I am sure of their success.” said Sandeep Marwah President of Marwah Studios.
“We at ASMS developing, promoting and encouraging film, television and media at international standards with all sorts of facilities” said Joint Director ASMS Prof .R.K.Singh. Others who spoke were Dean ASMS Prof. Om Gupta, Dean Cinema Prof. Ashok Tyagi, Prof. Rahul Sahgal, Prof. Sushil Bharti, Abhinav Mathur, Om Parkash. 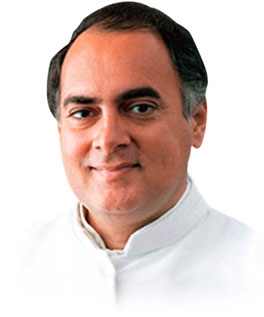 “We all are indebted to the late former Prime Minister of India Rajiv Gandhi for his extra ordinary contribution to the progress of this country especially in the field of communication and information technology” said Sandeep Marwah President of Marwah Studios and founder of Noida Film City to the film, television and media persons on the 67th birth anniversary of Rajiv Gandhi at Marwah Studios.
“The facilities and development available in these two industries have not only highlighted but uplifted the growth of our entertainment industry many folds” added Marwah remembering the time spent with late Prime Minister Rajiv Gandhi during eighties.
The day is also observed as “Sadbhavana Diwas” and Akshay Urja Diwas. Several functions across the nation are being held to pay tributes to the departed leader.
President Pratibha Devisingh Patil, Vice President Moahammed Hamid Ansari, Prime Minister Dr. Manmohan Singh, Lok Sabha Speaker Meira Kumar, Congress General Secretary Rahul Gandhi, Delhi Chief Minister Sheila Dikshit, and several other leaders paid tributes to Rajiv Gandhi at his Samadhi, Veer Bhumi, in the national capital. 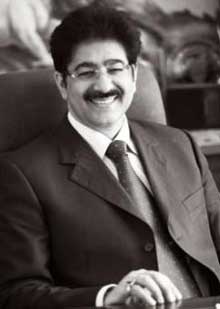 New Delhi.9th Sept: .India is the largest film producing country in the World, We produce more than 1000 films in 28 official languages, there are 12000 theatres and 15 million people see cinema every day. We sell 5 billion tickets every year and 3.5 million people are working in this industry” informed Sandeep Marwah President of Marwah Studios at Focus 2011 at the beginning of the seminar on Indian Film Industry specially planned on the occasion of 58th National Film Awards by ASSOCHAM.

Indian Cinema is well accepted by more than 60 countries and the whole World see Indian Cinema. “Foreign film production houses are finding the Indian film market attractive, according to President Pratibha Devisingh Patil. “Indian movie companies are also going global, finding new markets and deepening their existing presence” she said at 58th National Film Awards function.
“The medium of cinema imposes a great responsibility on everyone associated with the film industry to use the power of cinema to do good for society, through the portrayal of attitudes that help in building a tolerant and harmonious society” said Smt. Prathibha Patil President of India She stated creativity knew no barrier of age and the human spirit had always been striving for excellence.
Later Information and Broadcasting Minister Ambika Soni said the Government had moved forward in setting up the National Film Heritage Mission. The greatest benefit of the mission would be to enable the preservation of invaluable filmic heritage of the country which was an integral part of the socio-cultural.
The year 2013 would mark the centenary year of Indian Cinema as the country’s first indigenous feature film ‘Raja Harishchandra’ by DG Phalke was produced in 1913. This centenary would be a milestone in India’s cinematic journey and needed to be showcased and celebrated. 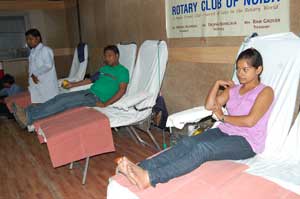 Hundreds of girls and boys students donated their blood in a specially organized camp at Marwah Studios campus here today. The camp was organized in collaboration with Rotary Noida Blood Bank.
Sandeep Marwah, President Marwah Studios congratulated the students for their humane gesture and hailed it as yet another initiative of the socially conscious students and faculty of AAFT, ASMS and ABS- the three prestigious schools of Asian Educational Society.
Dr Sameer Kumar, Medical Director of the Blood Bank expressed his gratitude at the large turn-out of the students despite heavy rains and recalled the long standing association with Marwah Studios.
Before donating the blood, the students were explained that periodcal donation doesn’t affect their health. In fact it keeps them hail and hearty. 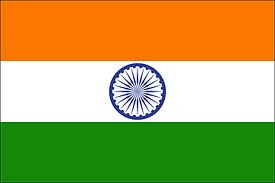 “At the stroke of the midnight hour, when the world sleeps, India will awake to life and freedom. A moment comes, which comes but rarely in history, when we step out from the old to the new, when an age ends, and when the soul of a nation, long suppressed, finds utterance. It is fitting that at this solemn moment, we take the pledge of dedication to the service of India and her people and to the still larger cause of humanity.” repeated by Sandeep Marwah President of Marwah Studios the words presented by Pt. Jawaharlal Nehru the first Prime Minister of India 0n 15th August, 1947.
Celebrating 65th Independence Day at Noida Film City with the students of Film, Television and Media, teachers and management of Asian Education Group Sandeep Marwah emphasized on the need to upgrade the society as far as culture, education and feeling of patriotism is concerned.
The whole campus was decorated with the tricolor flags and the environment was charged with patriotic songs by Radio Noida. The event was supported by Mahatma Gandhi Forum, Pt. Jawaharlal Nehru Forum, International Film And Television Club and International Public Broadcasting Forum.
Sandeep Marwah declared to open and support more tiny schools in slums and villages for free education to the unprivileged children this month in continuation to other seven schools supported by Asian Academy Of Film And Television under the banner ‘Apna School’.

“It is very important to be sincere in every work you take up. You must develop patience to grow in life. You have to be dedicated and honest towards your profession, the success is bound to come” said Sandeep Marwah International Media Personality and President of Marwah Studios at Noida Film City on the International Youth Day.
International Youth Day was designed by United Nation during the 1999 session and 12th August was declared as IYD. The day is celebrated to address the Youth of the World.
“We must keep our culture and heritage intact. We mustinculcate feeling of Patriotism. A country like India where we have 60 percent of the population as youth, the whole progress of the Nation depends upon how Youth thinks about the Nation” Marwah added while talking to the students of
Asian Education Group.
Later Marwah declared the scholarship after the name of hisfather ‘Shri Suraj Parkash Marwah Scholarship’ for deserving youth who wouldlike to join media. 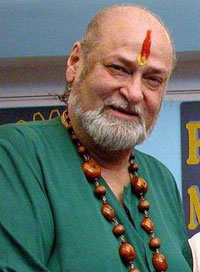 “I cannot forget the giant and huge presence of Shammi Uncle on the opening of Marwah Studios at Noida film City on 10th March 1991, where more than 1000 people were almost running after this great film personality leaving many top stars at side. He had that charm, that aura” said Sandeep Marwah President Marwah Studios on the demise of veteran actor Shammi Kapoor this morning.
“Its difficult to believe that Shammi Kapoor is no more. A single man who himself was an entertainment industry” Marwah added. Shammi Kapoor started his carrier in Prithvi Theatre with his father Prithiraj Kapoor. He was second to Raj Kapoor and elder to Shashi Kapoor.
Shammi Kapoor signed his first film as a hero with Chand Usmani in “Jeevan Jyoti”with Kardar film company, under the direction of Mahesh Kaul. Shammi Kapoor’s big success came with Tumsa Nahin Dekha which was released in 1957 followed by Dil Deke Dekho, Mujrim, Ujala, Singapore, College Girl, Boy Friend, Basant, Preet Na Jane Reet.
“Shammi Kapoor was one of the best appreciated actors of Indian Film Industry who raised the level of Indian Cinema to higher platform” emphasized Sandeep Marwah. Shammi Kapoor’s super hit films includes Teesri Manzil, Budtameez, Laat Saheb, An Evening In Paris, Tumse Achha Kaun Hai, Jawan Mohabbat, Prince, Brahmachari, Pagla Kahin Ka, Andaaz, Sachai, Pritam, Chote Sarkar, Jaane Anjaane.