The 4th Global Film Festival Noida 2011 will be full of events as planned by the organizing committee of the festival under the President ship of renowned International media personality Sandeep Marwah.
During the high powered meeting Sandeep Marwah nominated R.K.Singh, the Jt. Director of Asian School Of Media Studies as the Festival Director of GFFN2011. This is the third time that R.K.Singh will be performing as Festival Director. The former Engineer In Chief retired from Doordarshan, Ministry of I&B, Government of India who has been also associated with number of media organizations of the country.
The festival will showcase World Cinema, Indian Cinema, Director’s Retrospective, Cinema from Focus Country, Life Time Achievement Awards, Films on Children and Directed by Children, AAFT Festival Of Short Digital Films, ASMS Short Film Festival and WE CARE Films on Disability.
To make it more lucrative GFFN will have Workshops, Seminars, Exhibitions, Market Section, Book Releases, Daily Bulletin, Luncheon Meetings, Gala Dinners, Entertainment Programs, A Formal Inauguration, Grand Closing, Press Meets.
“We will leave no stone unturned to make this International Film Festival a grand success” said Sandeep Marwah in his closing remarks. 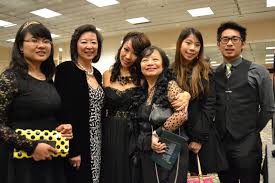 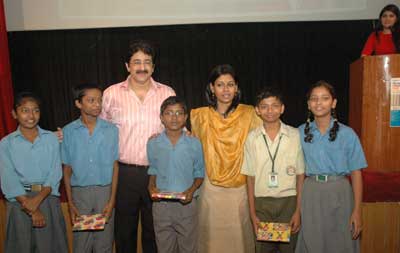 Not many films are being made keeping in mind the children of the nation and their development. We need more film makers to come forward and produce such films where we can relate to the issues of children” said Sandeep Marwah President of Marwah Studios and Chairperson of International Children’s Film Forum on the inauguration of Delhi Children Film Festival at SriFort .
Speaking on the occasion Nandita Das the Chairperson of CFSI Children’s Film Society Of India, Ministry of Information and Broadcasting, Government of India offered all the 250 films to the film societies to come forward and display the films to different segments and setups of Children.
Sandeep Marwah offered facilities of Marwah Studios free of cost to all those film makers who are keen in making films on Children’s issue. ICFF-International Children’s Film Forum has already offered its services to work hand in hand with CFSI Children’s Film Society Of India.
The festival was organized by CFSI in association with Cine Darbar. The kids were excited to learn that 8 exclusively chosen films will be screened at the festival out of which 2 would be screened on the first day. Apart from films the 6 different activities including workshops, film appreciation, competition and interaction will be held during the course of the three day festival. 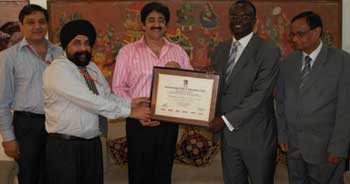 “AAFT our education brand is popular enough in media to attract people from all over the World, our reach is today in 82 countries of the World.” said Sandeep Marwah President Of Marwah Studios a creative enterprises while handing over the life membership of International Film And Television Club to Rev.Dr. Peter Ohene-Kyel the rector of the Pentacost University College, Ghana.
“We are here to join hands with Asian Education Group which has one of the finest media education centre of the World. I have yet to see the systematically growth of all the mediums of media under one roof. ”said Dr.Peter Ohene-Kyel on his visit to the campus at Noida Film City.
The Asian School Of Media Studies will plan student exchange, faculty exchange and joint film production to start with Pentacost University College.
The meeting was also attended by Prof. R.K.Singh Jt Director ASMS and Asian School Of communication, Kirit Sobti Managing Director K.S.Infosystems Private Limited and Prof. Avinash Singh Director General LESDEP Foundation, 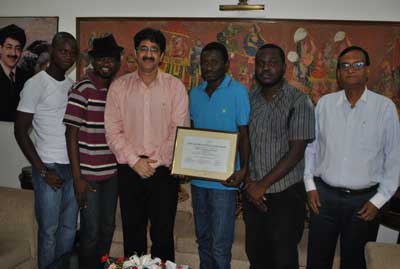 The members of the INFA Indo Nigerian Film Association met at Marwah Studios to sketch the yearly program of the organization along with the Chairperson of the centre Sandeep Marwah.
“Nigerian Film Industry is the second prevalent in the World after India and the best part is that they still have conviction in Indian Film Industry” said Sandeep Marwah Chairperson of INFA.
“We have invited Nigerian Film Students to come frontward and take the best advantage of film advancement of this industry in India” Marwah added while attending the annual meeting of the setup initiated by the Government of Nigeria in 2007.
Emmanuel Joseph, Afolabi Oyeleke Oyebanji, Busari Omogbolahano, Oluwasammi, Oluwasigun, Adeola, Kelvin Afi Lakoju, MS. Nkeeinnyere Violet Nweleu, Ea Wim danel Chike, Ayoife Oluwatobioni, and all the office bearers of the association attended the meet. 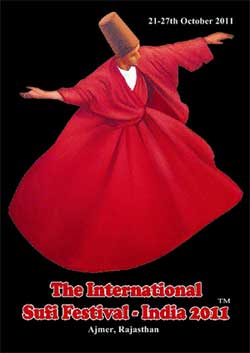 “The first International Sufi Festival at Ajmer from 21st to 27th October is full of cultural events so that a very vivacious environment can be created during this one week long festival.” said Gulsha Begum, director of the festival.
“Marwah Studios- A Creative Enterprises with its education centre Asian School Of Media Studies keeping no stone unturned to make this festival a popular one.” said Sandeep Marwah President Marwah Studios.
The festival will showcase performers, artists, crafts, fashion, poetry from local areas, other parts of India and abroad. It will enrich the festival with both- traditional and modern arts around the Sufi theme. Artists from various countries like Egypt, Germany, Pakistan, U.K., Russia and many more are participating in these cultural programmes which will be the highlights of this seven- day spiritual experience.
Each day of the event is dedicated to promote the message of Love, peace and Brotherhood through various art forms like Art and Photography Exhibition, Mehil-e- Sama, Geometric Paintings, Tribal Art Forms, Performing Arts- Dance and Theatre, Qawali and various discussions on social issues. 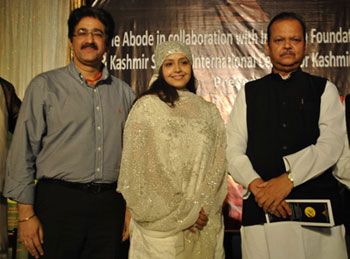 We are planning to start a Sufi Circuit in India which will not only promote Sufism but also bring thousands of tourists to better destinations in the country” said Subodh Kant Sahay Union Minister of Tourism, Government of India while inaugurating the First International Sufi Festival at Ajmer.
“We have already developed medical tourism and the biggest tourism in India is the religious tourism. Millions of people move from one place to another for the darshans of different religious places. We need to give now more emphasis to the same” Sahay added.
“Sufism teaches us Humanity, and every religion ultimately brings back to be a good human being. Let us change our thinking and feelings to work honestly to convert and renovate this earth into heaven” said Sandeep Marwah President Marwah Studios and Chairperson World Peace Research And Development Foundation.
Gulsha Begum the festival director expressed her desire to have many Sufi festivals in different cities of the country to unite India through Sufi Music. The inauguration was followed by speeches by Religious Leaders and dynamic performance by Sufi music group from Dargah of Ajmer and a group specially flown from Egypt. 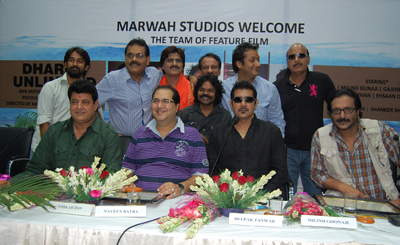 Students of Asian School of Communication- University of Central Lancashire, UK visited the production shoot of the feature film ‘Dharna Unlimited’ for a field experience. The film is produced by Deepak Tanwar and directed by Naveen Batra.
The students witnessed the working scenario of a production house and took part in the shooting process. It was an experience for the students and their enthusiasm knew no bounds when they got a chance to interact with Ehsaan Khureshi, the very well known comedian and other members of the technical team.
During the participation students of ASC learnt about the details of outdoor shooting and working on the Red camera being operated by Badshah Khan ( Wanted, Pathshala, Poison, Man fame) The various aspects of the shoot were explained to the students by Pankaj Rakesh, a film maker and also the course leader of Film Production at ASC.

The Asian School of Communication conducts under graduate and post graduate courses in Film Production and International Journalism in collaboration with University of Central Lancashire, UK under the leadership of renowned international media person Sandeep Marwah.

Indo Wales Creative Forum an organization to promote relations between India and Wales being operated from New Delhi fashioned by the Government of Wales joined hands with 4th Global Film Festival Noida 2011.
“The film festival has now reached to almost film, television and media persons of 82 countries of the World in last five years. It was Peace and Spirituality which was sheltered in the first festival, Documentary was the second, third time the prominence was on Children’s Films and now it is going to be the World Cinema.” informed Sandeep Marwah President of Global Film Festival.
The Wales Creative Business, Government of Wales through Indo Wales Creative forum recently had a festival of Welsh student films in India which was very well time-honored by the Indian film makers. Now the Welsh feature films will participate in Global Film Festival.
The participation of Welsh Films in Global Film Festival will bring in more silkiness in the cultural relations of two countries.

The seven year old association created by the Government of Nigeria to promote film, television and media business with India has now joined hands with 4th Global Film Festival Noida 2011 informed Sandeep Marwah President of Marwah Studios and GFFN.
Nigeria is now the second biggest film producing country in the World after India. Right now the emphasis is more on short films and digital film making which has to grow now more on cello lied. Nigeria has a US$ 250 million movie industry, churning out some 200 videos for the home video market every month.
Nigerian cinema is Africa’s largest movie industry in terms of both value and the number of movies produced per year. Although Nigerian films have been produced since the 1960s, the rise of affordable digital filming and editing technologies has stimulated the country’s video film industry. The Nigerian video feature film industry is sometimes colloquially known as Nollywood.