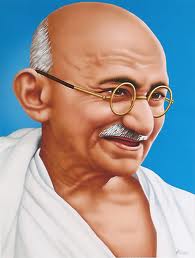 Raghupati Ragav Raja Ram, Pati Te Pawan Sita Ram’ chanting changed the whole environment in the auditorium at Marwah Studios, film city Noida in a program jointly organized by Mahatma Gandhi Forum and World Peace Development and Research Foundation to remember late Mohandas Karamchand Gandhi-the father of the nation.
“The last word uttered by Gandhi on 30th January, 1949 was ‘Hey Ram’. During all his life Gandhi always wanted unity and peace in the country. Lets work on those lines and fulfill the dreams of Gandhi” said Sandeep Marwah President of Marwah Studios to the young film makers.
The management of Asian Education Group announced ‘Sheela Marwah Scholarship’ for the deserving girl students on the occasion as it is also the death anniversary of Smt. Sheela Marwah. The event was supported by International Children’s Film Forum and International Public Broadcasting Forum. Marwah also announced the making of short films on the principals of Gandhi and a large collection of books at Sewa Ram Library at the campus. 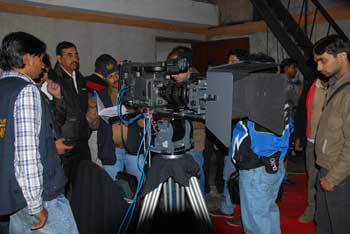 “Chori Ka Maal Mori Mein, a full length feature film will always be considered as the production of Asian School Of Media Studies, the first degree college of cinema of the Country” said Ashok Tyagi screen play writer and Director of the film also Joint Director of ASMS at Noida. “The inspiration of starting the film in this part of the country is from ASMS only”.
“We have left no stone unturned to provide best of the facilities to the film” said Sandeep Marwah President of Marwah Studios and ASMS. “The indoor and outdoor locations are all in in Noida, Greater Noida and Delhi” Marwah added.
The technical team headed by Ajay Sharma also taken students from Asian Academy Of Film And Television (AAFT) and Asian School Of Media Studies (ASMS) as their assistants in the film. “It’s a rare occasion when students are getting golden opportunity to work for a film which is to be shot completely in this area” said Ajay Sharma. 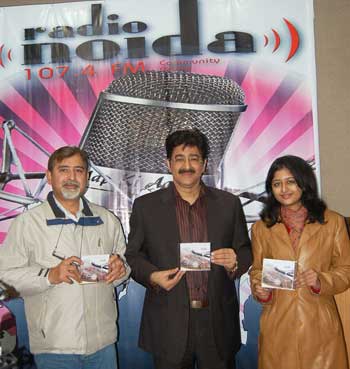 Radio Noida 107.4FM the most popular Radio Station of Noida catering to almost 2 million people of the city and surroundings have now decided to promote the folk music of this area in a big way.
A music CD has been designed to highlight the typical folk music of Uttar Pradesh composed, sung and music by Surendra Bhati & Nagar group which has been recorded for broadcasting.
“The purpose of the radio station is to give support to every section of the society which is looking for assistance and involvement to reach to the masses” said Sandeep Marwah President of Marwah Studios.
A formal launching of the CD had taken place on 1st January at Marwah Studios where Sandeep Marwah inaugurated the first of its kind in series of folk music planned this year.
The planning of this department will be taken care by the alumnus of Asian Business School Payal Singh MBA in Media Management. Brahm Prakash Director Radio Noida will invite folk music singers, musicians and music directors to come forward.