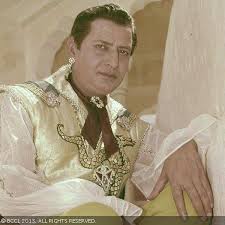 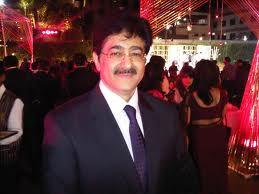 “To honor the 100 years of Indian Cinema, We are here to built up and develop the relation between two countries India and Nepal through Film, Television and Media. We are ready to adjust and accommodate the suggestions provided by the film, television and media persons of this country for the betterment of the joint programs of entertainment industry” said Sandeep Marwah President of Marwah Studios and Chairperson of Entertainment and Media committee of PHD Chamber of Commerce, a 107 year old organization to support the industry.
“We are planning to have two film festivals in Kathmandu, related to ‘Short Digital Films’ and other one ‘WECARE’ a festival of the films on Disability” added Marwah who is also the founder of Film City Noida and Director of Asian Academy Of Film And Television, a Premier film school of the India.
We want to offer the facilities of Noida Film City to all the film makers of Nepal at a much economical rates and want to use the locations of Nepal for our productions. A study tour is being planned by AAFT Asian Academy Of Film And Television for its students to visit the locations of this area.
We want the film associations which are looking more facilities from Ministry of Information and Broadcasting; Government of India, can join PHD Chamber of Commerce for better say. We want Nepali Film Association to come forward in helping us in organizing Festival Of Nepali Films in India.
AAFT can offer its facilities to all those film makers who want to make short films on the subject of Disability and Children’s issue under International Children’s Film Forum at no cost. We are also looking for joint ventures with Nepali film makers for a full length feature films. 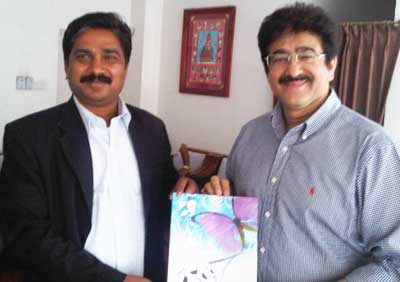 “A list of events and participations has been handed over to Raj Kishor Yadav, Minister of Information and Communications, Government of Nepal to promote film, television and media activities between India and Nepal in the next few months” said Sandeep Marwah President of Marwah Studios, who was there at Kathmandu on the invitation of I & C Minister of Nepal.
It will all start with the festival of Nepali Films at New Delhi. This is going to be the first ever film festival of Nepali films in India at Noida Film City. We have requested the minister of Information and communication to be the chief guest of the event added Marwah.
The festival will be followed by the announcement of the two seats for scholarship for short term courses in (acting & Presentation) and (Still Photography & journalism) at Asian Academy Of Film And Television, Noida for which the minister will decide the two deserving candidates from Nepal.
A festival of films on disability WECARE will also be planned at Kathmandu in short period of time for which the films have already been decided. 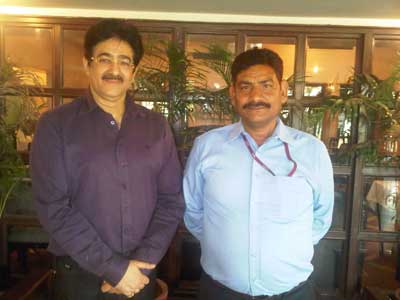 n association of around 400 film persons in the state of Uttarakhand nominated an International Media Person Sandeep Marwah, the President of Marwah Studios and Founder of Film City Noida as its Chief Patron to guide them better towards their goals.
Sandeep Marwah who is five times World record holder, producer of 1800 short films and teacher to 9000 media professionals accepted this honor during his visit to Dehradun.
“I am flattered to be associated with this film maker’s young organization and assure you that better days are ahead” said Marwah here at Hotel Madhuban, Rajpur Road, Dehradun in a small get together of film makers.
We are privileged to have Sandeep Marwah on our board. We are confident that under his leadership and direction we can rise to any heights” said S.P.Negi President of UFA.
Anuj P Joshi, a renowned film maker of Uttarakhand extended his thanks to Sandeep Marwah for accepting the Patron ship.

“It was immense pleasure to join hands with the great institution Asian Education Group at Marwah Studios which is no less than a University, where all can learn including the organizing capacity and International integration” expressed Tibor Kovacs, the Director of Hungarian Information and Cultural Centre in India on the closing ceremony of three days film festival of Hungarian films at Asian School Of Communication.

“What a pleasure to see the training facilities and supported by such festivals, Marwah University is indeed an international seat of learning” articulated Conann Fitzpatrick media professional and professor from Ulster University, North Ireland.

“While studying international Cinema you just cannot ignore Hungarian Cinema which has its own style and culture” uttered Ajay Sharma a film maker and newly elected President of GRAFTII. “We believe in discipline and cinema is no way away from it” added Brigadier Yogi Raj Tyagi now Secretary of Old Students Association of Mayo College Ajmer.

I am happy that films could create a great tourism between two countries” said Orsi Jarmy of Balassi Institute, Hungry. Sandeep Marwah President Marwah Studios presided over the function and narrated experience of his visit to Hungry as Jury Member. R.K.Singh of Asian School of Communication and of AAFT also spoke on the occasion.

Some of the finest films were shown during the festival including White Palms directed by Szabolcs Hajdu, The investigator by Attila Gigor, The Last Report On Anna by Maria Meszaros, Merry Go Round by Zoltain Fabri, Konyee by Gabor Rohonyi and Made In Hungaria by Gergely Fonyo. 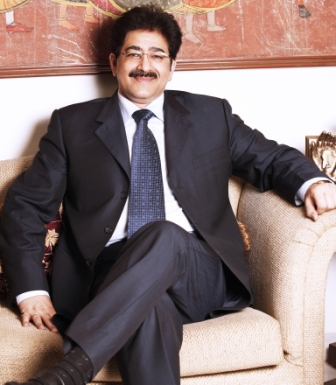 “We are here to look into the problems and requirements of film, television and media persons who want to make their suggestions for the betterment of this industry “said Sandeep Marwah President of Marwah Studios and Chairperson of Entertainment and Media committee of PHD Chamber of Commerce, a 107 year old organization to support the industry.

“We are planning to have two festivals in Dehradun related to Short Digital Films and other one WECARE which is related to films on Disability” added Marwah who is also the founder of Film City Noida and Director of Asian Academy Of Film And Television, a Premier film school of the country.

We want to offer the facilities of Noida Film City to all the film makers of this city at a much economical rates and want to use the locations of Uttrakhand for our productions. A study tour is being planned by AAFT for its students to visit the locations of this area.

We want the film associations which are looking more facilities from Ministry of Information And Broadcasting can join PHD Chamber for better say.

AAFT can offer its facilities to all those film makers who want to make short films on the subject of Disability and Children’s issue under International Children’s Film Forum.

“It’s been 9th year that we are working on the subject of disability through a special designed festival called WE CARE” said Sandeep Marwah President of Marwah Studios and the festival. Idea is to propagate this cause and reach to the maximum number of people to sensitize about disability added Marwah while introducing the program.
We have so far visited all over India and conducted more than 85 shows of best of the films along with different organizations to spread our motive to the whole country ”said Satish Kapoor Director of We care Festival.
It is not only Indian problem but an international issue. Every one must start thinking about how to get involved in promoting and creating awareness on this subject.” said Ronald Mosle from Germany.
The festival is supported by AAFT, Brotherhood an NGO, United Nation Information Centre of UN, National Trust of Government of India, International Film And Television Club, International Public Broadcasting Forum.
“I would like to give my time to this subject” held Niket a renowned dress designer. “It is the duty of media persons to help in every social issues of the Nation” said Dr. Aziz Burney Editor Sahara “.It is important to highlight this issue” said George Abraham CEO Score Foundation.

Powerful writing can change the thinking of the people of the Nation, this is what this book should do. The reality of society must be brought to the lime light” said Shriprakash Jaiswal Union Minister of Coal, Government Of India while releasing the book Begam Bano Aur Khatoon written by Rama Pandey at New Delhi.
“Muslims are projected not in the real sense by media, there are lots of misconceptions and all those must be cleared by the people of this country” said Javed Akhtar in a very emotional tone.
“This book actually reveals the current situation of Indian Muslim women who are often not given the opportunity to prove their real worth. Begum, Bano aur Khatoon is like a dream coming true for me” said Rama Pandey.
Film Maker Muzaffar Ali, Chairperson Hindi Sahitya Academy & Poet Ashok Chakradhar, Chairperson for National Commission for women Mamta Sharma were the Guests of Honour along with the presence of Ghazal Maestro Ghulam Ali who presented the related Ghazal.
Present on the occasion Sandeep Marwah President Of Marwah Studios and a World Record holder in Media offered to make a film project on the book. 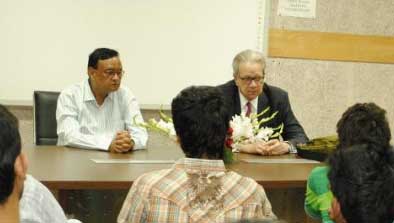 A renowned journalist and film maker and now Course Leader of department of International Journalism at University of Central Lancashire, Preston, UK conducted a special workshop and interaction with the students of Asian Academy of Film And Television & Asian School of Media Studies & Asian School Of Communication at Noida Film City.
“A wonderful opportunity has been brought for the students of media to earn British Degree in India by learning under Asian School Of Communication” said Sandeep Marwah President Marwah Studios and University Of Central Lancashire Media India.
“Students save time and money and also get chance to visit Preston, UK” said R. K Singh
Additional Director, Asian School Of Media Studies.
The interaction was followed by a gigantic question answers session by the students. Robert Beers explained the process of getting into British Market through ASC. 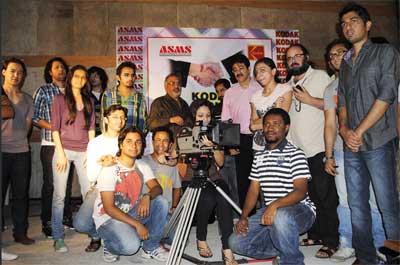 “We are happy to join hands with International company Kodak. These kind of workshops enhance the level of education” said Sandeep Marwah President Of Marwah Studios while inaugurating the five full days Cinematography workshop at Noida Film City.
“Idea of this workshop is to go beyond the syllabus of Camera at Asian School Of Media Studies. Teach them out of your professional experience and train them in new equipment and techniques” said Ashok Tyagi film director and Joint Director Department of Cinema at ASMS.
“The enthusiasm of the students at ASMS is worth praising. The zest to learn more is the key to a successful film maker” said Sanjeev Sood a renowned Cinematographer who has spent 20 years in the industry with Cameras. Students got wonderful opportunity to work on Cine Camera.