“There is no stamp of religion nor caste on the baby when he is born to mother, we, with our own wish, decide to divide the human beings into different categories but the reality is that we have one religion and that is humanity” said Sandeep Marwah President of World Peace Development and Research Foundation on the celebration of Humanitarian Day at Marwah Studios.

World Humanitarian Day is a time to recognize those who face danger and adversity in order to help others. The day was designated by the General Assembly to coincide with the anniversary of the 2003 bombing of the United Nations headquarters in Baghdad, Iraq, which killed 22 UN staff.
Every day humanitarian aid workers help millions of people around the world, regardless of who they are and where they are. World Humanitarian Day is a global celebration of people helping people.

“this years campaign ”I Was Here” is about making your mark by doing something good, some where, for someone else” said Secretary General Ban Ki moo.

“We are marching towards peace, friendship and harmony and will be successful one day in our mission to have cordial and strong relationship between India and Pakistan” said Awais Sheik a lawyer by profession and a writer of book ‘Samjhota Express’ at Asian School Of Media Studies, Noida.
“We are very open to such initiatives where issues of India and Pakistan friendship are discussed. We are happy that we could entertain number of Pakistani groups at Marwah Studios and could promote love and peace through films, art and culture” expressed Sandeep Marwah President of Marwah Studios and World Peace Development And Research Foundation.
Students of Asian School Of Media Studies were emotionally charged who are now ready to go to Lahore on the invitation of Awais Sheik for a friendly tour. Dr. Shobha Kulshrestra dean ASMS and Joy Shree Arora dean ASPA also spoke on the occasion.

United Nations General Assembly declared 29 August the International Day against Nuclear Tests by unanimously adopting resolution .The resolution calls for increasing awareness and education about the effects of nuclear weapon test explosions or any other nuclear explosions and the need for their cessation as one of the means of achieving the goal of a nuclear-weapon-free world.

”The Day is meant to galvanize the United Nations, Member States, intergovernmental and non-governmental organizations, academic institutions, youth networks and the media to inform, educate and advocate the necessity of banning nuclear weapon tests as a valuable step towards achieving a safer world” said Sandeep Marwah President of World Peace Development And Research Foundation.

UN Secretary-General Ban Ki-moon has stated with great clarity: “A world free of nuclear weapons would be a global public good of the highest order”
A special talk was organized to brief the heads of all the departments of Marwah Studios related to print, Radio, Television, Cinema, Events and education.

“It is our responsibility to build a better World by encouraging and developing youth for tomorrow. Today’s efforts will never go waste, rather we will have a peaceful and progressive World” said Sandeep Marwah President of World Peace Development And Research Foundation here at Asian Education Group celebrating International Youth Day 12th August as declared by United Nation.

The theme of International Youth Day 2012 is “Building a Better World: Partnering with Youth” — a global call to action to develop and engage in partnerships with and for youth.

Feature film Raja Harish Chandra, Aradhana, Manthan, Lahore and
I Am were screened at PHD house as a tribute to Indian Cinema on the occasion of celebration of 100 years of Cinema for the large number of enthusiastic ordinance on Saturday.
“I pay my salute to all the film makers of the industry who have brought the industry to this height & level from where we can fly to any stage, sky is the limit” said Sandeep Marwah Chairperson of Entertainment and Media committee of PHD Chamber of commerce
The program was inaugurated by the renowned screen writer and director, Dadasaheb Phalke Award Winner Shyam Benegal, all time favorite Sharmila Tagore, National Award winner Actor Farouq Sheikh and this year best film award winner Sanjay Suri. “we are indebted to all the dignities who have added a lot of strength to the program with their presence” stated Sandeep Somany President of PHD.
The screening of five films was followed by the interaction program by the film makers who answered many questions related to their films. “We will have more interactive programs like this in near future” added Sushmita Shekhar Secretary General PHD. “Entertainment and Media Committee is now pretty active at North” affirmed Yogesh Srivastava Secretary of the Committee.

“We are very lucky to get our support from many different international agencies and organizations when it comes to the issues of World Peace including film, television and media setups” said Sandeep Marwah President of World Peace Development And Research Foundation on the auspicious day of EID at international headquarters at Noida.
Wishing Eid to the supporters Marwah declared the participation of Indo Wales Creative Forum, Indo Nigerian Film Association, Indo Peru Cultural and Film Association, Indo Egypt Cultural Forum, Indo Sudan Cultural Forum, Indo American Chamber of Commerce, World Trade Centre, ASSOCHAM, PHD Chamber off Commerce in the forthcoming events of WPDRF.
World Peace Development And Research Foundation will work on different projects to bring peace and harmony on the World map. 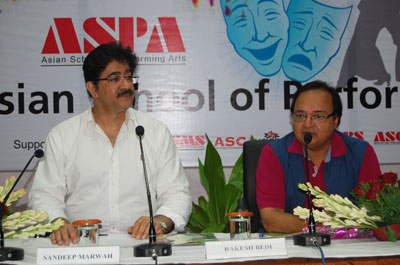 In a series of guest ASPA- Asian School Of Performing Arts a part of AAFT- Asian Academy Of Film And Television invited a renowned actor Rakesh Bedi for a full day workshop and to have interaction with the students of One Year acting course at Marwah Studios.
“To know more about acting, film industry and the environment prevailing in the television industry it is not only important but essential to have interface with the working professionals” said Sandeep Marwah President of Marwah Studios introducing the guest to the acting students.
Rakesh Bedi is an Indian film actor and television personality. He started his career as a supporting actor in the 1979 film Hamare Tumhare starring Sanjeev Kumar, and then went on to act in over 150 films and a couple of TV serials. Some of his most memorable roles were in the 1981 film Chashme Buddoor and in the TV serials Shrimaan Shrimati and Yes Boss, Yeh Jo Hai Zindagi. He had a little role in Gulzar’s Mere Apne and he has also acted in a number of Punjabi movies such as Main tu assi tussi.

“Pt. Jawaharlal Nehru Forum of Asian Society of Film And Television would like to honor all those women who have contributed in the development of the society in this region” said Sandeep Marwah President of Marwah Studios, Noida Film City here on the occasion of 19th All India Women’s Conference at Noida in the capacity of Chief Guest of the event.
“We are pleased to have an international personality with enormous media records who has not only guided us but motivated the whole group of women to do different kinds of social activities” stated Raksha Shukla President of the Chapter.
Sandeep Marwah announced a special slot for Women’s program in Radio Noida 107.4FM where women achievers will be interviewed. A special jury will be selecting the names of the awardees for the coming program on 14th November.
Prominient women Dr. Aparna Basu, Kalpakkam Yechuri, Kamala Gil, Veena Malik, Aruna Sood, Poonam Dhilon,. Indu Relhan,. Indira Sharma were also present on the meet. 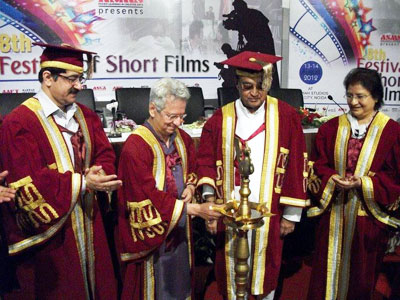 “Need of the hour is the development of the society. Growth of downtrodden, education to poor and maintaining stable economy through peace and love is the requirement from the youth of this nation especially media persons who can play better and bigger role in the developing society” said Syed Sabti Razi former Governor of Jharkhand in his convocation address at Asian School Of Media Studies at Noida Film City.
Film Schools nourish their students like mother her son, respect your alma matter. Every success story of a film maker has a beginning and it starts with his film school or first film” expressed Kumar Sahani a legend of Indian Film Industry emphasizing on the culture studies of India
“ Have left no stone unturned to bring best to this media degree college, now we want students to work hard and be honest to their profession to be successful in their life” stated Sandeep Marwah President Asian Education Group.
Students of MSc and BSc in Cinema, Multi Media, Mass Communication and Electronic Media accepted their prestigious Diploma from Asian School Of Media Studies.