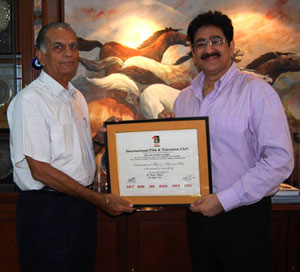 Dr Daman Prakash, Consultant of IFFCO Foundation and former Director of ICA Regional Office for Asia-Pacific now on the advisory board of World Peace Development and Research Foundation of Asian Society of Film And Television, India, informed Sandeep Marwah President of the foundation.

“It is now increasingly recognized that the co-operative system in India has the capacity and potentiality to neutralize the adverse effects emerging from the process of globalization. After economic liberalization under the new economic environment, co-operatives at all levels are making efforts to reorient their functions according to the market demands” said Dr. Daman Parkash while accepting the membership of International Film And Television Club.

“The failure of the public sector in several cases is a worrisome trend. Privatization has also failed to make an impact in the rural areas. Therefore there is great hope on the co-operative sector’ added Dr.Daman Prakash. 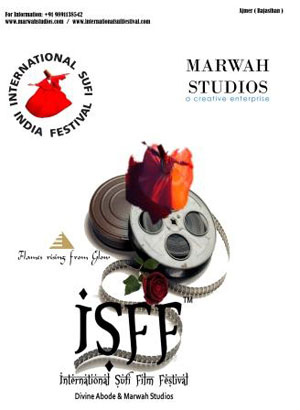 The Holy City Ajmer is geared up to host International Sufi Film Festival 2012 on the land of Khwaja and The Lord Brahma from 4th October 2012 to 11th October 2012 in Ajmer City of Rajasthan.
The International Sufi Film Festival – Divine abode & Marwah studios as per schedule to screen Films from 5th October to 11th October 2012 at 12 PM as per schedule announced. International Sufi Festival India continues to be a commemorative fiesta to the honor of the Sufi saint Hazrath Khwaja Moinuddin Chishty. The stunning concepts and symbolic messages merging with the soothing music and dance makes it a must visit..
The ancient Sacred city of Ajmer hosts the Isfi Festival annually to commemorate the life and teachings of the great Sufi saint Hazrath Khwaja Moinuddin Chishty . Ms Gulshaa Begum, Chairperson Divine Abode is known for her contributions in the field of Sufi Art & Culture and commitment to serve for the social cause through festivals and Art Exhibitions in Ajmer. Isfi is today Regarded as one of the spectacular event with a strong visual appeal. The Festival is a true crowd puller as thousands of people gather here to be a part of the 7 day event.
The essence of the preachings of khwaja Saab includes the unification of the human soul with the Ultimate through the medium of sufi music. As a result, this mega festival abounds in music and dance performances by the dervishes (ascetic Muslim monk). The harmonious dance and melodious music joins hand to create a sublime atmosphere in the entire air.
.Get ready to be a part of a spiritual journey that is superbly rich in artistic value and touch. This unique concept of attaining the divine with dance is something that needs to be explored and felt. The festival will showcase performers, artists, crafts, fashion, poetry from local areas, other parts of India and abroad. It will enrich the festival with both- traditional and modern arts around the Sufi theme.
Artists from various countries like Egypt, Germany, Pakistan, U.K., Russia and many more are participating in these cultural programmes which will be the highlights of this seven- day spiritual experience.

“I on behalf of State of Chhattisgarh invite you all to the state to come forward and invest for new projects in the fastest growing state of the country” said Dr.Raman Singh Chief Minister of the State at Taj Palace where a well planned Global Investment Summit & road show was organized by the Government of Chhattisgarh for the investors.
“Chhattisgarh is the 6th biggest state in India and is growing at the rate of 10.5 percent” Chief Minister added. A high power delegation from PHD Chamber of Commerce headed by Sandip Somany the President of the chamber met Dr. Raman to discuss different projects of business.
In the meeting President PHD invited Dr. Raman Singh to the Chamber and requested him for the allotment of land in his state for the chamber building. Sharad Jaipuria, Ravi Wig, N.M.Kejriwal, Jasmohan Singh, Pradeep Tandon and Sandeep Marwah were other members of the delegation.
The Government of Chattisgarh was represented by Rajesh Munnat Minister of Commerce & Industry, Baijendra Kumar Principal Secretary, Sunil Kumar Chief Secretary, Shivraj Singh Vice Chairman Planning Commission and others. 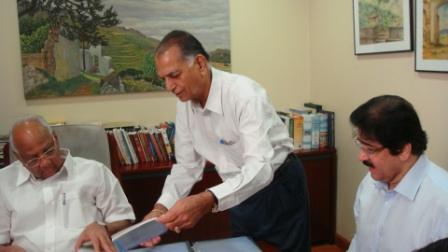 A six member delegation of World Peace Development And Research Foundation (WPDRF) Called on Hon’ble Minister of Agriculture & Food processing industries Sharad Pawar at his office to give him a large idea about the forthcoming programs of the foundation.
The president of the foundation Sandeep Marwah briefed him about the International Conference on Co-operatives to be held on 5 and 6th December 2012 at NCUI auditorium at New Delhi. Sharad Pawar admired the theme of the conference.“ NEHRU’S CALL : PROMOTING A CULTURE OF CO-OPERATIVE ENTERPRISES VOLUNTEERING A BETTER WORLD” . He also congratulated the Foundations vision and needfull activities towards uniting, serving,purifing and representing Co-operatives around the world.
The members of the delegation includes Vice President R.K.Singh, Secretary- general Chandrakant Kharade Patil, Coordinator Dr.Shobha Kulshestra, Brahm Prakash of Radio Noida and advisor and former head Internatonal Cooperative Alliance Asia Pacific Dr.Daman Prakash. The minister showed his keen interest in the success of the conference.

“The hectic and tense life today in this World has made man slave to machines and problems leading to restlessness and impatience. What we are looking for is a peaceful community and a calm nation” said Sandeep Marwah President of World Peace Development And Research Foundation which recently got recognition from United Nations for its activities at a International Debate at Noida Film City on the occasion of International Peace Day.
The International Day of Peace, also known as World Peace Day, is observed annually on 21 September. It is dedicated to peace, and specifically the absence of war and violence, The day was first celebrated in 1982, and this tradition is continued by many nations, political groups, military groups, and institutions and peoples all over the World.
Remembering Father of the Nation, Mahatma Gandhi, the WPDRF of Asian Society Of Film And Television announced 21st to 2nd Oct as Peace Observing Days in association with United Nation.
The International Debate “Importance of Media and Co-operative Enterprises in the process of International Peace” was participated by dr. chandrapal singh yadav (Ex-MP) Vice Chairman, International Co-operative Alliance – Asia Pacific, V.R. Patel Chairman, Krishak Bharati Co-operative Limited (KRIBHCO) Dr. Dinesh Chief Executive, National Co-operative Union of India (NCUI) Dr. M.L. Khurana Managing Director, National Co-operative Housing Federation, Vinay Kumar Managing Director, National Federation of Co-operative Sugar Factories Ltd. (NFCSF) Dr. Daman Prakash Former Director, Agriculture Co-operative Management Programme – ICA and Pran Mohan Parvatiyar, Additional Secretary-General, The Indian Federation of U.N. Associations.

Some of the prominent personalities of State of Uttar Pradesh were honored with Ratna Award at Lucknow the capital of Uttar Pradesh for their untiring efforts for the promotion of society informed Prakash Nidhi Sharma the organizer of the program and President of All India Conference of Intellectuals.
“It is my honour to present the award to the dignities who have spare their time, money, resources and efforts to do something or other worthy for the benefit of the society-there is nothing more than the service before the self” said Lt. Gen. K.M. Seth the former Governor of Chattisgarh in the capacity of Chief Guest at Lucknow while presenting the awards to States Achievers.
Bringing film and television education and training to the World level and attracting students from 90 countries to U.P. at the most cost effective programs, Sandeep Marwah deserves more than an award announced the coordinator.
“I am so thankful for bestowing upon me a state award, it has added more to my responsibility towards my state” expressed Sandeep Marwah an international media person. 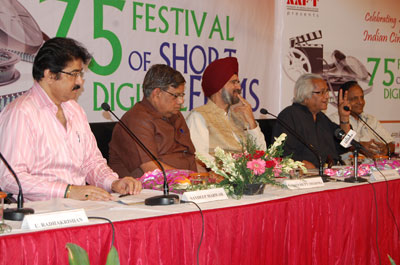 The second section of 75th AAFT Festival of Short Digital Films was the selection of some of the finest films from the last 74 edition of the festival consisting of 14 films by different directors who have already created a niche for themselves in the industry.
“We have some of the best selection of films from all over the World as the festival has more than 1500 films in its entry list from makers of 90 countries in two English and Hindi language” stated Sandeep Marwah President of the Festival and producer of largest number of short films in the World.
“Seeing achievements today I am proud to be associated with Marwah Studios” said Dalbir Singh National Secretary All India Congress Committee inaugurating the festival retrospective. “What Sandeep Marwah has done it is even hard to think. His far sightedness has given country a new film city and followed by many extra ordinary achievements” expressed Deo Dutt former Chairman Noida emotionally.
“There is no destination to success, you can do what you can think” affirmed Satya Sewak Mukerjee. ”We now will wait for the 76th AAFT FSDF” said U. Rahakrishan. “Binding so many films from so many countries through so many film makers is a real international integration” added Dr. O.P.Shukla former Addl. Secretary and now supreme Court lawyer.

“Think good feel good so that you can do good karmas and put your best efforts to convert this earth into heaven” said Sandeep Marwah president of Marwah Studios to all the young media persons on the occasion of Ganesh Chaturthi celebrations at Marwah Studios Campus. “I wish you a wonderful start in your career on this auspicious day” Marwah added.
Ganesha Chaturthi also known as Vinayaka Chaturthi, is the Hindu festival celebrated on the birthday (re-birth) of Lord Ganesha, the son of Shiva and Parvati. The students of Asian Education Group participated in the formal ceremony.
It is believed that Lord Ganesh bestows his presence on earth for all his devotees during this festival. Ganesha is widely worshipped as the god of wisdom, prosperity and good fortune and traditionally invoked at the beginning of any new venture.The festival also known as Ganeshotsav. The festival lasts for 10 days, 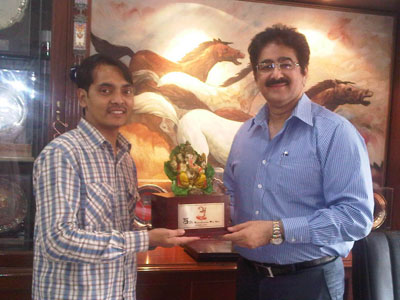 Sandeep Marwah has been the source of inspiration for all those who wanted to be in the field of films, television, Arts and culture at any stage of time. Marwah is associated with number of associations and organizations all over India and abroad.
Through his own recourses and planning he has been promoting young and old talents of this country and also the recipient of numerous international and National awards.
“We are proud to be coupled with Sandeep Marwah who has created wonderful international records and brought the name of the country to a batter platform” said Pankaj Narayan the President of a cultural setup called ATH who handed over their most prestigious award to Sandeep Marwah for his untiring efforts for the promotion of Art and Culture.
“Receiving award means more responsibility towards nation and humanity” said Sandeep Marwah an international renowned media personality. 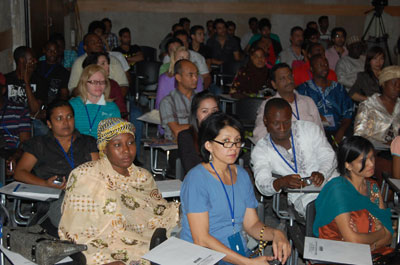 India is the largest film producing country in the World. We make approximately 100 films in 28 official languages. There are 12000 theatres in the country and 1.5 million people see cinema every day” said Sandeep Marwah President of Marwah Studios to a team of 40 students from 23 countries, which is part of NIESBUD program visited Marwah Studios for film workshop as a part of their training.
NIESBUD is an apex institute in the area of entrepreneurship and small business development under the Ministry of Micro, Small & Medium Enterprises, government of India. The basic objects for which the Institute has been established are- promotion and development of micro, small and medium enterprises including enhancement of their competitiveness through different activities.