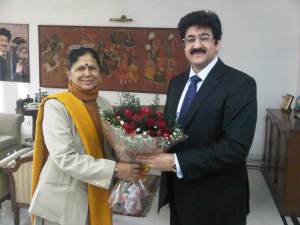 Asian Education Group believes in giving opportunity to every one to prove their caliber whether it is for heading the department or the festival itself. This time Dr Shobha has been unanimously appointed as the Festival Director of Global Festival of Journalism Noida 2013” alleged Sandeep Marwah, President of Marwah Studios.
Dr Shobha has been in education for more than 30 years and has been associated with number of national & foreign Universities. She has been working for different mediums of media for different media houses. She has a vast experience in managing media houses in India and abroad.
Dr, Shobha is currently working as Dean of Asian School of Media Studies and looking after school of Cinema, Journalism and Multi Media. The first ever Global Festival of Journalism Noida is from 12th February which has been declared as the international day of journalism by Asian Education Group. 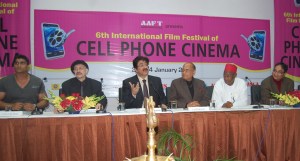 “I have never seen before this concept of Cellphone cinema and that too at an international level. I am amazed with the size of work has been done in this field. I congratulate the complete team” said Lalit Bhasin the President Indo American Chamber of Commerce and Chairperson of the Film Certification Appellate Tribunal while inaugurating the 6th International Festival of Cellphone Cinema at Film City Noida.
“We would love to have you all in the state of Kano in Nigeria to celebrate with us the Nigerian Films. It is going to be the amalgamation of Indian and Nigerian Cinema” said Dr. Danburam Abubakar Nuhu Commissioner of Commerce, Industry, Cooperatives & Tourism Government of Kano State.
“Many people have started festival of Cellphone Films in last seven years of its inception by Marwah Studios and AAFT but they could not touch the scale like this” expressed Prof. Karl Bardosh of Tisch School of Arts, New York University.
“It is easy to start the concept but it is difficult to continue the traditions. This is our 6th festival and it has grown much bigger in size. Around 500 entries from all over the World illustrate the interest of masses in the subject” said Sandeep Marwah President of the Festival.
Ashish Wig Chairperson Infrastructure Committee of Indo American Chamber of Commerce, Atul Vyas Secretary General IACC, Vinay Kumar MR. India Body Building, R.K. Singh of Asian School of Communication and Dean AAFT also spoke on the occasion. 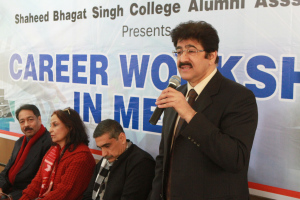 “It is our moral responsibility to give back to our institution which has given us every thing to make our career” said Harinderjit Singh President of Old Students Association of Shaheed Bhagat Singh College on the opening of Media workshop at the college premises.
A special workshop has been planned by Asian Education Group in Media for the current students of the college inaugurated by the acting Principal Dr.P.K.Khurana. “we need more participation of alumni to built up better network” he said.
“I am proud to be an alumnus of SBSC and thankful to the management to provide me the opportunity to serve the college” said Sandeep Marwah President of AEG.
The workshop was conducted by the media experts Joy Shree Arora, Nitin Saxena and Pankaj Rakesh of Asian School of Communication in different fields and mediums of Media. 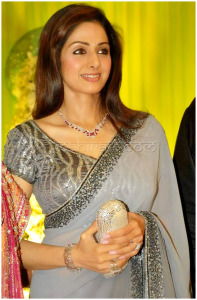 “We are proud of Sridevi Kapoor who has been the member of the Board at Asian Education Group Noida on being awarded Padma Shri Award” congratulated Sandeep Marwah on behalf of complete Marwah Family.
Sridevi who made a sensation comeback to the silver screen with the blockbuster film, English Vinglish is continuing with her award winning ways. The actress has been awarded the Padma Shri Award – the fourth highest civilian honour in the country- this year in recognition of her stellar services to Indian cinema.
Asian Education Group consisting of Asian Academy of Film And Television, Asian School of Media Studies, Asian School of Communication and Asian Business School shall be celebrating the success on her visit to the campus. 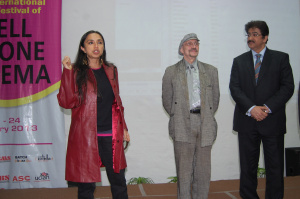 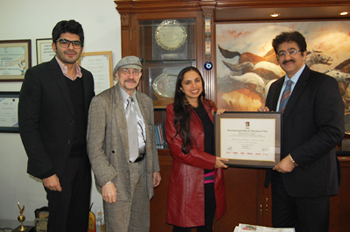 A USA Based Film Maker Shonali Bose impressed the film students with her way of expression when she was talking to them about her works including feature film AMU at Asian School of Media Studies at Noida Film City.
Amu is her feature film debut which she had written, produced and directed. Amu released in India in January 2005 receiving popular and critical acclaim. It then went on to premier at the Berlin and Toronto Film Festivals amongst many other international festivals.
Shonali Bose has won 7 national and international awards for Amu including the FIPRESCI Critics Award, National Film Award for Best Feature Film in English and Gollapudi Srinivas Award for best first-time director.
Sandeep Marwah President of Marwah Studios honored her with the life membership of International Film And Television Club. CEO of Marwah Studios Akshay Marwah and Faculty Karl Bardosh were also present on the occasion.

“I am so privileged to be part of this first convocation of Asian School of Communication which will very soon see the bigger and brighter light under the leadership of Sandeep Marwah” said Karan Singh Chauhan Deputy Chief Executive Officer NOIDA while lighting the lamp at Marwah Studios Film City Noida.
“I wish them great success and a very bright future. There British Degree from ASC-UCLAN is valid all over the World. Sky is the limit” added Karl Bardosh a writer, director educator from New York University.
“We are proud that we are associated with the fifth biggest university of United Kingdom. University of Central Lancashire and our association is almost a decade old” said Sandeep Marwah President of the School.
Renowned actor Joy Shree Arora, Head of the School R.K.Singh also spoke on the occasion. Namrata Bagga conducted the program. All the members of faculty, administration and students were present there to witness these historical moments.

A general board meeting was held at Marwah Studios at Noida Film City to finalize many points concerning the first time festival on journalism not only in Inda but In Asia from 12th to 14th Feb, 2013.
“This is the first time in India and Asia a festival of this nature has been designed to bring in World Journalism under one roof” said Sandeep Marwah President of the festival and renowned international media personality. “We are probably the second festival in the World of that kind” Marwah added.
We are feeling elevated announcing 12th February as International Day of Journalism said Sandeep Marwah motivating his complete team from Asian Academy of Film And Television, Asian School of Media Studies, Asian School of Journalism and Asian Business School. 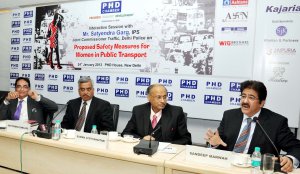 An interactive session was organized by the infrastructure committee of PHD Chamber of Commerce under the leadership of Ashish Wig. PHD invited Satyandra Garg IPS Joint Commissioner Delhi Police to give a talk on “Proposed Safety Measures for Women in Public Transport”
The subject was introduced by Suman Jyoti Khaitan President PHD Chamber who stated that there is a need to give rethinking to the unorganized crimes and daily hindrances which women suffer in public transport.
“We are putting our best to provide a comfortable situation to every citizen possible. This is only possible when residents support us in maintaining the law and systems” said Satyandra Garg IPS to the large number of women gathered to discuss their grievances.
“Education is the real remedy. We have to once again indoctrinate moral education in schools and colleges so that we have better citizens joining industries. Respect for elders, women, space to kids everything will come to lime light” added Sandeep Marwah renowned media person. The program was conducted by Ashish Wig and Ranjeet Mehta.