International Mother Language Day has been observed every year since February 2000 to promote linguistic and cultural diversity and multilingualism declared by UNESCO.
“Languages are the most powerful instruments of preserving and developing our tangible and intangible heritage” said Sandeep Marwah Ambassador of International Human Rights Organization affiliated to United Nation and International Bar Association.
“ All moves to promote the dissemination of mother tongues will serve not only to encourage linguistic diversity and multilingual education but also to develop fuller awareness of linguistic and cultural traditions throughout the world and to inspire solidarity based on understanding, tolerance and dialogue” added Marwah talking to the people from all states of India and abroad at Noida Film City.
“In this age of new technologies, books remain precious instruments, easy to handle, sturdy and practical for sharing knowledge, mutual understanding and opening the world to all. Books are the pillars of knowledge societies and essential for promoting freedom of expression and education for all.” expressed by Irina Bokova, Director-Genera of UNESCO. The event was supported by World Peace Development And Research Foundation. 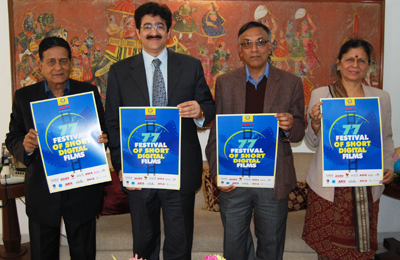 “I wish you a great luck on achieving an extra ordinary level by launching 77th AAFT festival of short digital films, the only festival to touch 77th edition in the World” said Prof. Harshvardhan while releasing the poster at Marwah Studios Film City Noida.
“We have gone out of way to save the series of this festival and reached to 77th edition which is an international record now” said Sandeep Marwah President of Marwah Studios.
The festival shall screen few short films on the inauguration on Monday the 25th February at Noida Film City. Dean AAFT and Dr. Shobha were also present there at the time of launching. 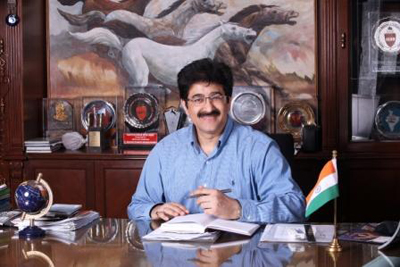 “Social justice is an underlying principle for peaceful and prosperous coexistence within and among nations. We uphold the principles of social justice when we promote gender equality or the rights of indigenous peoples and migrants” said Sandeep Marwah Ambassador of International Human Rights Organization affiliated to United Nation and International Bar Association at Marwah Studios.
“ We advance social justice when we remove barriers that people face because of gender, age, race, ethnicity, religion, culture or disability” Marwah added throwing example of how cast, creed and religion column he has deleted from his institution’s prospectus from last twenty years.
For the United Nations, the pursuit of social justice for all is at the core of our global mission to promote development and human dignity. The adoption by the International Labour Organization of the Declaration on Social Justice for a Fair Globalization is just one recent example of the UN system’s commitment to social justice. The Declaration focuses on guaranteeing fair outcomes for all through employment, social protection, social dialogue, and fundamental principles and rights at work.
The General Assembly proclaimed 20 February as World Day of Social Justice in 2007. The event was supported by World Peace Development And Research Foundation. 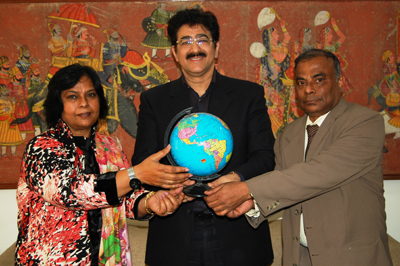 “There is hardly a participation of Indian Sports in International level. We are far behind of even many small countries. Developed sports facilitiy not only is going to make healthy India but also wealthy India” said Sandeep Marwah President of Marwah Studios and Patron to Indian Sports & Cultural Society addressing to the youth of India at Noida Film City.
“We need enthusiastic people to come forward and help us in fulfilling a dream of India being on the World Map of sports” added B.K.Bose Secretary General of the organization.
“We have to make it a point to encourage students right from the school to get involved into the sports so that we can produce better athletes in the country” expressed Chitra Dalal Vice President of ISCS. 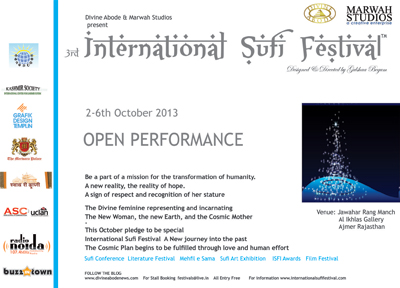 The International Sufi Festival India in its 3rd year will celebrate the Glory of Shekinah. Divine Abode and Marwah Studios is proud to set aside the ISFI festival this year as a honor to the Feminine facet of the Divine.
Sandeep Marwah while speaking to the gathering today in New Delhi said that ‘This year each one must chart a programme to be a element of this great festivity in Ajmer. The Festival has a special theme mainly for women.
”Women must be glorified as every woman is a light of Shekinah, Ganga, Ilah or a Durga. Every Glory to the Divine should be set in purity. Money is the Root cause of all evil and until we remain selfish in our giving we can never become selfless. So the open performance was opted towards this goal’ says Gulshaa Begum, Chairperson Divine Abode & Festival Director ISFI
The Festival will comprise of Film Festival, Literature, Stalls will be available at nominal rates, Talks on Awareness, Art Exhibitions, and Musical Concert in the evenings
.
The Festival begins from 2 – 6th October 2013 from 11 am – 10 pm at the Jawahar Rang Manch, Ajmer. Scholars, Philosophers, Artist, Singers, Musicians, Film Makers, Writers must visit the festival this year. All entry free for all events. 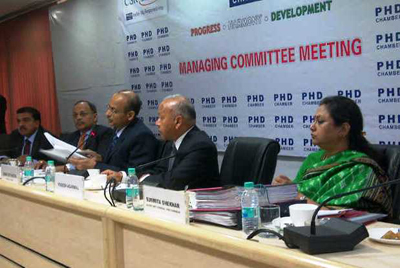 “Our Dynamic Chairperson of Entertainment and Media Committee Sandeep Marwah recently visited Nigeria as State Guest and brought the name of PHD Chamber of Commerce & Industry to better platform” said Suman Jyoti Khaitan President of PHD during the Management Committee Meet.
The Governor of Kano State along with a high profiled delegation recently visited India and invited Sandeep Marwah to Nigeria to develop Indo Nigerian Film Association. Needless to say that Nigerian Film Industry is now one of the fastest growing film industries in the World.
“I am thankful to PHD for trusting me to that extent. I will prove myself to the expectations of our members of PHD” said Sandeep Marwah President of Marwah Studios.
The meeting was attended by Senior Vice President Sharad Jaipuria, Vice President Alok B Sriram and Secretary General Susmita Shekhar also.

There are many organizations who have agreed to support the 77th Edition of renowned AAFT Festival of Short Digital Films to be fixed for 25th February 2013 at Marwah Studios at Noida Film City.
International Film And Television Club presentation will be hold by International Film And Television Research Centre, International Public Broadcasting Forum, International Children’s Film Forum, International Journalism Centre and World Peace Development And Research Foundation.
“Film makers of more than 100 countries have been informed and intimated about the 77th AAFT festival of short Digital Films during the last three months. Some of the most well made films will be screened after the formal inauguration of the festival” informed Sandeep Marwah President of the Festival.

Global Festival of Journalism Noida 2013 constituted Global Journalism Awards under the chairmanship of Sandeep Marwah with some prominent people of the media and society.
“It was decided to encourage and appreciate some of the journalist who have done extremely well in last years on this occasion of International Day of Journalism and formation of first ever Global Festival of Journalism in Asia” said Sandeep Marwah President of the Festival.
Vinod Sharma of Times of India Group, Sudhir Talang Cartoonist, R.P.Raghuvanshi of Chetna Manch, Kumar Rakesh, Parimal Kumar, Sanjeev Chauhan ,Vipin Gaur of Newspaper Association of India, V.S.Kanan of Asian Academy of Film And Television, Nitin Saxena of Asian School of Communication and Dr. Kapoor of Asian School of Media Studies, Sunil Parashar PR Agency, were among the best journalist of this year. 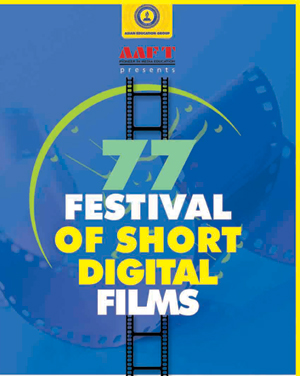 The most popular festival of Short Digital Films under the banner of Asian Academy of Film And Television has been announced by the board of directors of Marwah Studios today.
This is the only festival in the World which has reached to 77th Edition and is being organized four times in a year. This festival has given opportunity to more than 1000 directors to showcase their debut films from all over the World.
“20 years back we launched AAFT festival of Short Digital Films with an idea to show case the films of young directors. I am happy many out of them has become big directors and directing their feature films” added Marwah while finalizing the date on Monday, the 25th February 2013.