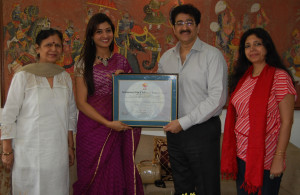 We have been working on the different prospects of Social issues, this time our emphasis is on the Women, and it has induced us to open International Women’s Film Forum at Asian Society of Film And Television” said Sandeep Marwah President Marwah Studios welcoming the suggestions from all over the World.
The International Women’s Film Forum will look into all those issues which are concerned Women be it at professional level or at social. The aim of the organization is to facilitate and increase the contribution of women to public life and to promote equality of opportunity for women in all aspects of life.
“The above aims can be fulfilled through co-operation and co-ordination, to strengthen links between women’s groups, while also attempting to expand membership which is truly representative of women’s organisations and by providing a forum for the expression and exchange of views, to formulate policy statements and act as a conduit to Government, both national and local” Marwah added.
Alka Lamba former Secretary All India Congress Committee, Anjali Ada renowned Poetess and Dr. Shobha will initiate the forum. 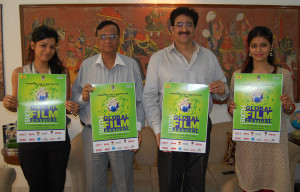 The dates have been blocked for the 6th Global Film Festival Noida 2013 from 11th November to 13th November and now the management will jump for grand preparations” announced Sandeep Marwah the president of the festival to take up the matter to the next show.
We have reached to the International standards where we have been declared as the most happening film festival of the World as declared by Supran Sen member of the Governing Council of International Film Festival Association.
The members of Asian Education Group, Marwah Studios, and international organizations were there to attend the first meeting of 6th Global Film Festival Noida at Noida Film City where first poster of the festival was released in the presence of large association’s head. 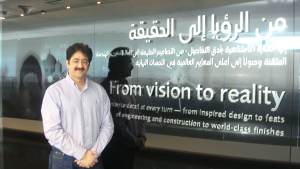 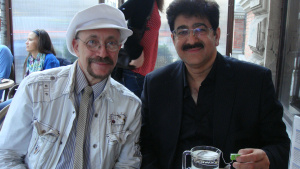 Marwah Films And Video Production has churned out number of joint ventures including feature film Coffee House directed by Gurbir Grewal, Nazuk Sa Modd directed by Adeep Tondon, I AM directed by Onir, Riyasat and Derd e Disco Directed by Ashok Tyagi and now under production a Documentary directed by Capucine Henry.
Sandeep Marwah has recently finalized another documentary with Karl Bardosh who is the Master Professor in Tisch School of Arts New York University, USA. The research work is on very soon. Karl will be visiting India to finalize his team from young film makers. The documentary will be covering Indian subject and shall be shot in North of India.

“It was a natural choice for UNESCO’s General Conference, held in Paris in 1995, to pay a world-wide tribute to books and authors on this date, encouraging everyone, and in particular young people, to discover the pleasure of reading and gain a renewed respect for the irreplaceable contributions of those who have furthered the social and cultural progress of humanity” informed Sandeep Marwah Ambassador of International Human Rights Organization affiliated to United Nations and International Bar association at Asian Education Group, Noida.
“ In this respect, UNESCO created both the World Book and Copyright Day and the UNESCO Prize for Children’s and Young People’s Literature in the Service of Tolerance” Marwah added and promised to support education with World Class Library which already contains more than 4000 books by now. All the departments have been instructed to make a fresh list of books required in each section.
“All forms of books make a valuable contribution to education and the dissemination of culture and information. The diversity of books and editorial content is a source of enrichment that we must support through appropriate public and protect from uniformity” said Irina Bokova of UNESCO. 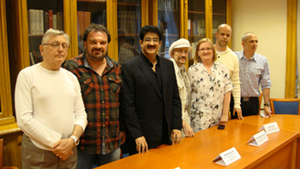 Sandeep Marwah has been the first Indian to be nominated as the Co-President of the Jury for any of the film festivals in the country of Hungary. He had the honor to be on the dice with Oscar Winning Director Jiri Menzel from Czech Republic along with Hollywood Writer Director Jeno Hodi, Film maker from New York Karl Bardosh and others.
It was a great pleasure to share wonderful time with giants of World Cinema” expressed Sandeep Marwah.” I had the pleasure to share the dice with Oscar winning Hungarian Writer Director Istvan Szabo five years back in Hungary itself and learned a lot” added Marwah.
Sandeep Marwah has been representing country of India as jury member in many festivals including Cairo-Egypt, Mons-Belgium, Gdansk -Poland and also been on the jury of National President Film Awards. Sandeep Marwah has designed 10 festivals of International level.

“Asian Education Group has always believed in the love and respect for mother Earth. The place where we live in is the house of every human and we have to save every bit of it” said Sandeep Marwah Ambassador of International Human Rights Organization affiliated to United Nations and International Bar Association.
“I am more than happy to be part of International Film Festival SHOOT 4 EARTH at Hungary where the aim is only to explore the possibility of How To Save The Earth through films” added Marwah while talking to the National Press on his return from Hungary where he was Co President of the Jury and also honored with Shoot4Earth International Media Award.
International Mother Earth Day is a chance to reaffirm our collective responsibility to promote harmony with nature at a time when our planet is under threat from climate change, unsustainable exploitation of natural resources and other man made problems.” said Ban Ki Moon Secretary General of United Nations.

Shoot4Earth an international competition held at Hungary received 110 entries from 11 countries had to be screened for pre jury under the leadership of festival Director Gobor Kindl which later were selected and decided by the international jury under the President ship of Jiri Menzel an Oscar winning Director from Czech Republic.
Asian School of Media Studies of India created a wonderful name for its self when Best International Film Award went to this Indian film SAVE EARTH from ASMS directed by JUSTY and Best Director Award went to BHUMIT GUJAR for his film DRIED OUT. The films had to reach to communicate Save The Earth.
The students and faculty of Asian School of Media Studies are celebrating the success with great pomp and show. It has brought the name of Asian School of Media studies to one of the best Media Schools of the World. 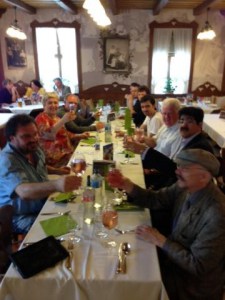 Villany.21.04.2013 “It was long due to launch Indo Hungarian Film Association to have better and stronger ties between two countries through art, culture and films” said Sandeep Marwah President of Marwah Studios while inaugurating the organization at wine producing town Villany on his visit to Hungary
“We here at Villayn Town starting this association and I pray this association last for all time to come” added Gyula Takats the elected Mayor of Town Villany. The event took place at one of the most popular restaurant F.UlemuleCsarda in the presence of Oscar winning director Jiri Menzel.
Gobor Kindl festival director of Shoot4Earth Jeno Hodi Chairperson of Budapest Film Academy, Szel Moni of Pixel TV, Kovesdi Szilvia and Fatima of Halasi Pince Panzio the hostess of the event, Prof. Karl Bardosh of New York University, Albert Marsalko Peter of Marsalko Foto a digitalis Valosag and others also opted for the membership and were witness to this historical event. 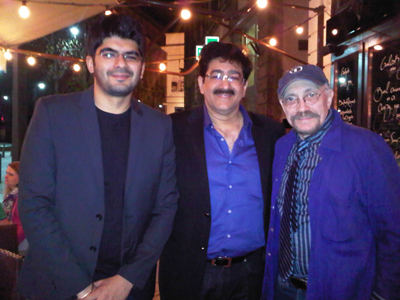 Sandeep Marwah is the first film maker from India to be invited by the State National Network Television MTVA (Musor TV) of Hungary in their most popular Breakfast show for live program called “Today Morning” at their station at Budapest.
Talking at the show Sandeep Marwah explained about his second visit to Budapest as the Vice President of the Jury for the Competition cum Festival Shoot4Earth to be fixed for 20th and 21st April. It was five years back that he was invited for the same festival titled Shoot4Life.
The program was also attended by Jury Member Karl Bardosh educationist and film maker from New York. The program was telecasted to whole of Europe. The concept was very well appreciated by Beatrix Siklosi Chief Advisor, Director, General Directorate.