The renowned Media personality and great devotee of Lord Krishna Sandeep Marwah was honored today with the Patron ship of ISKCON–International Society for Krishna Consciousness by the Global Minister Sankirtan and Padayatra His Holiness Loknath Swami at ISKCON Temple Noida.

“Honest Karma is the key to success. God helps those who help themselves. Work sincerely and leave the results to Lord Krishna” blessed Loknath Swami appreciating the social side of Sandeep Marwah.

“The real blessings are when you fulfill the desires of needy person and bring smile to his face” suggested Sandeep Marwah President of Marwah Studios and chair Person of large number of social, cultural, spiritual and media organizations.

“We are thankful to the members of film and television fraternity who all are always ready to share their experience with the young film makers from the platform of AAFT ” thanked Sandeep Marwah President of Marwah Studios.

Later a music album- “Gupt” was released by Sandeep Marwah produced by Tips, directed by DJ Sheizwood and performed by Kashish Khan in the presence of large young audience.

Sandeep Marwah honored the entire guest including Sonu Thukral with the life membership of International Film And Television Club of AAFT.

“An excellent collection with different formats including crayons, oil colors, pencil sketches etc. Sabya Sachi Ghosh is a versatile painter of this age, inaugurating his solo exhibition has given me more strength to work for arts” said Sandeep Marwah President of Marwah Studios while lighting the inaugural lamp.

Sabya Sachi Ghosh is a well-known artist from Kolkata running studios at Agra. Sabya opted this profession as it fulfills his desire to understand the confusing world around. “ Creating arts give my life a complete meaning,” said Sabya Sachi Ghosh, a bachelor in education and masters in English.

An exhibition titled ‘A World Of My Own’ at the Visual Art Gallery at India Habitat Centre was well attended by large number of art lovers and critics. It explores multiple facets of the human experience as an individual isolated from perceived as one with society. The solo show is a study of artist’s perception that transcends time and leaps into the infinite.

The presence of world-renowned film personality Sandeep Marwah was well marked when he was honored at the 4th Annual Gyan Shree Award function followed by a poetry session organized by Savitri Vikas Samiti at Hindi Bhawan at New Delhi.

“ Sandeep Marwah is an artist himself and his involvement in the promotion of art and culture in India is worth praising” said Dr. Anita Srivastava President SVS handing over the memento to Marwah in the presence of large audience.

Talking to the young film makers at AAFT, Sandeep Marwah added that Youth with mental health conditions can often experience stigma and discrimination, which in turn can lead to exclusion and/or discourage people from seeking help for fear of being negatively ‘labelled’.

The 2014 observance of International Youth Day will raise awareness on this important topic, as well as highlight the experiences of brave, young individuals who have chosen to speak out about these issues with the objective of overcoming stigma and discrimination to ensure that young people with mental health conditions can lead full and healthy lives free from isolation and unnecessary shame, and openly seek the services and support they need.

Goa 24th August 2014: Goa has a large number of tourist, it can be doubled if more emphasis is given to film and education tourism in the state” said Sandeep Marwah Managing Director of NFTC– National Federation of Tourism And Transport Cooperatives of India Limited during his stay at Hotel Marriott at Miramar, Panaji, Goa.

Goa is India’s smallest state by area and the fourth smallest by population. It is also India’s richest state with a GDP per capita two and a half times that of the country as a whole. It was ranked the best-placed state by the Eleventh Finance Commission for its infrastructure and ranked on top for the best quality of life in India.

Tourism is Goa’s primary industry: it handles 12%[25] of all foreign tourist arrivals in India. Goa has two main tourist seasons: winter and summer. In the wintertime, tourists from abroad mainly Europe come to Goa to enjoy the climate. In the summer time, which, in Goa, is the rainy season, tourists from across India come to spend the holidays.

“Indo Egypt relations have seen a strong wave and a magnificent results during the tenure of H.E. Khaled El Bakly the Ambassador of Arab Republic of Egypt in India in last few years” said Dr. Bhisham Narayan Singh the former Union Minister and Governor of Tamil Nadu at the farewell party at Islamic Cultural Centre at New Delhi.

“We have left no stone unturned to develop and promote the associations and interactions between two countries India and Egypt under the guidance and leadership of H.E. Khaled El Bakly” said Sandeep Marwah President of Marwah Studios and Chairperson of Indo Egypt Cultural Association formed by the Embassy of Republic of Egypt in India.

“The love and affection which I am carrying from India will bring me back to India may be in different capacity. Indo Egypt relations are for ever.My term as Ambassador in India is full of amazing memories. I love India and have now solid relations with Indian” expressed Khaled El Bakly with full of emotions.

The meeting was attended by large number of dignitaries from all strata of life.

“It is very interesting to listen to British people when they speak Hindi language. It touches heart directly and is a very convincing language” said Sandeep Marwah President of Marwah Studios talking to a group of people from England learning Hindi at UK at Noida Film City.

The students were given an opportunity to be on marwahstudios.tv and radionoida.fm to express themselves and their visit to India. The group also visited Asian Business School, the associate institute of Oxford Business College.

Speaking on the occasion the President of Godfrey Phillips India Limited K.K.Modi expressed his gratitude to the American Corporation who had helped him establishing his initial business especially a manufacturing unit producing nylon.

“It was an excellent mix of business and personal networking opportunity for the members of IACC. Some wonderful ideas were generated during this get together” said Sandeep Marwah Chairperson of Media & Entertainment Committee of IACC. Later Dr.Lalit Bhasin President IACC paid vote of thanks to each and every one present there and contributed towards the success of the nite. 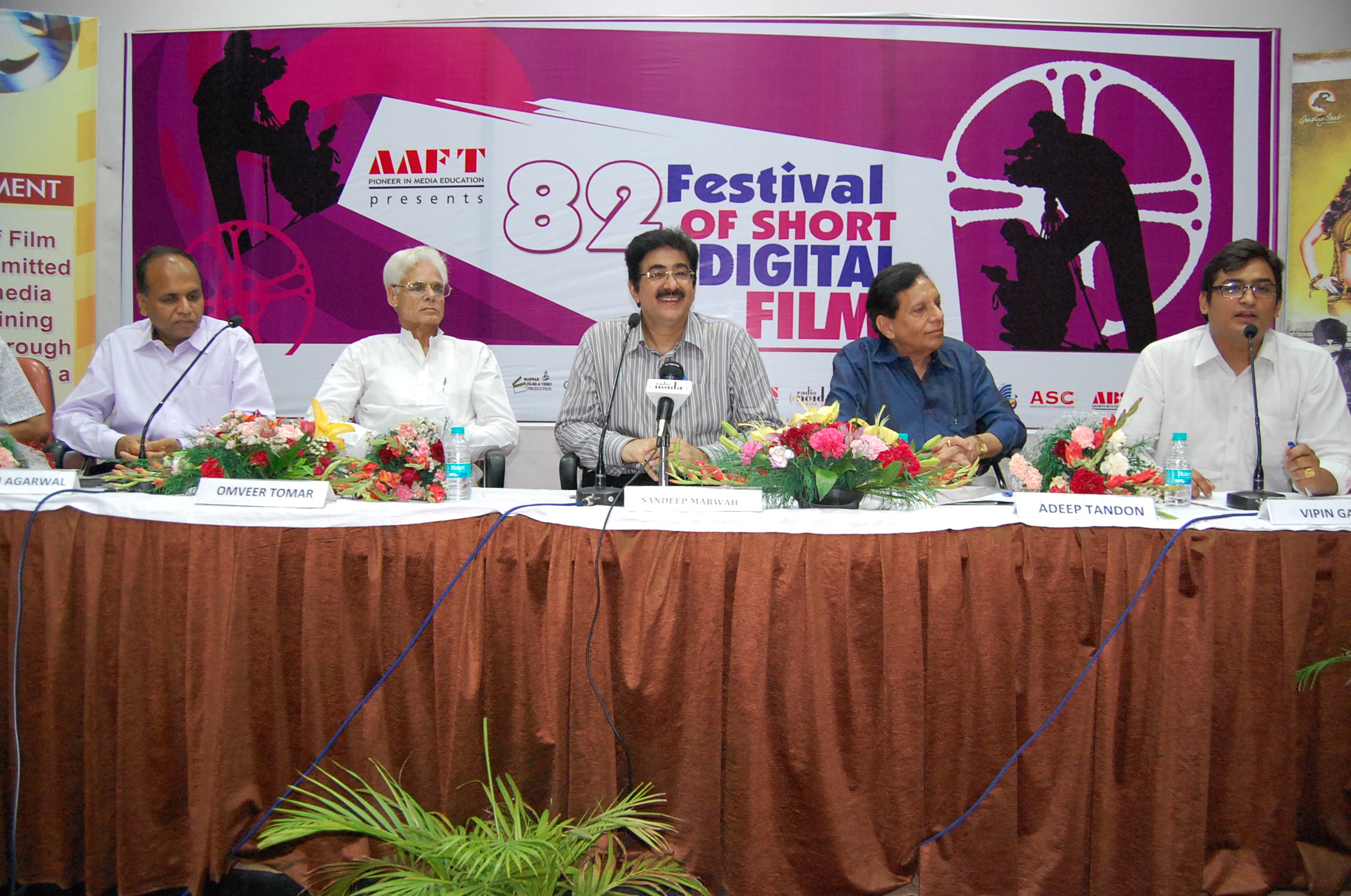