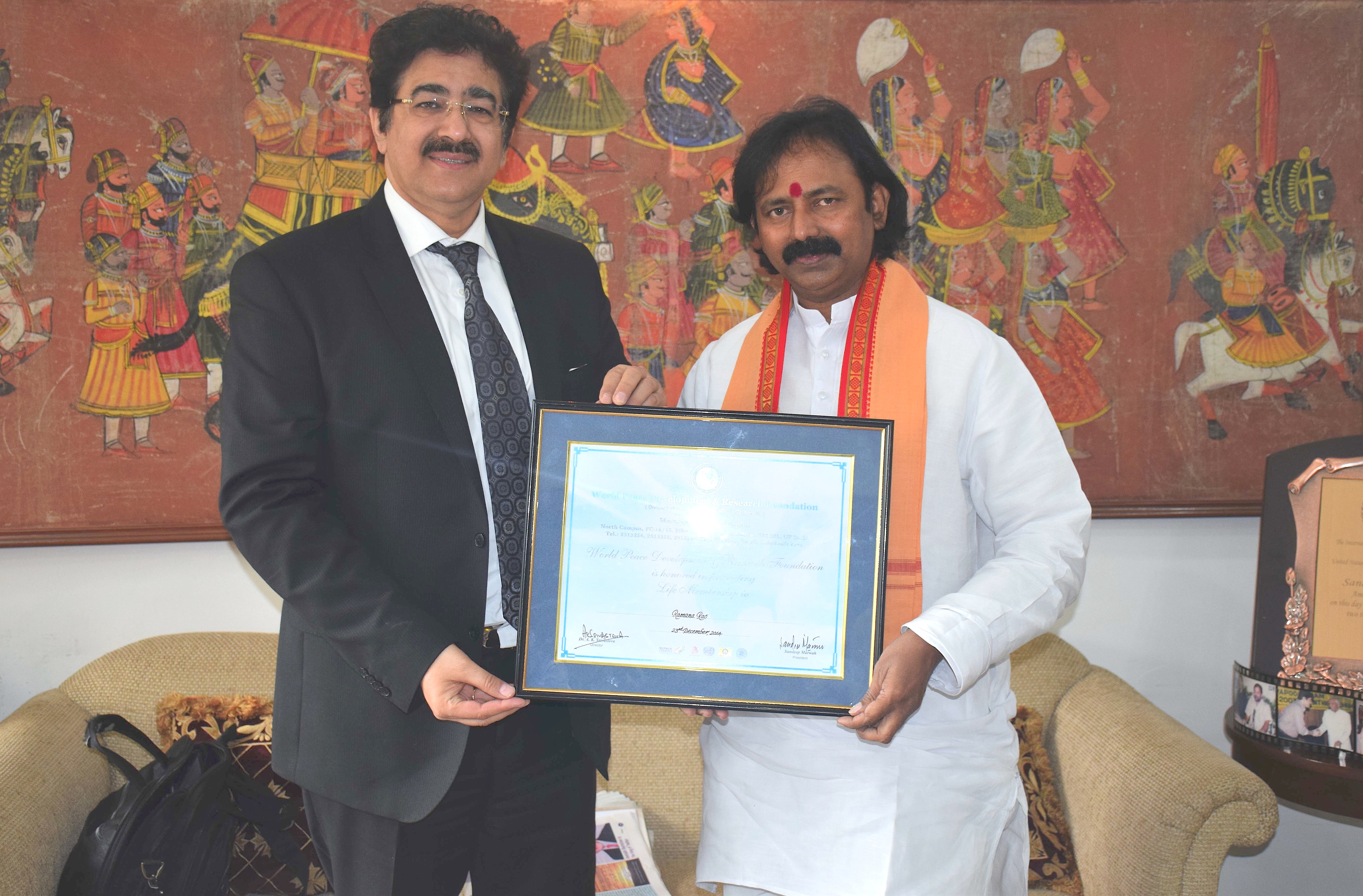 “World Peace Development And Research Foundation has created a wonderful ‘niche for itself. More than 100 countries are appreciating our gesture of bringing awareness towards humanity,” said Sandeep Marwah President of WPDRF ar Marwah Studio.

“We have also involved the religious and spiritual leaders and masters of numerology, palmistry, astrology in propagating that Humanity is the biggest religion of the World” added Marwah presenting life membership of WPDRF to renowned master Ramana Rao from Andhra Pradesh.

“I am pleased to be part of WPDRF now. My efforts now will go into propagating Sandeep Marwan’s vision and mission” expressed Ramana Rao.

Ramana Rao is a renowned Astrologer and Foreteller, a Pioneer and specialist in powering fate through Reading Face, Palm, Numerology and Vaastu and practices are also part of his extensive repertoire. He is an expert in astrological chart interpretation; he has been professionally practicing for more than 2 decades. His strength is in predicting the astro chart using conventional and Unconventional interpreting techniques.

“We are here to bring in love, Peace and Unity through this International Chamber of Media And Entertainment. We have always believed that the responsibility of media persons is more than an ordinary citizen of the country” said Sandeep Marwah President of ICMEI at an international conference at Marwah Studios to bring new synergy between few countries.

“Indian Cinema has not seen bigger superstar than Rajesh Khanna. His phenomenon following will keep him alive for centuries together” said Sandeep Marwah congratulating Yaseer Usman writer of a book RAJESH KHANNA on its release during Delhi International Film Festival at NDMC Convention Centre, New Delhi.

“We have planned especially the book release of a film personality to coincide with the film festival “ said Ram Kishore Parcha President of the festival.

“The book has covered all the pluses and the minuses of Rajesh Khanna” said Ashok Tyagi Secretary General of ICMEI and the director of feature film RIYASAT, last film of Rajesh Khanna.

“I have researched a lot before writing the book, the works of Rajesh Khanna are more than just one book. I have tried to give my best in it interestingly” expressed Usman. The event was attended by a large gathering at the festival.

“Writing is not only a very important part of filmmaking but our day to day affairs. Very few people can take up the assignment of converting their expression into the shape of book” said Sandeep Marwah President of Marwah Studios while releasing the book of Sanjay Sinha.

The event of book release took place at NDMC convention Cenre at New Delhi during the 3rd Delhi International Film Festival. “I congratulate the writer for transforming his thoughts into words and then a book” added Marwah.

“I am thoroughly excited that my book got space in the festival which has enhanced my motivation to start the new book” said Sanjay Sinha also the Editor Aaj Tak thanking the organizers.

“We still have to learn to make powerful and entertaining films. Bangladesh is crazy about Indian Cinema. I can initiate the talks between two countries” said Adam Dawla an award winning film maker from Bangladesh during his meeting at the International Chamber of Media And Entertainment Industry at Noida Film City.

Ashok Tyagi Secretary General will take care of the modalities to open office in Bangladesh and ICMEI will accept the offer of participation of Adam Dawla voluntary. Later Sandeep Marwah handed life membership of International Film And Television Club to Adam Dawla.

The first of its kind in the World, 3rd edition of global Festival of Journalism Noida 2015 has been fixed for three days from 12th to 14th February 2015 informed Sandeep Marwah President of the Festival.

International Journalism Centre, a body of journalists, is going to present the festival keeping in mind the high standards of last two festivals conducted here in Noida earlier.

International Journalism Centre under the leadership of Sandeep Marwah also declared in previous years 12th February as the International Day of Journalism which has been followed by thousands of journalists and journalistic organizations all over the World.

“A very unique concept of celebrating journalism through festival designed three years back has started taking a powerful shape in this country. I hope that very soon it is going to be an international brand” said Sandeep Marwah declaring the final dates to the media World.

Sandeep Marwah President of Marwah Studios has been honored with an award “YAAD NA JAYEE” for his being a pillar to all those new comers who are looking for an opportunity in fine arts especially in music. Radio Noida and marwahstudios.tv are just the tip of the iceberg.

“I am obelized to R–Vision and Ravindra Singh for honoring me. It has added more responsibility on my shoulders. We have launched International Chamber of Media And Entertainment to promote everything and anything in entertainment industry” thanked Sandeep Marwah.

“Covering around 27 percent of the earth’s land surface, mountains play a critical role in moving the world towards sustainable economic growth. They not only provide sustenance and wellbeing to 720 million mountain people around the world, but indirectly benefit billions more living downstream” said Sandeep Marwah Managing Director of National Federation of Tourism And Transport Cooperatives of India Ltd. and Ambassador of IHRO affiliated to United Nation in a meeting at Marwah Studios to celebrate International Mountain Day.

“In particular, mountains provide freshwater, energy and food – resources that will be increasingly scarce in coming decades. However, mountains also have a high incidence of poverty and are extremely vulnerable to climate change, deforestation, land degradation and natural disasters” added Marwah.

Sandeep Marwah informed media persons that the challenge is to identify new and sustainable opportunities that can bring benefits to both highland and lowland communities and help to eradicate poverty without contributing to the degradation of fragile mountain ecosystems.

“Delhi International Film Festival is honored in presenting this special award to Sandeep Marwah for bringing AAFT to an international level and ranking as the best film school of Asia now attracting students from 100 countries of the World “ citation read by officer of DIFF.

“Sandeep Marwah is pride of India. His contribution in developing North India as centre of film business can never be forgotten. His vision for World cinema is worth praising” added Ram Kishore Parcha the President of the festival.

“Film Festivals are the best way to promote the films. I am happy that Delhi International Film Festival has picked up with its 3rd edition,” said Sandeep Marwah President of Marwah Studio inaugurating festival at NDMC Convention Centre at New Delhi.

Chief Guest of the occasion Delhi BJP President Satish Upadhaya said,” you do not need language to understand the cinema. The language of cinema is emotion” who later handed over Lifetime achievement award to veteran filmmaker Subhash Ghai.

“Delhi has attracted many film makers from India and abroad. Delhi has given some of the finest locations to Indian cinema and many film personalities to Indian Cinema” expressed Jalaj Srivastava who handed over special festival award to Sandeep Marwah for his untiring contribution to cinema.

The festival will be showcasing 250 films from 45 countries in next eight days on different theaters informed Ram Kishore Parcha President of the festival.