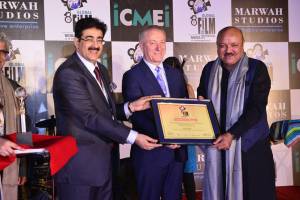 Noida: “It is a wonderful evening where Arun Bakhshi is going to perform all the hit numbers he has provided to Indian films. His presence has brought new color to the show” said Sandeep Marwah President Marwah Studio at the evening of first day of Global Film Festival Noida.

“I am honored to present the prestigious Global Cinema Award to the great singer who has created a wonderful place for himself in the industry” added H.E. Jožef Drofenik Ambassador of Slovenia to India.

Arun Bakshi is an Indian film and television actor and also a singer. He has acted as a character actor in over 100 Hindi films and as a playback singer has also sung 298 songs. He has also worked in Punjabi and Bhojpuri cinema and currently playing the role of Mahant Dashrath Tripathi in Colors’s Ishq Ka Rang Safed 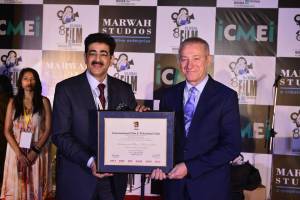 Noida: We have been dealing with country of Slovenia from a long time. The last Ambassador has been also been the guest of honor at our 7th Global Film Festival Noida. The tradition is on and will remain like this, “said Sandeep Marwah President Marwah Studio and recently nominated as World Cultural Minister by more than 100 countries of the World.

The Ambassador of Slovenia H.E. Jožef Drofenik extended his thanks to 8th Global Film Festival for joining hands with country of Slovenia. He also declared to start an Indo Slovenian Film And Cultural Forum with International Chamber of Media And Entertainment Industry. 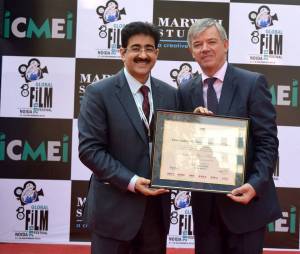 Noida: We are keen in developing and promoting our relationship with Czech Republic in a big way. The best and the easiest way is through art and culture. It brings immediately the people of two countries close to each other said H.E. Milan Hovara Ambassador of Czech Republic to India.

It is our honour to present the life membership of International Film And Television Club of Asian Academy of Film And Television to H.E. Milan Hovara the Ambassador of Czech Republic to India today at Global Film Festival Noida said Sandeep Marwah President Marwah Studio.

The Czech film “I Served the King of England” written and directed by Jiri Menzel and based on the novel written by Bohumil Hrabal was screened after the inauguration of the festival. 4 CZECH LIONS have awarded the film as the best Czech film. In 2009 it received the GOPO AWARD for Best European Film 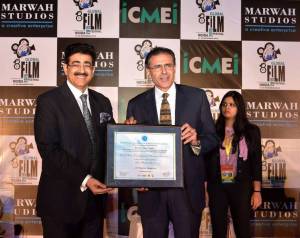 Noida: It is our international headquarters of film, television and media activities. We have always believed in bringing love, peace and unity through art and culture. The purpose of Global Film Festival is also bring large number of countries under one roof to develop love relationship between them expressed Sandeep Marwah President of Marwah Studio and recently been declared as the World Cultural Minister.

We are proud to present the life membership of World Peace Development And Research Foundation of Asian Academy of Film And Television to H.E. Demetrious A. Theophylactou the High Commissioner of Cyprus to India added Marwah.

H.E. Demetrious A. High Commissioner was trained in University of Oxford, Harvard University and Washington State University, and possesses a B.A. and M.A. degrees in Communication, and a Ph.D. in International Relations, Comparative Politics and Political Economy.

Mr Theophylactou started his career as an Editor in 1982, and worked for both Cyprus and international media until 1990, including the Cyprus Broadcasting Corporation and CNN. He joined the Diplomatic Service of Cyprus as the Press Counsellor at the Permanent Mission of Cyprus to the United Nations in New York from 1994 to 2001. 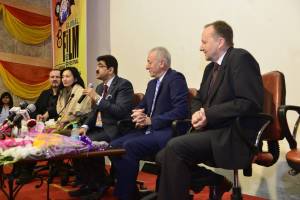 Noida: “Slovenian film industry may not be very big industry but we have still produced some of the finest films. One of them today is the part of this festival,” said Boris Jelovsek Minister Plenipotentiary, Embassy of the Republic of Slovenia in India speaking to the large audience at 8th Global Film Festival Noida 2015 at Marwah Studio.

“The films are the best ambassadors of culture and festivals are the best way to showcase them. Slovenian film ‘Shanghai Zipsy’ will do the needful in this festival. More people will get associated with our nation. We will soon announce the formation of Indo Slovenian Cultural Association,” said H.E. Jožef Drofenik Ambassador of Slovenia to India.

“With the coming of H.E. Jozef Drofenik one more country is now associated with 8th Global Film Festival Noida. We would love to be part of the Slovenian association,” said Sandeep Marwah President of Marwah Studio.

Noida: “We are in a position to retain our World Record of touching 88th Edition of film festival.,” said Sandeep Marwah President Marwah Studio on the first day of 8th Global Film Festival Noida 2015.

AAFT is the only festival in the World to touch 88th Edition. Only festival which happens four times a year, 2300 young directors have been given opportunity to showcase their debut film. The directors, cast and crew are from 108 countries of the World.

“We started the festival 23 years back with a small group of people, today festival is known to the whole world. Many times we have been appreciated at the international stage. We hope to reach soon to make centurion” thanked Dean, Asian Academy of Film And Television.

Delegates of 8th Global Film Festival Noida attended the festival from different states and countries of the World. 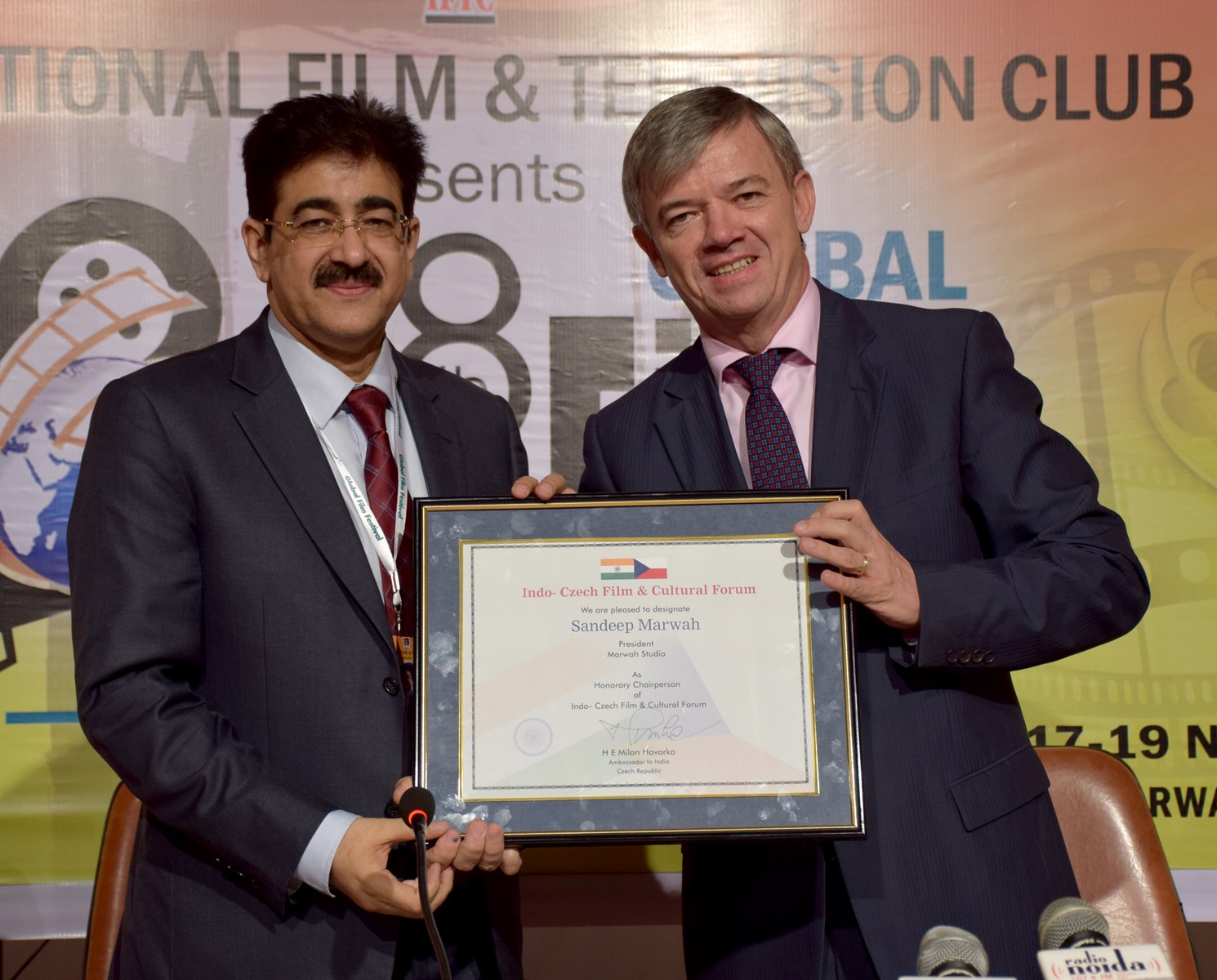 Noida: “No one can be better than the World Cultural Minister and a World Peace Ambassador Sandeep Marwah to represent the Chairmanship of Indo Czech Republic Film And Cultural Forum to promote and develop the relationship between two countries through art and culture” said H.E. Milan Hovorka Ambassador of the Czech Republic to India.

Sandeep Marwah is five times World Record Holder and recipient of more than 300 awards from all over the World for his untiring contribution to the field of Cinema, art and culture. President of Marwah Studio Sandeep Marwah has created a family of 15000 media professionals who all are helping him in attaining love, Peace and Unity in the World through art and culture.

“I am happy that Sandeep Marwah is an another Gandhian who has spread the ideology of Gandhi and created a wonderful niche for himself. His vision of spreading love, peace and unity through art and culture will make him a World leader one day” said Tara Gandhi Bhattacharya the grand daughter of late Mahatma Gandhi, Father of The Nation.

“I am much thankful to H.E. Milan Hovorka Ambassador of the Czech Republic to India for considering me for this responsibility. I will leave no stone unturned to make it a popular organization in the World,” said Sandeep Marwah President of Marwah Studio.

Summana Mukerjee filmmaker, Suresh Sharma Chairman NFTC, Roman Masarik Deputy Head of the Mission were also present on the historical event of 8th Global Film Festival Noida 2015.The event was attended by the delegates from more than 35 countries of the World.

Noida: “Indian-Czech Film And Cultural Forum will work as a dynamic institutional link for the promotion of art and cultural relations between India and Czech Republic. The forum will constantly strive to identify new areas of mutual co-operation and ensure the smooth flow of trade, investment joint ventures and technology. The forum is dedicated to the cause of expanding Indian-Czech friendship, goodwill & business relations,” said H.E. Milan Hovorka Ambassador of the Czech Republic to India.

Present on the occasion Subhash Goel President of Indian Association of Tour Operators congratulated the Ambassador for creating an exclusive body for the promotion of art and culture. Suresh Sharma Chairman NFTC- National Federation of Tourism And Transport Cooperatives of India Limited and filmmaker Summana Mukerjee from Kolkata also spoke on the Indo Czech relationship.

I congratulate H.E. Milan Hovorka for his appropriate action to launch ICFCF and appreciate for bestowing upon the responsibility to Sandeep Marwah, the most capable person in the country” said Tara Gandhi Bhattacharya the grand daughter of late Mahatma Gandhi, the Father of Nation.

“It is a auspicious day and Indo Czech Republic Forum is launched today in the presence of large film makers and audience related to cultural activities, I am sure the result is bound to be big soon” said Sandeep Marwah President of 8th GFFN.

Deputy head of the mission and Councilor Roman Masarik thanked everyone for their gracious presence and said that we will support the forum to our best so that both the countries can grow in their relationships. 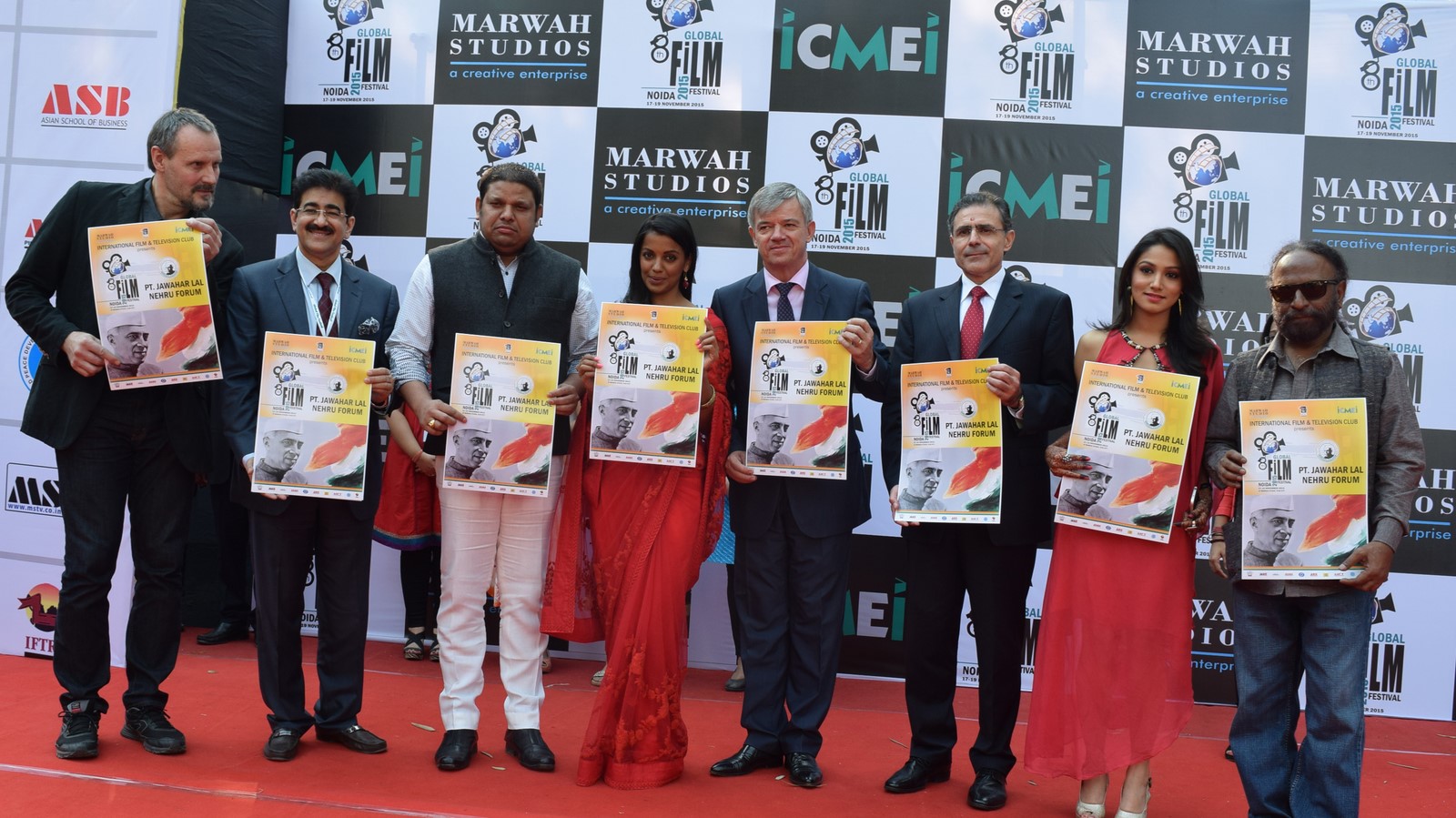 Noida: “We have been celebrating Children’s Day with great pomp and show and it falls on the birth anniversary of late Prime Minister Pt. Jawaharlal Nehru. With the presence of more than 2000 school children and 1800 young film professional we are again remembering the great leader of India who was also part of the independence struggle” said Sandeep Marwah introducing Pt. Jawaharlal Nehru Forum to all the dignities.

The event took place on the first day of 8th Global Film Festival Noida 2015 at Marwah Studio, Noida Film City. The festival has planned 54 events in three days and participation of more than 35 countries of the World. 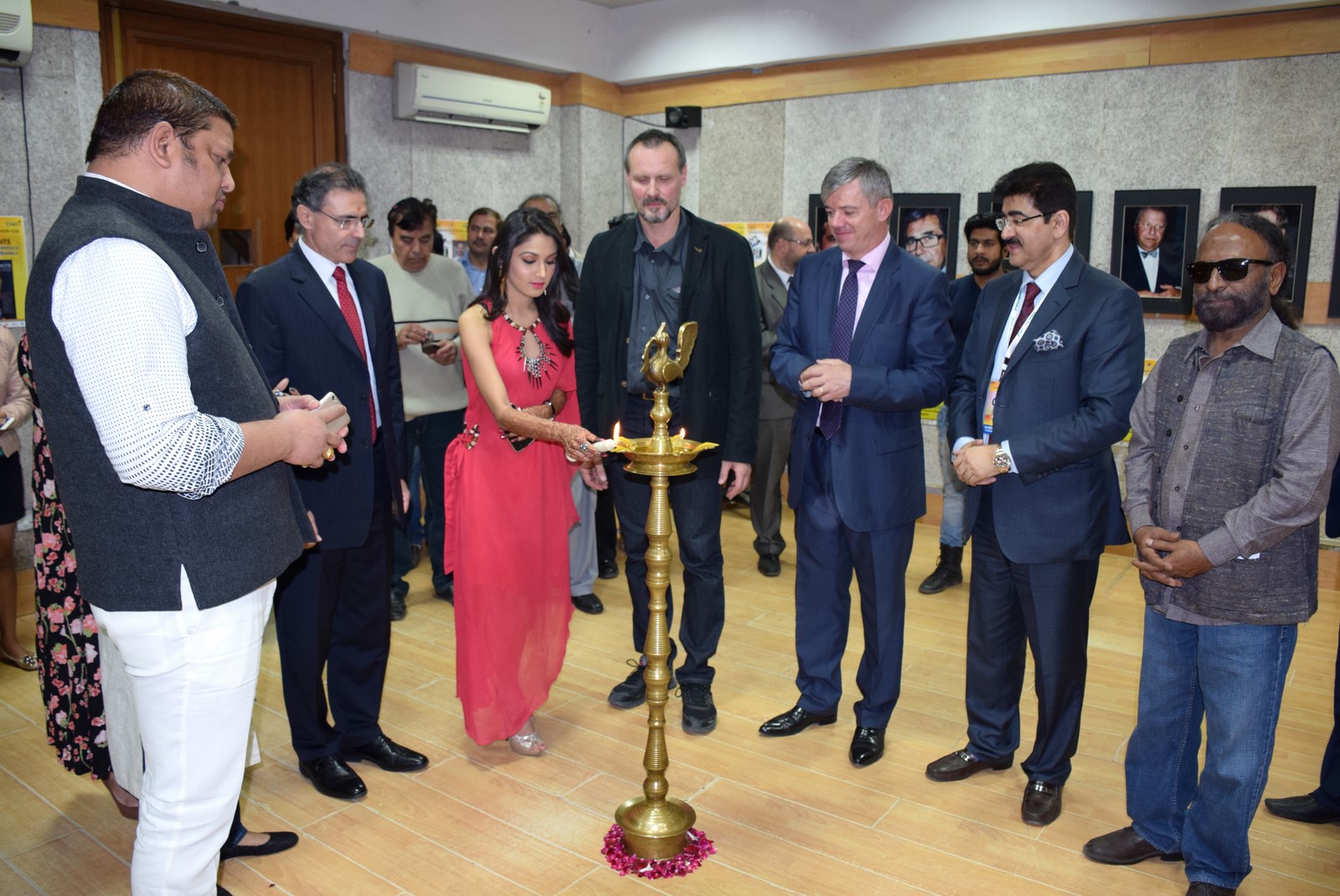 Noida: “Never seen so much of depth in the photographs, the portraits of top personalities of the World. This is the quality work and many photography lovers will learn from Henryk” said Ketan Mehta renowned film director inaugurating the exhibition of portraits by Polish Photographer at 8th Global Film Festival Noida 2015.

“We must congratulate you for your superior works which you have presented here. They are real piece of art” said H.E. Milan Hovorka Ambassador of Czech Republic to India.

“Global Film Festival is the right platform to exhibit these kind of photographs. The artist will get his share of appreciation from the international audience” added H.E. Demetrios A. Theophylactou High Commissioner Cyprus High Commission in India.