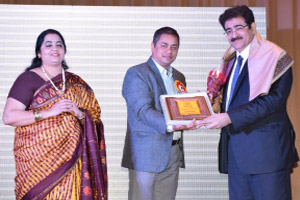 New Delhi: “We are proud to have with us the recently nominated Global Cultural Minister of International Chamber of Media And Entertainment Industry Sandeep Marwah who has five World Record to his credit. Founder of Noida film city, Marwah is also the founder of Asian Academy of Film And Television”, citation read by Someshwar Sharma President of Sparsh cultural group.

The award was presented to Sandeep Marwah in a jam-packed house at Sai International Auditorium at New Delhi. Later Sandeep Marwah presented awards to few known and upcoming artist from the field from music, dance and event management.

“The Indian Cinema is the most popular cinema in the World. Music and songs from Hindi film industry has impressed people from all over the World” Marwah also shared his experiences of his visits to different countries of the World.

Noida: The visit of H.E. Krishna Prasad Dhakal Deputy Chief of Nepal to India to Noida Film City was a fruitful exercise, as he was not only impressed by the arrangements but by the concept of International Chamber of Media And Entertainment Industry that is Love, Peace and Unity through Art and Culture.

“We have designed 11 point program with Nepal and would love to promote our relations through art and culture” said Sandeep Marwah President of ICMEI and now nominated Global Cultural Minister.

“We can even proceed further to open Indo Nepal Film And Cultural Forum to promote more activities for time to come. It will be a permanent platform for both the countries,” added Marwah.

“We are keen in inviting Sandeep Marwah to Nepal to discuss and plan of film shootings in Nepal. We are also ready to organize film festival of Nepali films at New Delhi” expressed H.E. Krishna Prasad Dhakal the Deputy Chief of Nepal to India. 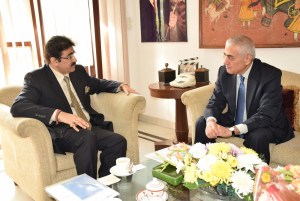 Noida: “We will work towards the promotion of cinema, art and culture together. India and Azerbaijan will develop its friendship through films and media,” said H.E. Ibrahim Hajiyev Ambassador of Azerbaijan to India on his visit to the international Headquarters of International Chamber of Media And Entertainment Industry at Noida Film City.

ICMEI is going to provide scholarship to the deserving student from Azerbaijan for a short-term course. Marwah Studio is ready for joint production of short film. The first step will be the formation of Indo Azerbaijan Film And Cultural Forum and a festival of Films from Azerbaijan can be organized in short period of time” said Sandeep Marwah President of the Chamber who has recently been nominated as the Global Cultural Minister during Global Media Summit.

The meeting lasted for an hour where the secretary General Ashok Tyagi prepared the minutes. The radio head Sushil Bharti was also present in the meeting. 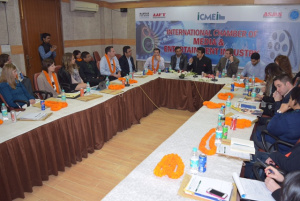 The education includes the case study of Sandeep Marwah from stage artist to founder of Noida Film City where more than 350 channels are being broadcast to 162 countries of the World and how 30,000 employment has been generated from here for media and entertainment industry.

The study also includes the production of 4500 television programs, 125 feature films and producing of largest number of short films in the World. Sandeep Marwah has five World Records in media to his credit. Nothing is impossible for a willing mind,” said Sandeep Marwah.

“On behalf of International Study Program of UCLA delegation of MBA let me thank you for meeting with us and adding to our learning experience in India” said Tereza Wodenhouse Coordinator of UCLA. “We look forward for future cooperation,” added Prof. Romain Wacziarg of UCLA. 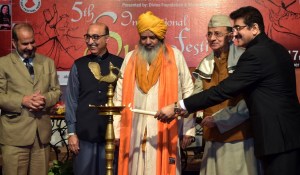 “I am impressed by the wonderful words stated by our honorable Prime Minister Narendra Modi that Islam and Hinduism can meet at Sufism. Keeping that in mind we have now promoted in a much bigger way our 5th International Sufi Festival to bring in love, peace and unity” said Sandeep Marwah President of Marwah Studio introducing festival to the large audience present there from all over India and abroad.

“We are always ready to extend our hand of friendship. No religion teaches you hate and war. Sufism is above religion. It is the devotion towards almighty” expressed H.E. Abdul Basit High Commissioner of Pakistan to India.

The graceful presence of Dewan of Khawja Ajmeer Sharief Dargah Jenab Zain ul Aabidin spoke on the oneness of all the religion towards humanity. He shared his spiritual experiences with the audience. USA envoy Ivon Boekelheide said that there is a need to strengthen bonds of love.

“Love and tolerance is the key to success. We have always believe in and respect all the religions. India is the biggest example of spirituality. Sufism teaches you humanity,” said Dr. Bhisham Narayan Singh former Governor of Tamil Nadu.

In her speech Gulshah Begum who has entirely devoted her life for Saintly devotion in her capacity as chairperson of Divine Abode said that it is some Great spiritual power at Ajmeer Sharief, which directed her to devote her entire self for serving Sufiyat, & divinity .She highlighted contribution of Hazrat Khawaja Main-ud-din Chasti (RA) in Promoting mutual love & brotherhood.

While addressing the Function Khawja Farooq Renzushah, who is author of several books said that Kashmir has remained abode of Great Sufi Awaliyas since times immemorial who inculcated sprit of love and humanity.

Later Sandeep Marwah presented the life membership of World Peace Development And Research Foundation to all the dignities present there. 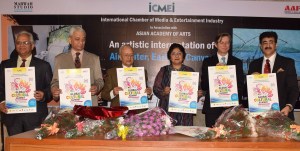 Noida: Asian Academy of Arts in association with World Peace Development And Research Foundation has planned a Global Cultural Summit in the month of December 2015.

“It is a great gesture of Sandeep Marwah and his organizations to think so deeply and sincerely towards the country’s cultural development and planned to organize huge cultural meet” said Dr. Yogendra Narain the former Secretary General of Rajya Sabha while releasing the poster of Global Cultural Summit planned for 22nd December 2015 at Marwah Studio.

“Cultural exchange is the best policy to bring two nations close to each other” said A.V. Rajan former Indian Ambassador to Nepal. “Sandeep Mawah is the first Indian to be presented with the tittle as Global Cultural Minister said Nidhi Sharma Secretary General of ICOU. 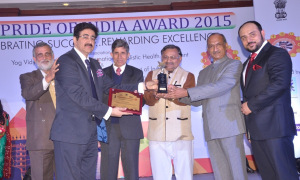 The Pride of India Award 2015 goes to Sandeep Marwah for his untiring contribution towards promoting and developing art and culture, media and entertainment and education. 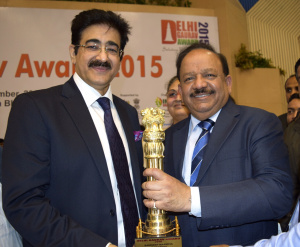 New Delhi: Sandeep Marwah has brought the laurels to India. He is the only person from the field of media and culture who has brought 40 International awards to the Nation.

There are five international records in media by Sandeep Marwah. His contribution to media and entertainment industry is marvelous. Devender Panwar read the citation in a jam-packed Vigyan Bhawan at New Delhi.

Dr. Harshvardhan Union Minister of Science And Technology presented the National Award to Sandeep Marwah for his deep involvement in the field of art and culture, media and entertainment.

“We need sincere and dedicated workers like Sandeep Marwah in India to promote this country and create a world reputation for India” said Dr. Harshvardhan honoring Marwah.

“Nothing is difficult in life if you have a strong determination to achieve. The positive attitude can bring you success,” said Sandeep Marwah while addressing to the audience at Vigyan Bhawan. 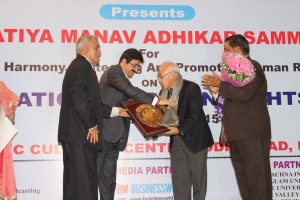 New Delhi; 10th December has been declared and celebrated by United Nation as the International Day of Human Rights. The social organization All India Council of Human Rights Liberties And Social Justice had a grand function at India Islamic Cultural Centre, New Delhi to honor some of the prominent personalities of the country who have contributed to the social cause.

Sandeep Marwah the five times World record holder in media, World Peace Ambassador and Global Cultural Minister was the guest of honor who presented the awards. The first Bhartiya Manav Adhikar Samman-2015, a national level award was for H.H. Holiness Dalai Lama which was collected by his minister representative.

“I am honored to honor H.H.Dalai Lama for his untiring contribution to the World Peace. His vision is the blessings to the whole World,” said Sandeep Marwah. All awards were dedicated to the former President of India Late A.P.J. Abdul Kalam.

More than 30 awards were presented to people from different segments of life who all have contributed immensely to the social welfare and society upliftment informed Dr. Anthony Raju the Global Chairman of the organization. 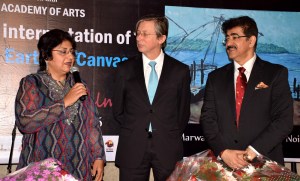 Noida: Asian Academy of Arts has been formed to promote all the fine arts including paintings, sculptures, writing, music, dance and theatre. AAA has supported large number of known and unknown painters and artist from all over the World,” said Sandeep Marwah President of Marwah Studio.

An exhibition of paintings of Kiran Mehra Kerpelman the Director of United Nation Information Centre for India and Bhutan was inaugurated here at Marwah Studio by H.E. Jan Luylk the Ambassador of Kingdom of Belgium to India along with Dr. Yogendra Narayan former Secretary General Rajya Sabha, A.V. Rajan former Indian Ambassador to Nepal and Raj Nidhi Sharma Secretary General of ICOU.

The energy and enthusiasm of ICMEI and Marwah Studio is infectious. I am thankful to ICMEI for making me part of this beautiful event” said H.E. Jan Luylk Ambassador of Kingdom of Belgium to India.

“Marwah has been rightly nominated as World Cultural Minister. He is not only promoting Indian art but whole of the World through his different platforms” said Dr. Yogendra Narain former Secretary General of Rajya Sabha.

“I am happy to announce an International award for Sandeep Marwah from Malaysia for his contribution to art and cinema” added Raj Nidhi Sharma Secretary General of ICOU.

“The dynamism of Asian Education Group and their participation in every segment of media, entertainment and art has made them an international brand” said A.V. Rajan former Indian Ambassador to Nepal.

“I am thankful to AAA for exhibiting my paintings that is also at such a high level. My paintings depict my experience in India and mt love for each and every place I visited during my tenure in India” said Kiran thanking the large audience present there.