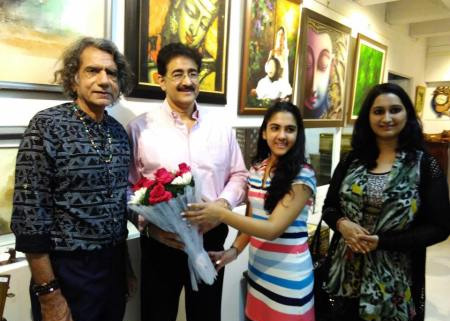 New Delhi; The art business has picked up very well in last few years in the capital of India. From finger tips to long list of pages of art galleries in Delhi speaks about the rise in the love for arts and especially paintings.

“Delhi is like a mini country with people from all states of India and nationals from all over the World, we need to have large number of places to showcase our art and culture, this is an another step in the series” said Sandeep Marwah also President of Marwah Studios and Asian Academy of Arts.

Aarti Makkar curated the first show under the title ‘Celebration of Passion of Art’ and paintings of artists from all over India showcased their works. Gallery Director R.N.Chabra also spoke on the occasion. Asian Academy of Film And Television supported the event 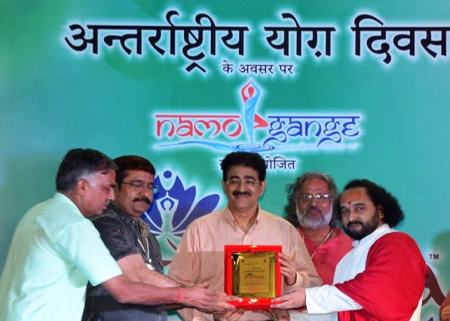 New Delhi: On the auspicious occasion of “International Yoga Day 2016“, Namo Gange Trust to fulfill its social & moral responsibility towards society, taking its first step to carry forward the great vision of Hon’ble Prime Minister Shri Narendra Modi to promote the unmatched Indian heritage represented by the ancient system of traditional therapies and remedies under the leadership of Acharya Jagdish Ji.

“As the World’s interest to the Health Care topics of ancient Indian Paramedical system is growing day by day, The Yogshala Expo 2016 is the first step to our voyage to the Healthy World. The Expo will be held for three consecutive days from June 21st to June 23rd 2016 at Hall No.7, Pragati Maidan Delhi” said Anil Mittal Patron to the organization.

“On this day we are proud to honor Sandeep Marwah –Global Cultural Minister and President of Marwah Studios who has been in promoting yoga for the last 23 years and trained and guided more than 12000 people in yoga hailing from more than 100 countries o the World. He has been patron to Global Yog Alliance too” said Nirmal Vaid the coordinator of the fair.

The award was handed over to Sandeep Marwah by head Acharya Jagdish Ji and Anil Mittal in a grand function attended by large audience from all over India. 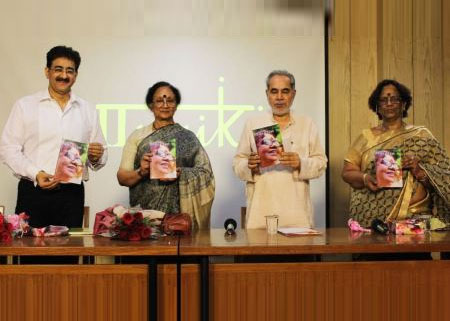 New Delhi: A colorful presentation, a judicial mix of dance, music, poetry and visuals by Sarjana in association with Aangik was presented on the release of poetry book of Dr. Rama Singh at Indira Gandhi National Centre for Arts at India Gate, New Delhi.

“We must learn how to appreciate all the arts. You can bring in love, peace and unity through art and culture. There is a beautiful coordination between all the arts. They all lead to spirituality and humanity,” said Sandeep Marwah President of Marwah Studios while releasing the book of Dr. Rama Singh titled “ Ye Geet Hain Mere Banjare”.

The Hindi Centre of Uttar Pradesh has already honored Dr. Rama Singh with Sahitya Bhushan Samman. Her earlier publications include number of poetry and story books and collection of many write-ups.

Later Sandeep Marwah was also honored for his contribution to literature in India and also for starting a grand literature festival for North India under the title Global Literary Festival Noida. 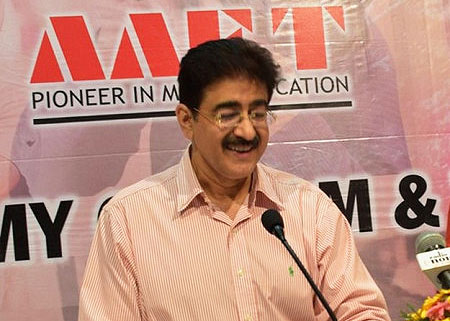 New Delhi: The President of ICMEI- International Chamber of Media And Entertainment Industry Sandeep Marwah has extended his greetings and felicitations to the people of the Republic of the Philippines on the occasion of their Independence Day (June 12, 2016).

India and the Philippines share warm and friendly relations. I am pleased to note the strengthening of our cooperation, both bilaterally and in multilateral fora. I am confident that the close ties of friendship and understanding between our two peoples will be further strengthened in the years to come.

I take this opportunity to convey to Your Excellency my best wishes for your good health and well-being, and for the progress and prosperity of the friendly people of the Republic of the Philippines”. 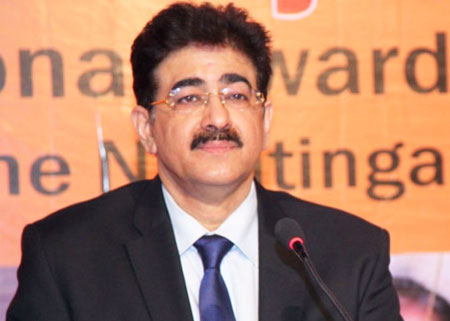 New Delhi: The President of ICMEI- International Chamber of Media And Entertainment Industry Sandeep Marwah extended heartiest greetings to the H.E. Waven Winslow Williams Seychelles High Commissioners to India on the occasion of National Day of Republic of Seychelles falls on 18th June.

India and Seychelles have broad based relations that cover a host of sectors including defense, culture, trade and technical cooperation. Hinduism in the Seychelles is the second largest religion after Christianity, with more than 2.4% of the population.

According to the Ministry of External Affairs of the Government of India relations between India and Seychelles have been characterized by “close friendship, understanding and cooperation while Seychelles has described itself a ” rock of dependability for India in the Indian Ocean regions. 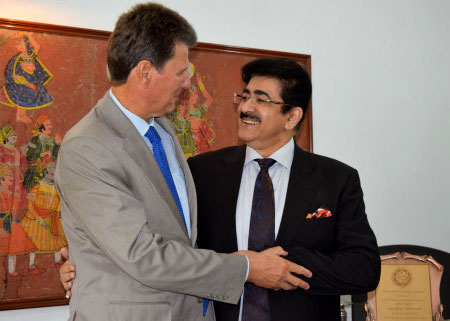 New Delhi: The President of ICMEI- International Chamber of Media And Entertainment Industry Sandeep Marwah extended his heartiest greetings to H.E. Thorir Ibsen Ambassador of Iceland to India on the National Day of Iceland celebrated on 17th June.

Sandeep Marwah said the relations between India and Iceland had “strengthened by the exchange of visits and fruitful dialogue between our two countries, most recently the visit of the Foreign Minister of Iceland to India in early-April.

“The visit of H.E. Thorir Ibsen Ambassador of Iceland to India to the international head quarters of ICMEI, Festival of films from Iceland at ICMEI are some of the gestures which have added to our strong bonding with Iceland,” said Sandeep Marwah. 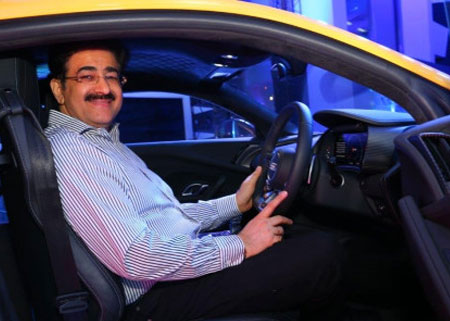 New Delhi: A renowned media person and alumnus of Shaheed Bhagat Singh College of Delhi University Sandeep Marwah has been invited by the SBSC authorities to join the organizing committee of Golden Jubilee Celebration of the institution this year.

Sandeep Marwah the founder of Noida Film City, president of renowned Marwah Studios and Asian Education Group is five times world Record Holder and recipient of more than 300 awards from all over the World.

“I am honored to be back in the council. We will have ample events and functions through out this 50th year of Shaheed Bhagat Singh College. It will be a year of celebrations,” said Sandeep Marwah accepting the offer. 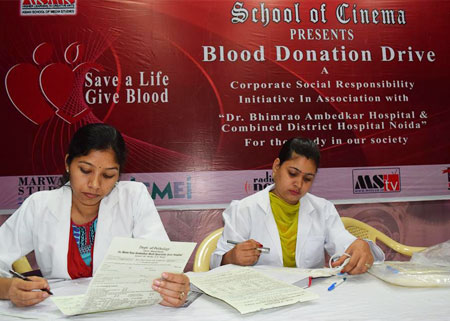 Noida: “Voluntary, unpaid blood donations must be increased rapidly in more than half the world’s countries in order to ensure a reliable supply of safe blood for patients whose lives depend on it,” Dr. Ajay Kumar Director Mass Communication and Journalism read the statement issued by WHO at Asian School of Media Studies on World Blood Donor Day during the blood donation camp.

“This year, the theme of World Blood Donor Day is “Blood connects us all”, highlighting the common bond that all people share in their blood. The slogan, “Share life, give blood”, draws attention to the role that voluntary donation systems play in encouraging people to care for one another and promoting community cohesion” said Sandeep Marwah President Marwah Studios.

“Although we have many external differences, the same vital blood pumps through all our veins. Voluntary, unpaid blood donation is the act of giving life – the greatest gift any person can give or receive,” added Marwah.

“Voluntary blood donors come from all walks of life but they have one thing in common: they put others before themselves — people they don’t even know. “Each time they donate blood, they commit an act of selfless heroism.,” said Dr. Alok Satsangi Director Department of Cinema at ASMS. More than 100 students donated blood during the session. 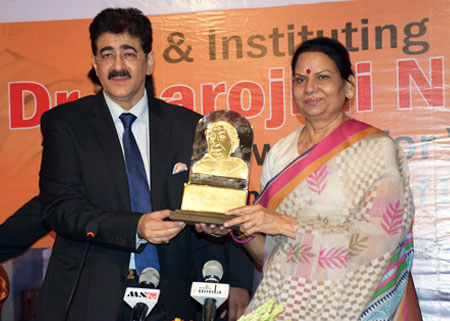 A Committee of 52 working women from different strata of life from all over India were rolled in today to work on this national event including nominating awardees for the final day to be held at Vigyan Bhawan in few weeks time.

“ What a great initiative by Sandeep Marwah who has always been pioneer and innovative in his works. It is my privilege and honor to be part of this great national event to launch an award after the name of great leader of our country Dr. Sarojni Naidu” said Vimla Batham MLA Noida, UP Vidhan Sabha.

“Dr Sarojni Naidu has been rated as ‘Nightingale of India’. She was the first woman to become the Governor of Indian State. She awakened the women of India, brought them out of the kitchen. She traveled from state to state, city after city and asked for the rights of the women. She re-established self esteem within the women of India. Her journey to success is a source of inspiration for every one,” said Sandeep Marwah President Marwah Studios and ICMEI.

International Women’s Film Forum has been created by Sandeep Marwah to promote women of all segments of life and give them a political, social and economical equality and stability in the World. 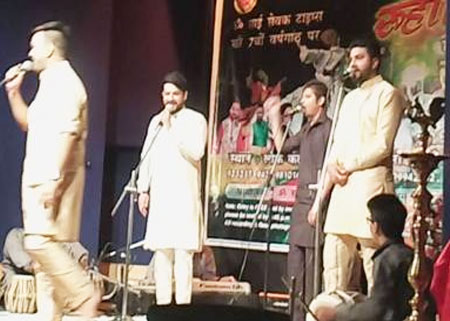 New Delhi: “Every artist needs more and more exposure to get fame and being popular in the city and then in the whole country. Radio Noida has started national program to promote young enthusiastic artists, come and join us in this talent hunt” said Sandeep Marwah talking to the large audience at Lok Kala Manch in a program titled Ruhaniyat-Ek Sufi Sham to celebrate the 7th anniversary of Sai Sewak at New Delhi.

Various artists from Delhi and outside performed on the stage of their specialization to make the evening very entertaining.

Sandeep Marwah briefed the audience about International Chamber of Media and Entertainment Industry and its activities. Marwah persuaded artists to come forward and take the full advantage of the Chamber as its purpose is to spread love, peace and unity through arts and culture.