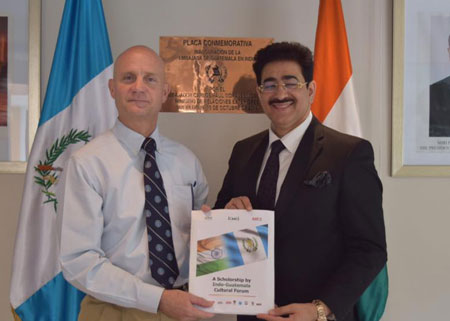 Noida: IGCF- Indo Guatemala Cultural Forum has declared a scholarship for the deserving student from Republic of Guatemala at Asian Academy of Film And Television, a premier film school of India.

“We are more than happy to declare a scholarship for the student from Republic of Guatemala to study films in India for a short term course at AAFT-Asian Academy of Film And Television and handing over the documents to the Ambassador of Guatemala to India” said Sandeep Marwah President Indo Guatemala Cultural Forum.

The first Ambassador to India created the forum to develop and promote relations between two countries India and Guatemala through art and culture, last year.

“What a pleasure to be part of this forum. I am impressed by the energy of ICMEI – International Chamber of Media And Entertainment Industry who all initiated this exercise,” said H.E. Georges de La Roche Du Ronzet Ambassador of Guatemala to India.

The scholarship presentation ceremony was also attended by Ashok Tyagi Secretary General of ICMEI and Danilo R. Marcucci Minister Counsellor & the Deputy Head of the Mission. 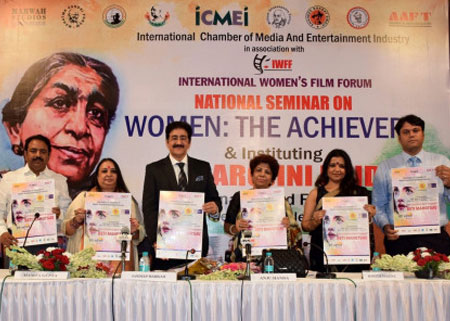 A seminar planned by IWFF on Women: The Achievers attended by large working women who all have done extra ordinary well in their respective field met at Marwah Studios to share their experience in different fields they all belong to.

The Ambassador of the Mahautsav Sandeep Marwah brought the emphasis to the national issue- Save The Girl Child- Beti Bachao Beti Padhao. Many ladies who all are associated with social organizations promised to high light the issue in a big way.

“I will be more than happy to do as much work as possible for propagating the Prime Minister’s National issue of Save The Girl Child” said Sandeep Marwah President Marwah Studios and Ambassador Beti Bachao. 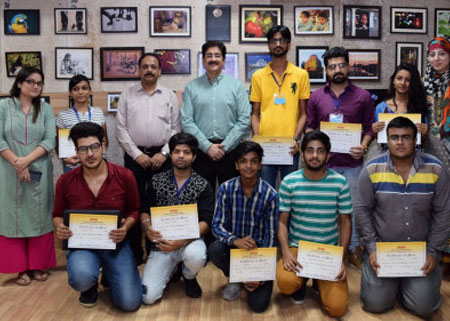 Noida: “Photographs are the ever-lasting memories. One photo is equal to 1000 words. Photography is an art of observation, It has little to do with things but everything to do with the way you see them” said Sandeep Marwah President Marwah Studios inaugurating the exhibition of still photography at Asian School of Media Studies.

“I don’t shoot what it looks but I shoot what it feels” added Marwah presenting awards and certificates to all the winners of still photography competition conducted by Asian School of Media Studies. The students submitted hundreds of photographs.

An exhibition of all the photographs has been planned by the school during 2nd Global Literary Festival from 22nd September to 24th September informed Albeena Abbas Dean School of Journalism. 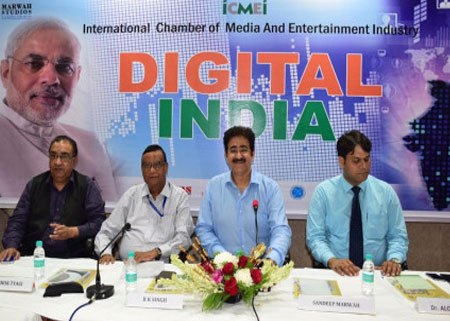 Noida: “Digital India is an umbrella program that covers multiple Government Ministries and Departments. It weaves together a large number of ideas and thoughts into a single, comprehensive vision so that each of them can be implemented as part of a larger goal,” said Sandeep Marwah President Marwah Studios while inaugurating a series of programs at Asian Education Group supported by International Chamber of Media And Entertainment Industry.

Each individual element stands on its own, but is also part of the larger picture. Digital India is to be implemented by the entire Government with overall coordination being done by the Department of Electronics and Information Technology.

“Each of these areas is a complex programs in itself and cuts across multiple Ministries and Departments,” informed Prof. R.K.Singh former Engineer In Chief Doordarshan, Ministry of Information And Broadcasting, Government of India. 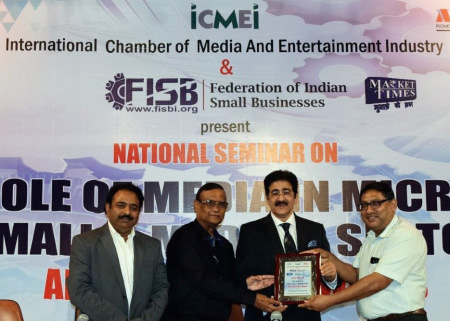 Noida: Federation of Indian Small Businesses organized a powerful national seminar on Role of Media in Micro, Small And Medium Sector at Noida Film City recently in association with Ministry of Micro Small And Medium Enterprises, Government of India.

“The federation has decided to honor Sandeep Marwah who has been an excellent manager in the media and entertainment industry. He has been a source of inspiration for lacks of people who are trying to make big in life,” said Anoop Tewari Secretary General of the Federation.

He has also created more than fifty small and creative organizations and has given employment to more than 200 people in them. He deserves much higher platform to honor for his national and international contribution added Anoop Tewari.

The President of the Federation presented the award to Sandeep Marwah. R.K.Singh former Engineer In Chief, Doordarshan, Ministry of Information And Broadcasting, Government of India, Sushil Bharti Radio Noida 107.4FM head also spoke on the occasion. The gesture was well appreciated by the large audience from all over India. 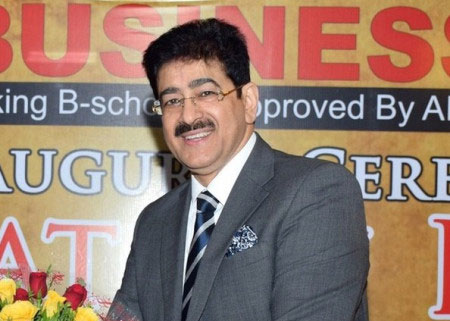 Noida: “The overall personality of the child is developed when he is involved with art and culture. Schools must take it seriously if they want their education center to be called a complete learning center.” said Sandeep Marwah President of Marwah Studios and Global Cultural Minister while addressing to the young students of Pathways School Noida on their annual award function.

“Sandeep Marwah has graced the occasion, there cannot be better person for todays event. His presence has encouraged us to march towards promotion of arts and culture,” said Dr. Shalini Advani introducing the guest.

Sandeep Marwah presented awards to all the achievers in different disciplines of subjects and co-circular activities.” I must congratulate the management of school for providing ample facilities to the children and environment to grow culturally” added Marwah. 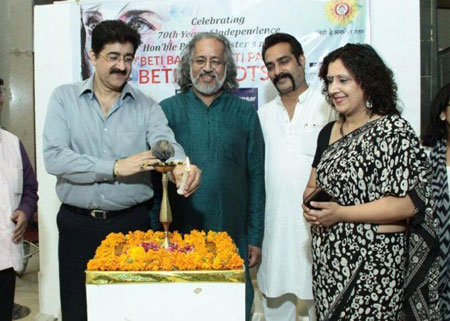 Gurugram: “The best way to pass on the message is to involve the community into the local programs. I am impressed by the activities of Nirmal Vaid of organizing art competition on the subject of Save The Girl Child-Beti Bachao Beti Padhao now at Gurugram” said Sandeep Marwah President Marwah Studios & Brand Ambassador for the Prime Minister’s Campaign Beti Bachao Beti Padhao.

More than 70 artists were provided the facilities at Gold Suck at Gurugram to complete the painting then and there on the subject of Beti Bachao Beti Padhao. The program initiated by the group last week with the grand opening by Dr Mahesh Sharma Minister for Culture and Tourism at Marwah Studios at Noida Film City.

“We are putting our best to involve as many organizations as possible into this subject which has great meaning to the Nation. We all would love to see India as fully literate state,” said Nirmal Vaid the President of the organization.

Some of the prominent artists of the area were participating under the guidance of Beenu Gupta. The Vice President of the organization paid vote of thanks. 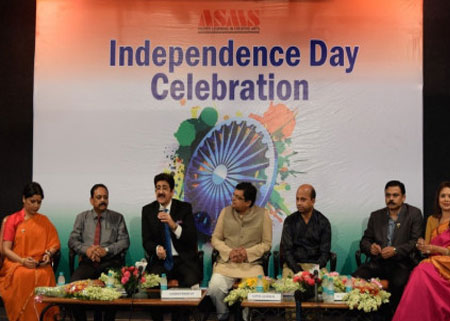 Noida: The students of Asian School of Media Studies at Marwah Studios presented a powerful entertainment program for the distinguished guests present on the occasion of 70th Independence Day of Republic of India.

“SARE JAHAN SE ACHA HINDUSTAN HAMARA” Sandeep Marwah initiated the program by introducing all the guests on the dice. “East or West India is the best. We are one sixth of the World; growth of India will be the growth of the World. Lets take an oath to bring in a wonderful change into our habits and way of life to make our country as one of the most beautiful place on Earth” said Sandeep Marwah President of Marwah Studios.

“Every single effort goes into the joint effort of the nation. Prime Minister Narendra Modi has started so many programs to add on the value to our day to day life, lets accept some of them to bring in change into our lives to make our nation the much stronger and the World leader” said Gopal Agarwal spokes person of BJP to the young audience. 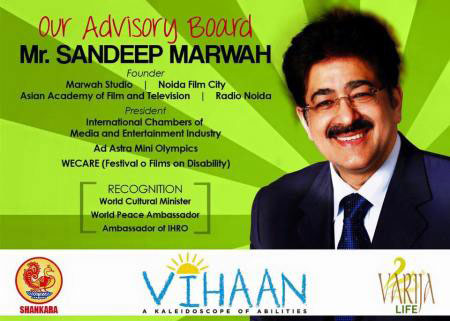 New Delhi: The subject of Special Children has always been taken on the priority basis when it comes to Marwah Studios and its social activities.

Sandeep Marwah has been the founder member with Satish Kapoor of the first film festival on Disability-We Care and has the largest collection of films on the subject. More than 12 years of involvement in screening hundreds of shows all over India to sensitize school and college students including international competitions.

“Many times films have been screened in the campus of Marwah Studios. The Festival of films on special people has already become the part of Global Film Festival Noida from last Nine years. On our recommendation Ministry of Information and Broadcasting has started screening films during IFFI festival also,” said Sandeep Marwah while accepting the advisory of Vihaan.

Sandeep Marwah is patron to a disability center Pratyan running two schools in Delhi and Dehradun. A special cell at Marwah Studios has been providing facilities to all those who are keen in making films on special people. Marwah Films and Video Production has produced many films on different subjects on disability.

United Nation has recently honored Marwah for his contribution to social upliftment including contribution to Special people. Marwah is also the part of Special Olympics and associated with large such organizations.

“We are proud to be associated with Sandeep Marwah –World Cultural Minister and a World Peace Ambassador as advisor of the mission which is now our priority” said Varija Bajaj of Vihaan an initiative of Shankara and Varija Life. 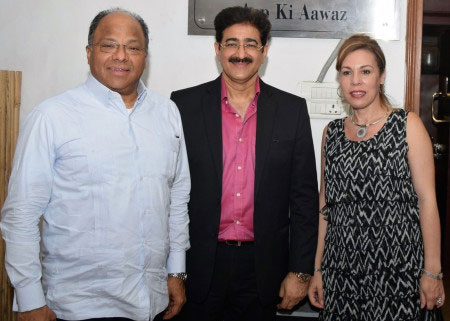 New Delhi: An interactive session with the visiting Ministers of the country was organized by the Embassy of Bolivarian Republic of Venezuela under the leadership of H.E.Augusto Montiel Ambassador of Venezuela to India at Hotel Taj Mansingh.

“We are here to create a blende between the two countries through our relations pertaining to business, social and spiritual,” said H.E. Delcy Redriguez explaining the current political situation about the country.

H.E. Augusto Montiel Venezuela Ambassador to India introduced Sandeep Marwah to the Ministers and the august audience, he said.” Sandeep Marwah is a good and committed friend of Venezuela”.

“I am representing International Chamber of Media And Entertainment Industry and we are following our Prime Minister Narendra Modi’s vision to have best of the relations with all the Nations of the World. We have created Indo Venezuela Film And Cultural Forum and ball has started rolling already. Scholarship, film joint ventures, promoting sites for film shootings, student and faculty exchange program, film festivals etc. is all in pipe line,” said Sandeep Marwah who has been nominated as the Chairperson for Indo Venezuela Film And Cultural Forum recently.

Sandeep Marwah was well appreciated by the Minister of External Relations to initiate the promotion of the relations between two countries through films, art and culture.