Arjun Ram Meghwal is an Indian politician belonging to the Bharatiya Janata Party and former party Chief Whip in 16th Lok Sabha, Currently He is Union Minister of State in Finance and Corporate Affairs in Government of India He has been elected to the 15th and 16th Lok Sabhas from Bikaner constituency Rajasthan in 2009.

He was awarded the Best parliamentarian Award in 2013. Mr. Meghwal doesn’t use the car provided by the government in commuting for work. Instead, he uses his pushbike as a local transport mode.

“I am proud to be associated with NAI and happy to learn how much this organization id doing for the welfare of journalists,” said Arjun Ram Meghwal. 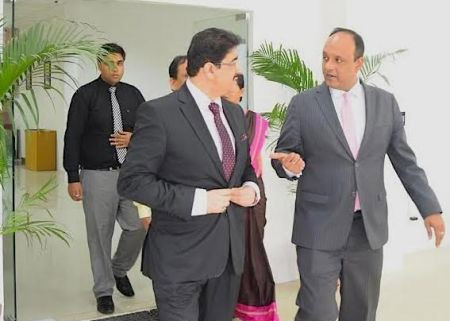 Noida: Rajat Kumar Singh, the Vice President of Oberoi Group attended the special class designed for the students of Asian Institute of Hospitality and Tourism at the new campus.

“The hospitality trade is full of glamour and there is ample scope for growth but it is meant for all those who have passion for this trade. Only hard work and sincerity can last for ever,” said Rajat Singh while answering the questions of the young and enthusiastic students of AIHT.

“The hospitality and tourism trade is increasing in the country but industry has also become cautious about the right manpower. A good knowledge and perfect grooming can take you heights,” said Sandeep Marwah President of AIHT. 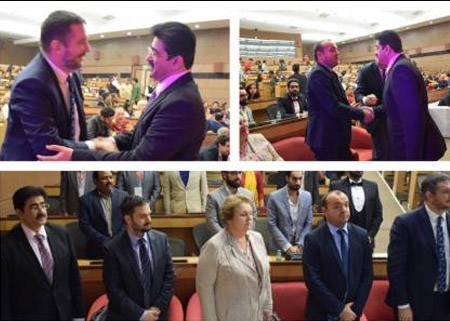 New Delhi: It was a great pleasure to receive the Serbian Ambassador Vladimir Meric along with complete delegation at the 5th DIFF at NDMC Auditorium at New Delhi,” said Sandeep Marwah President Marwah Studios and Chairperson of Indo Serbian Cultural Forum recently constituted by the Ambassador himself.

Visiting Minister from Serbia and Deputy Head of the Mission Dusan Vukic accompanied the Ambassador at the event. “ We are proud that Serbian film is also getting an award at the function. We can have more events of this kind,” added Vladimir Meric Ambassador of Serbia to India.

Indo Serbian Cultural Forum has recently announced a scholarship for the deserving student in Cinema. Film festival of Serbian Films, Join Film Production, exhibition of art from Serbia are some of the next agendas. 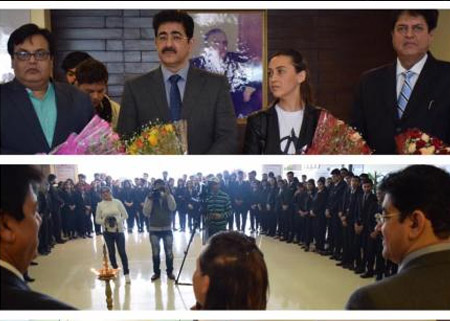 Noida: International Chamber of Media And Entertainment Industry in association with Asian Academy of Arts conducted a world-class exhibition of photography by the renowned Israeli Photographer Idan Maoz and painter Suzana Levi at Asian Business School.

“What a collection of photographs by Idan Maoz of human body painted by another talented artist Suzana Levi is the perfect combination of two major arts,” said Gaurav Dwivedi Vice Chairperson of Uttar Pradesh Film Development Council at the inauguration of exhibition by him.

“Introducing art and culture through photography and paintings to the business students is the right step in building an overall personality of the management student. I admire the way Asian Business School has designed its syllabus which has large space for different activities for the students,” added Vijay Mehta President of Indo Polish Chamber of Commerce.

Indo Israel Cultural Forum of ICMEI is quite active in promoting Indo Israel relations through cultural activities. Earlier also we have invited many film makers, theatre artists, diplomats and painters for interactions. This is an another achievement of ICMEI,” said Sandeep Marwah President of ABS and ICMEI.

Dr Lalitya Srivastava briefed the guest with the achievements of Asian Business School and later handed over the life membership of International Business Research Centre. 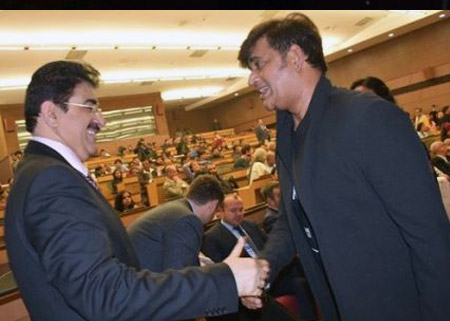 New Delhi: “It was a great occasion to meet the super star of Bhojpuri Cinema Ravi Kishen at 5th DIFF who has actually created a wonderful market for Bhojpuri cinema in north of the country,” said Sandeep Marwah President of International Chamber of Media And Entertainment Industry appreciating the efforts of the renowned actor of many films.

“I am a part of media and entertainment industry and a humble worker of this industry,” said Ravi Kishen at the function and handed over film awards to the film makers participating in the festival.

Sandeep Marwah invited Ravi Kishen to Asian Academy of Film And Television to interact with the young aspirants of filmmaking and cinema students at Noida Film City. 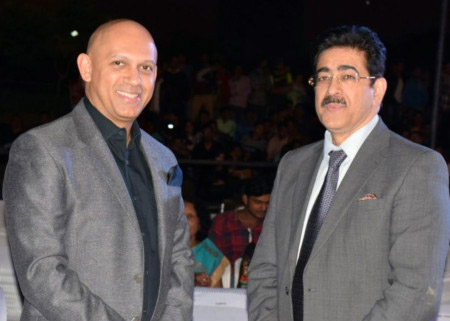 New Delhi: The President of International Chamber of Media And Entertainment Industry Sandeep Marwah recently met the High Commission of Canada to India H.E. Nadir Patel to discuss the opening of new chapter of Indo Canadian relations at ICMEI.

“It will be great to join hands with an international chamber like ICMEI. Next year will be our year of togetherness,” said H.E. Nadir Patel High Commissioner of Canada to India.

We are well prepared to raise the level of relationship and then business between two countries India and Canada through our field of specialization,” said Sandeep Marwah President ICMEI. 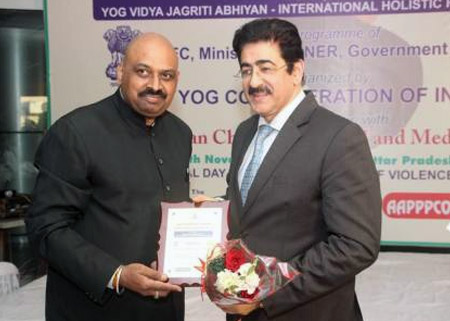 Noida: A special conference was organized by the Indo European Chamber of Small And Medium Enterprises at Noida to felicitate prominent people in the field of social work and Nation building.

“We have with us Sandeep Marwah Global Cultural Minister- our Chief Guest and a great Nationalist who has been a source of our inspiration. Marwah is chairing 100 social, cultural, film, TV, media, sports, educational organizations with almost membership of 2 million people,” said Vijay Tewari President of the Chamber.

“Sandeep Marwah’s activities are connected to more than 100 countries of the World including a lot with Europe. He is five times World Record Holder and his every action is towards World Unity,” added Laxmi Thakur Secretary of the Chamber.

The President handed over a prestigious IECSME Award to Sandeep Marwah in a grand function. “I believe in Karma and know for sure that sincere efforts towards a clear goal will never go waste. Work hard towards growth of the nation,” said Marwah. 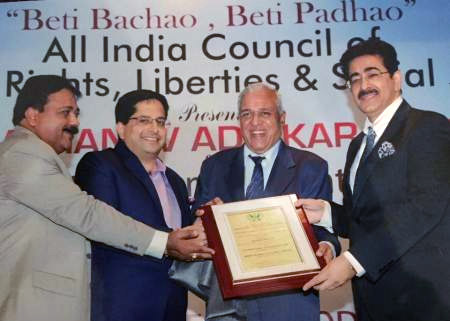 New Delhi: A big celebration took place along with award function at India Islamic Cultural Centre at New Delhi by All India Council of Human Rights, Liberties and Social Justice to observe International Human Rights Day as declared by the United Nations.

Some of the prominent Indians were presented with prestigious Human Rights Award- Bhartiya Manav Adhikar Samman who have contributed to the society immensely.

Sandeep Marwah is a very popular name when it comes to society welfare. His contribution towards betterment of the society is enormous. Today he is chairing 100 social, cultural, educational, media and many other organizations which are worried for the future of this country and deeply involved with the bringing change into the society,” said Dr. Anthony Raju Global Chairperson of the association.

Sandeep Marwah was handed over the award by the renowned educationists in a jam-packed auditorium. “My purpose is to give my best to my media and entertainment industry, my country India and to the humanity,” said Sandeep Marwah thanking for the celebrated award. 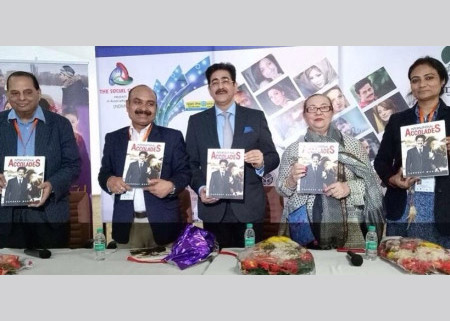 New Delhi: A book on international accolades of Sandeep Marwah was released at the 5th Delhi International Film Festival at NDMC Auditorium at New Delhi.

“Sandeep Marwah is the only Indian with five World Records in Media and Entertainment Industry who has been awarded and honored more than 60 times by 38 countries of the World,” said Ram Kishore Parcha festival President.

Sandeep Marwah has been nominated and has been declared many times as the best film, television and media person available to this industry. Five world Records and continuous support to the industry has brought him titles like Global Cultural Minister, Global Peace Ambassador, Global Green Ambassador, Ambassador of Human Rights, Man of Asia, Icon of The Decade etc.

“I am pleased that a book on my international accolades has been released during the festival. I have always believed that art and culture can bring love, peace and unity in the World,” said Marwah also President of International Chamber of Media And Entertainment Industry.

Many film personalities from all over India and abroad and large number of film lovers and film students attended the event. 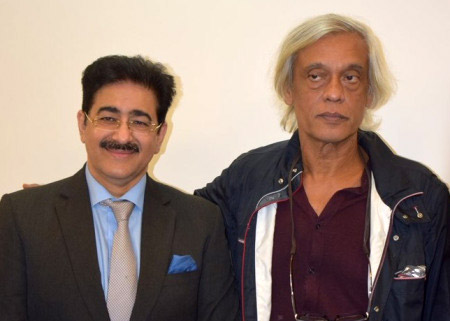 Noida: “Sandeep Marwah has been the back bone of film, television and media business of north India. He has been a big support to all the film festivals and events associated with media and entertainment World,” said Ram Kishore Parcha Festival President of Delhi International Festival.

Sandeep Marwah was the special guest along with Sudhir Mishra at the festival. Ram Kishore briefed him with the details of the 7 days show in Delhi.

“It is always a great pleasure to be part of the events related to media and entertainment. We have spent almost 30 years in developing and building a beautiful film culture in the city of Delhi. It has started giving positive results now,” said Sandeep Marwah President of International Chamber of Media And Entertainment Industry.