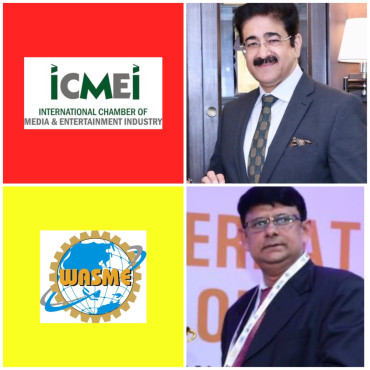 New Delhi: “Enough is enough, no man can stay without entertainment. It has become the part of life you need to bring in colors in your system every day. I am sure that media and entertainment industry is going to bounce back in a much bigger way and people of the industry will for sure recover their loses accrued during pandemic,” said Sandeep Marwah President ICMEI & National Chairman of Media And Entertainment Committee of BIS Ministry of Consumer Affairs, Food and Public Distribution, Government of India at a webinar organized by Careerhub.Edu in association with World Association of Small Medium Enterprises.

For many people who make a living in the entertainment industry, life as they knew it abruptly changed in late March when the spread of COVID-19 forced every aspect of the business to shut down. With movie theatres going dark, concert halls closing their doors, and film sets delaying production indefinitely, the global pandemic essentially brought the multibillion-rupees business to a standstill.

“From a broad perspective, the entertainment industry as a whole has been hit pretty hard. There has never been anything like this that has affected the industry at this magnitude in our lifetime,” said Dr. Sanjeev Layek Executive Secretary of WASME.

The industry is looking the new ways of entertaining the World. Events have been shifted from outdoors to indoors. New applications have replaced the auditoriums. Media education is on line. Meetings, conferences, workshops, interactions, talks, seminars are on web and now film making is looking for another alternatives. 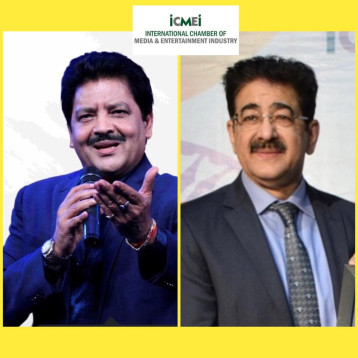 Mumbai: Well-known singer Udit Narayan addressed the students of AAFT University of Media And Arts in a special class on web. The students from all the disciplined were amazed to meet this legendary singer who has been awarded Padma Shree and Padma Bhushan for his untiring work in the field of music.

“Music is life, and I cannot think anything else other than singing. It’s a passion and only those people get success in life who are passionate for their profession. My journey was very difficult, but patience helped me to achieve what I wanted to gain in this music industry,” said Udit Narayan talking to the students of AAFT School of performing arts and other schools.

The awards and appreciations are needed to every artist, but they should bring new blood to your work. I got the opportunity to sing with every music director and for every known hero of the industry. I am thankful to my parents, teachers and everyone one who has supported me in my journey,” said Udit Narayan emotionally.

Udit Narayan is a renowned Indian Playback Singer who has featured in numerous Bollywood films. He has also made a mark with his singing in varoious other languages including Telugu, Tamil, Kannada, Odia, Nepali, etc. He also the recipient of 4 Natonal awards and 5 film fare awards. He has been in singing since 1980 and has sung so far 25000 songs. 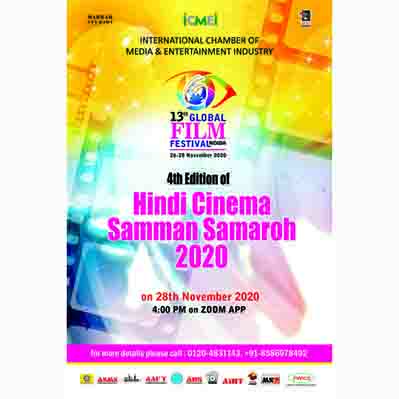 Mumbai: The biggest and the most prestigious award for the Hindi Cinema was constituted four years back when the management of Global Film Festival Noida decided to create an award to appreciate artists and technicians from Hindi Cinema popularly known as Bollywood all over the World at Vigyan Bhawan.

“The 4th edition of Hindi Cinema Samman Samaroh to present Hindi Cinema Samman has been fixed for 28th November this year. Owning to the pandemic the event has been transferred from Vigyan Bhawan to online presentation,” informed Dr. Sandeep Marwah President of the festival.

“We have been inviting and recognizing the efforts of artists and technicians from Hindi Film Industry who all have sincerely contributed to the Hindi Cinema. The award is also meant for foreign governments of different countries who all have supported and promoted Hindi Cinema in their own countries,” added Dr. Sandeep Marwah Chairing the Award committee.

Mumbai: It was decided in the executive council meeting of FFI to project the achievements of members of FFI and the organisation- Film Federation of India, an apex body of Cinema business in the country.

“I propose 52 episodes of television program on MSTV online television station to highlight the achievements of the members of FFI and definitely the mother body Film Federation of India so that people of this country and abroad must realize the growth of Indian cinema. We need not to forget that India is the largest film producing country in the World,” said Dr. Sandeep Marwah President of Marwah Studios and member of the executive council of FFI.

The meeting was being attended by the members from Delhi, Mumbai, Kolkata, Chennai, Hyderabad, Trivandrum, Bangalore, Sikkim and other places. 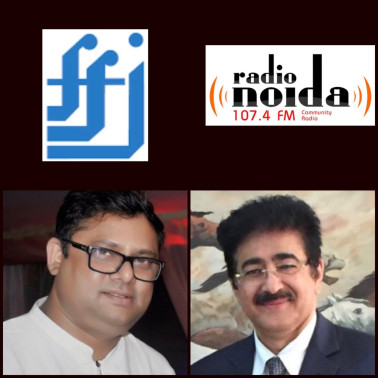 Mumbai: “I am pleased to propose 52 episodes of radio program on Radio Noida 107.4FM to FFI- Film Federation of India, the most prestigious and powerful cinema body of the nation  and its members to speak about their achievements and growth of Indian film Industry,” said Dr. Sandeep Marwah President of Marwah Studios and AAFT during the meeting of executive council of FFI online.

“Radio Noida will be contacting members of FFI one by one on weekly basis and broadcast the recoded program of the members of the federation. Radio Noida is serving around million people in Noida, Delhi, Ghaziabad and Faridabad directly. The radionoida.Fm is transmitting  the same program to the whole world,” added Dr. Marwah who is also member of the executive council of the federation. 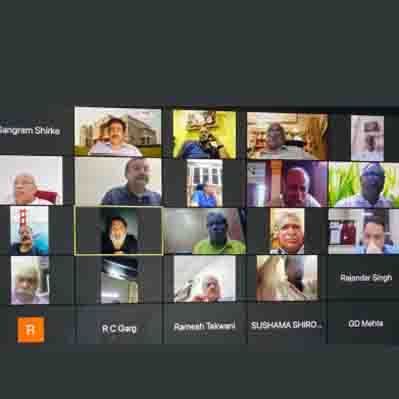 Mumbai: FFI-Film Federation of India is the Apex body in Cinema and Television business in India, is going to support 13th Edition of Global Film Festival Noida 2020 scheduled for 26th to 28th of November. The festival, this time, is going to be online owing to pandemic.

Dr. Sandeep Marwah President of Marwah Studios and AAFT proposed to the members of the governing council of FFI to join hands with this established film festival to make it much bigger with the support of Film Federation of India.

Global Film Festival has planned 12 major events in three days and shall be inviting many foreign filmmakers to share their experience to the film lovers and film students of India and abroad.  “I extend my invitation to each and every member of Film Federation of India especially the members of management committee to please be our guests of honor in 13th GFFN. Your presence will enhance the value of the festival,” said Sandeep Marwah during the meeting.

New Delhi: “What a marvellous collection of poetry by twenty eight known and unknown poets of the country. The collection has been covered under the roof of a book titled Kuch Sunni Kuch Ansuni projecting the correct meaning and expressing itself that these are poetry which are not spoken on many platforms. I wish all the poets a very successful launching of the book and a very bright future,” said Dr. Sandeep Marwah President of Marwah Studios and Chancellor AAFT University of Media And Arts while releasing the book on the third day of Global Literary Festival Noida 2020.

Sushil Bharti welcomed all the poets and spoke about the reason of launching Global Literary Festival. He also spoke about the Writers Club of India created by Marwah Studios to support literary events round the year. Writers Association of India is fulfilling its objectives by publishing books, creating festivals, inviting writers now and then on different platforms to be part of many art and cultural events and developing a powerful library of books,” added Dr. Sushil Bharti.

“A different language is a different vision of life You can never understand the depth of one language until you understand at least two. You should also keep in mind that one language sets you in a corridor for life and two languages open every door along the way,” said Dr. Sandeep Marwah President Marwah Studios while inaugurating the session on the third day of Global Literary Festival Noida 2020

.“Learning another language is not only learning different words for the same things, but learning another way to think about things,” saidVivek Gautam renowned writer and poet who also conducted the program.

“Language is the road map of a culture. It tells you where its people come from and where they are going,” saidDr. B L Gaur who read his poetry in  Brij Bhasha 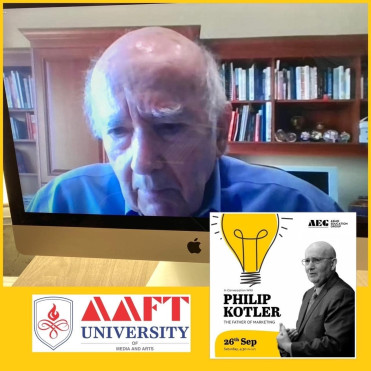 Noida: “The best advertising is done by satified customers. Good companies will meet needs; great companies will create markets. It is more to do what is strategically right than what is immediately profitable. Today you have to run faster to stay in place. The major cause of company failure is company success. Every business is a service business.  your service must bring a smile on the customer’s face,” said Dr. Philip Kotler ‘father of Marketing’ giving some of the best tips while talking to the students of Asian Education Group in a special webinar to teach marketing.

“Good content isn’t about good storytelling. It’s about telling a true story well. Marketing is telling the world you’re a rock star. Content Marketing is showing the world you are one. You can never go wrong by investing in communities and the human beings within them,” expressed Dr. Sandeep Marwah Chancellor of AAFT University of Media And Arts thanking Dr. Philip Kotler for his presence at AAFT.

Philip Kotler is an American marketing author, consultant, and professor. He gave the definition of marketing mix. He is the author of over 80 books including Marketing Management, Principles of Marketing, Kotler on Marketing, Marketing Insights from A to Z, Kotler describes strategic marketing as serving as “the link between society’s needs and its pattern of industrial response

Kotler helped create the field of social marketing that focuses on helping individuals and groups modify their behaviours toward healthier and safer living styles. He also created the concept of “demarketing” to aid in the task of reducing the level of demand. He also developed the concepts of “prosumers,” “atmospherics,” and “societal marketing.” He is regarded as, “The Father of Modern Marketing” by many scholars. The event was supported by Indo American Film And Cultural Forum. 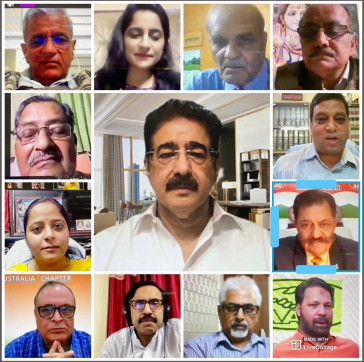 New Delhi: “We are indebted to late Ambassador Shri Beni Prasad Agarwal for being founder of Association of Asian Union- an organization to bring the union between countries of Asia. He had the vision and deep interest in the subject which he tried whole heartedly with the help of his friends and like-minded renowned people of the society,” said Dr. Sandeep Marwah President of Marwah Studios and Patron AAU remembering the great soul.

Wing Commander Praful Bakshi, now the President of AAU spoke about the last achievements of the organization and recollected old memories with Ambassador B.P. Agarwal. “we must take the organization to new heights with our new energy and new ideas. This is the time when we can bring the people of Asian countries together through art, culture, education, tourism, medical facilities, etc. Let us create a strong body to fulfil the desires of late B.P. Agarwal,” said Bakshi.