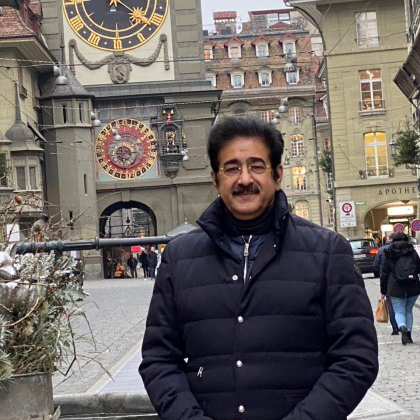 “Sandeep Marwah, seven times World Record Holder, is the founder of Noida Film City. Marwah Studios, Asian Academy of Film and Television. He is the producer of largest number of meaning full- short films. He is also teacher to 20,000 media professionals from 145 countries of the World. and is instrument in attracting 3 million people to Noida Film City. Dr. Marwah is the cultural representative of many countries in India” the citation. Read by Simran Ahuja presenter, actor and model.

“The objective of the Zurich event was to promote the such as brand, Bharat. Overseas and to hail the spirit of Ek Bharat, Shrestha Bharat,” said Smita Srivastava founder and Chairperson of Confluence. Hence Sandeep Marwah Honored in Zurich at Bharat Mahtotsav.

The entire team of Confluence was overwhelmed on receiving virtual good wishes. Hence  From  Meenakashi Lekhi Honourable Minister of State for External Affairs and Culture. In her message, she appreciated the initiatives by the NGO in organising cultural. Business-oriented and knowledge exchange programmes. 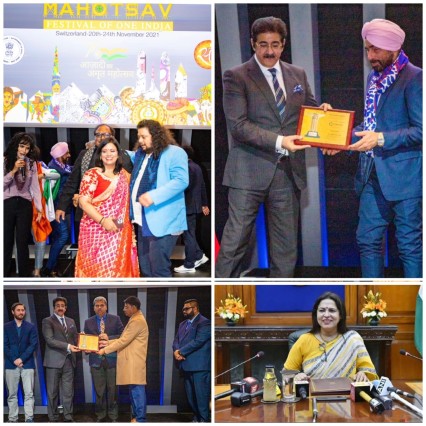 Zurich: Delhi based organization Confluence under the leadership of Smita and Amitabh Srivastava celebrated 75 years of India’s. Bharat Mahotsav at Zurich by Confluence. Independence influenced by Prime Minister’s Azadi Ka Amrit Mahotsav at Zurich in Switzerland. And impressed the swiss audience with the electrifying cultural programs.

The NGO has been organizing these kinds of programs at different cities of India. And abroad earlier also to highlight the history and culture of India. “The objective of the Zurich event was to promote the brand, Bharat, overseas and to hail the spirit of Ek Bharat. Hence Shrestha Bharat,” said Smita Srivastava founder and Chairperson of Confluence.

“The crucial differences which distinguish human societies and human beings are not biological. They are cultural and in fact  cultural differences should not separate us from each other, but rather cultural diversity brings a collective strength that can benefit all of humanity,’ said Sandeep Marwah President of Marwah Studios and Chancellor of AAFT University of Media and Arts at the opening of the session at Hotel Hyatt Zurich.

The entire team of Confluence was overwhelmed on receiving virtual good wishes from  Meenakashi Lekhi Honourable Minister of State for External Affairs and Culture. In her message, she appreciated the initiatives by the NGO in organising cultural, business-oriented and knowledge exchange programmes. 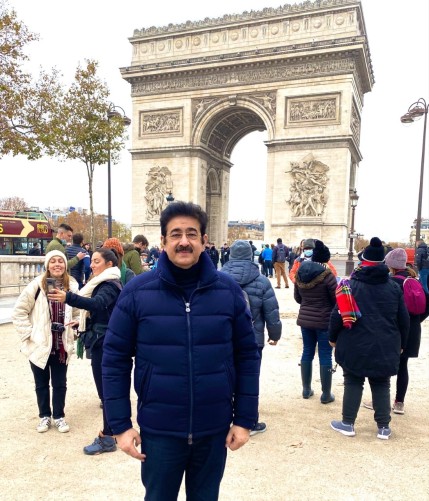 Paris: Every possible brand on earth which Paris is the Capital of Fashion feels it is international, is available in Paris. Look at the people of different parts of the World on the single road walking. With best of the known and unknown brands and adding to the glamour to fashion business. The road itself looks like a ramp show,” said Sandeep Marwah President of AAFT School of Fashion and Design addressing local people of Paris at Hotel Meurice, Rue De Rivoli, Paris, France. 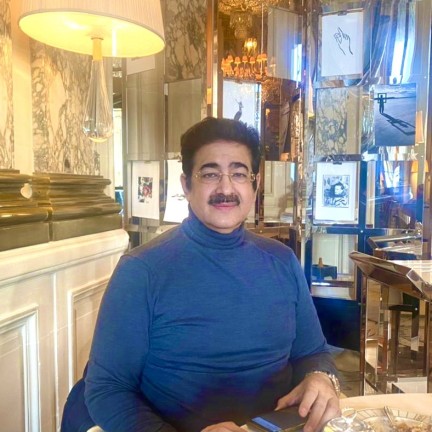 Paris: The pandemic had created immense restrictions as far as tourism is concerned. Sandeep Marwah Visited Paris. Local as well as international tourism have suffered a lot. The trade has suffered loses in billions. With opening of tourism and international airlines. Hotels, airlines, transportation, restaurants have breathed little. I am rather surprised that Paris has picked up very well. And Industry is working in full swing,” said. Sandeep Marwah President Asian Institute of Tourism and Hospitality in a press conference at Hotel Maurice Rue De Rivoli, Paris.

Sandeep Marwah has been also representing as Managing Director of NFTC- National Federation of Tourism and Transport Cooperatives of India Limited. His contribution to Film Tourism is enormous. Thirty years back he gave one word to English dictionary that was Film Tourism. When no one could understand the meaning. And now every country is talking about film tourism.

Hence “Being a founder of Noida Film City we have been able to attract three million people. To film city under film tourism in last   thirty years. This is the 30th year of Marwah Studios,” informed Sandeep Marwah. Hence Sandeep Marwah Visited Paris Local as well as international tourism have suffered a lot. The trade has suffered loses in billions. With opening of tourism and international such as airline. 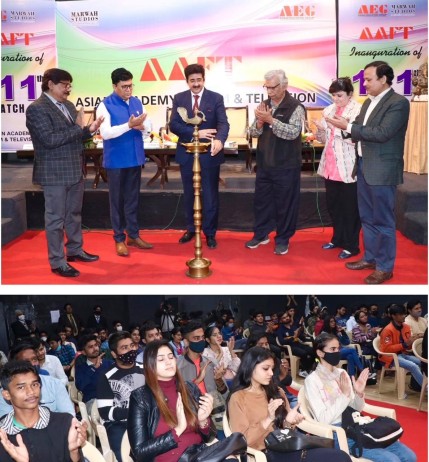 Noida: Another new record created by AAFT – Asian Academy of Film and Television when 111th batch of film, television Media and creative courses. For the young aspirants was inaugurated by Dr. Sandeep Marwah Chancellor of AAFT University of Media and Arts at Noida Film City with great pomp and show.

“Never ever before any institution in the World as ever opened 111th batch of training of film, television and media courses. Today with you all we are creating another World record. We have never worked for awards or rewards, but we have always believed in the theory of Karma. What ever you are going to put in, so you will reap, is a proven fact. Give your best to the industry, the industry will also give you the best in return,” said Dr. Sandeep Marwah founder of Noida Film City & also president of Marwah Studios.111th Batch of AAFT Inaugurated. 111th Batch of AAFT Inaugurated.

“The 111th batch is going to be very lucky as number one comes three times for your promotion. Believe in the institution, education, and your teachers. Hence I promise you that success is bound to come. With new education policy. We are confident, that your education and training is much uplifted,” added Dr. Marwah.

All the faculty members spoke to the young and new students and shared their experience related to their subjects. 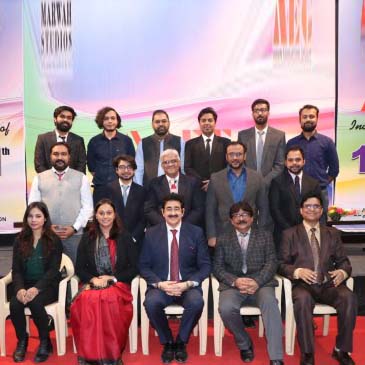 Noida: The new Governing council of AAFT Education Group comprising of short- and long-term courses in different creative fields was reconstituted under the Patronship of renowned media person and president of Marwah Studios Dr. Sandeep Marwah.

“It was long due; we were just waiting for pandemic to get over so that new committee of alumni can be reconstructed to felicitate 15000 students who all have passed from different streams of creative arts in last 28 years of education. It is one of the most interesting job to interact with your alumni,” said Dr. Sandeep Marwah congratulating the newly appointed board.

“We are ready to take the organisation to new level. The new energy, after so many months of pandemic break, will be utilised for supporting the alumni of all the schools under AAFT. I am sure my new team will bring some powerful results in short period of time,” said Akanksha Singh the new President of the organisation.

“We are here to guide the students. Such organizations are strength building exercises. They double the confidence in the current and passed out students,” added Yogesh Mishra the faculty in charge of AAA-Asian Alumni Association. 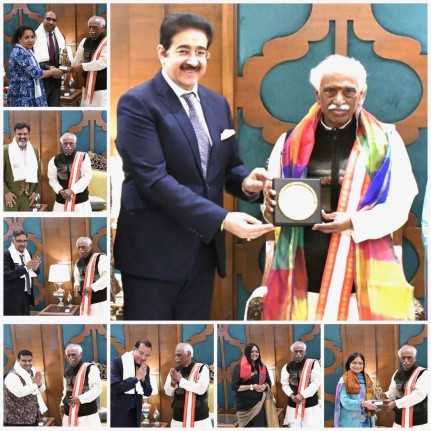 Chandigarh: “I am impressed by the work on national level executed by the members of the delegation belonging to Lions Club of Delhi Veg. They need an appreciation and encouragement to do better and bigger. I extend my heartiest congratulations to everyone present here,” said H.E. Bandaru Dattatreya Governor of Haryana addressing   the set of people visited Raj Bhawan at Chandigarh.

Gaurav Gupta Charter President of the Lions Club of Delhi Veg introduced all the dignities to the Governor and every member got an opportunity to express and speak about their achievements.

Sandeep Marwah the founder of Noida Film City, President of Marwah Studios, Founder Chancellor of AAFT University of Media and Arts and teacher to 20,000 students was honoured by the Governor of Haryana H.E.  Bandaru Dattatreya. Sandeep Marwah is also the producer of largest number of short films in the World. He has designed and conducted more than 5000 events to promote art and culture in India. 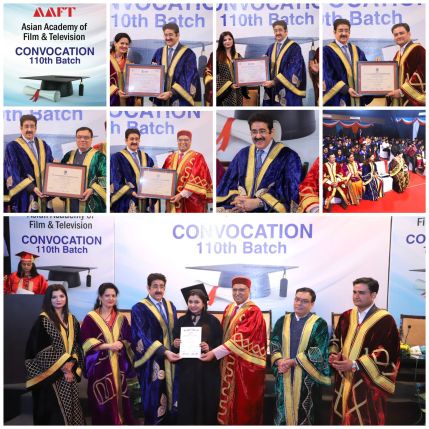 Noida: “We become what we think about, A reminder that positive thinking helps you frame your mindset and change your life. Optimism is the one quality more associated with success and happiness than any other. Let your positivity and optimism inspire you and lead you to success. That’s my favourite way to achieve success,” said Dr Sandeep Marwah Chancellor of AAFT University during the convocation address to the students of short term courses of Asian Academy of Film and Television.

Present on the occasion Vice Chancellor of Starex University Dr. M. M. Goel said,” Never forget the  word gratitude. The kindness and support your parents, teachers and institution has showered on you during your educational days must be repaid in the form of your success in professional carrier”

Veteran Journalist Kumar Rakesh shared his experiences from the field of journalism and said,” Rome was never made in a day. This is one business where you have to first deserve and then desire,” Farheen Khan of Educatio World, Anu Sharma Indian Classical Dancer and Jiternder Sharma President Mentor & Mascot Indian Film Federation also spoke during the convocation.

Later Dr. Sandeep Marwah presented  Life Membership of International Film and Television Club of Marwah Studios to all the dignities. The event was conducted by Akanksha. 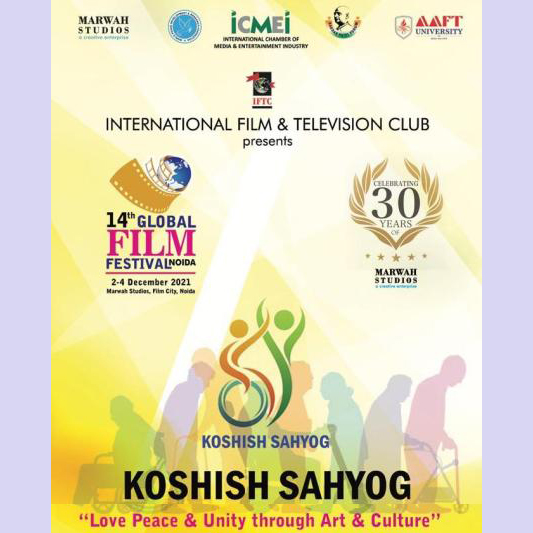 Noida: A voluntary body looking after the needs and requirements of all those who are eyeing for assistance to be like any other human being-Koshish Sahyog was created by Sandeep Marwah join hands with 14th Global Film Festival Noida 2021.

“Disability is part of being human. Almost everyone will temporarily or permanently experience disability at some point in their life. Over one billion people – about 15% of the global population – live with some form of disability and this number is increasing,” informed Sandeep Marwah renowned Educationist and Social worker.

Disability results from the interaction between individuals with a health condition such as cerebral palsy, down syndrome and depression as well as personal and environmental factors including negative attitudes, inaccessible transportation and public buildings, and limited social support.

“People with disability experience poorer health outcomes, have less access to education and work opportunities, and are more likely to live in poverty than those without a disability. Koshish Sahyog has join hands with 14th Global Film Festival Noida 2021 to propagate the vision of the organization and to bring in more kind hearted people to support the cause. 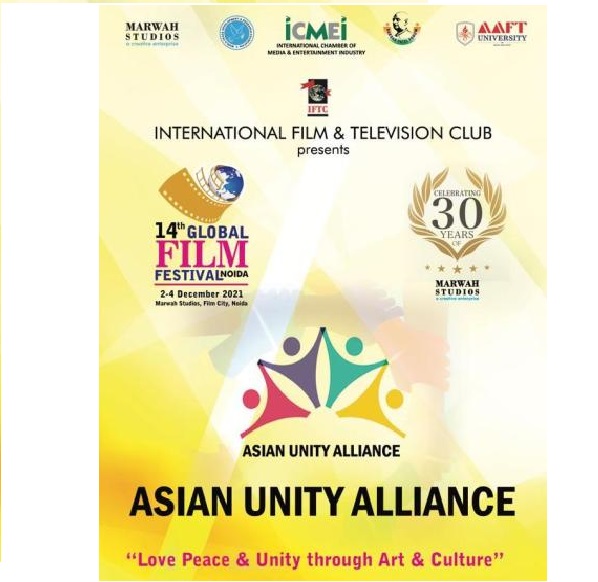 New Delhi: A consortium of fifty cultural forums belonging to fifty different countries of Asia -Asian Unity Alliance join hands with 14th Global Film Festival Noida 2021 to be held from 2nd to 4th December 2021 at Noida Film City to promote Asian Unity among all the countries through art and culture.

An association started in 1993 with the support of Asian Academy of Film and Television and then followed by others like Asian School of Media Studies, Asian Business School, Asian Academy of Arts, Asian Advertising Agency, Asian Alumni Association, Asian Institute of Hospitality and Tourism, Asian Law College etc. has become a source of inspiration for many who are looking for Asian interactions.

The management of AUA-Asian Unity Alliance has decided to involve Embassies and diplomats based in New Delhi, where the headquarters of Asian Unity Alliance is also centered, to invite them to 14th Global Film Festival so that cooperation and understanding can be brought to new level through Cinema.

“We are supporting 14th Global Film Festival Noida whole heartedly and I am sure this will bring some concrete results on the surface of international relations,” said Dr. Sandeep Marwah Chair for AUA.