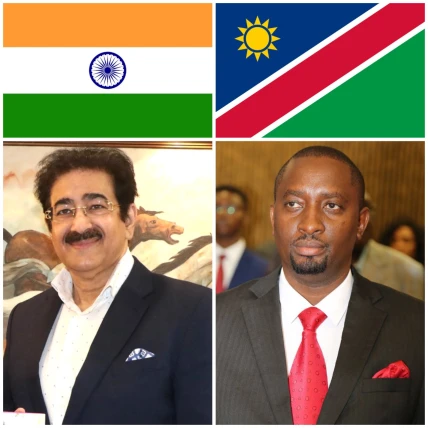 New Delhi: “I on behalf of ICMEI, Indian Media and Entertainment Industry and complete art and cultural fraternity of India take this wonderful opportunity to extend my heartiest congratulations to H.E. Gabriel Sinimbo High Commissioner of Namibia to India and the people of Namibia on the Independence Day falls on 21th March,” said Dr. Sandeep Marwah President of International Chamber of Media and Entertainment Industry at International Headquarters at Noida Film City.

“We are happy as Namibia has been taking part in our most of the international summits, we have been organizing from time to time. Though we have already created a committee on Namibia under ICMEI yet to explore more possibilities in films, art, and culture. Very soon we will be formally open the chapter for more interactions,” added Marwah congratulating Namibians at Marwah Studios.

Noida: “Indian Classical dance is like being a mother, if you have never done it, you can’t imagine how difficult it can be. Classical dance elevates our feelings, makes us speak without words. It is rhythmic expressive elegant and passionate, It makes you beautiful calm and Charming,” said Sandeep Marwah President of Asian Academy of Arts inaugurating the year long dance recital festival at AAFT School of Performing Arts at Noida Film City.

Kathak is the hardest form as one has to convey the dance through hand gestures and feet work. dance is a storytelling process, so the danseuse need to convey the story or Katha through bodily movement.

“Kathak is characterised by intricate footwork and precise rhythmic patterns that the dancer articulates by controlling about 100 ankle bells. It takes its movements from life, stylises them, and adds the complex rhythmic patterns. Kathak is danced by both males and females; many of the dances convey moods of love,” said Guru Jayanti Mala.

The event was supported by International Chamber of Media and Entertainment Industry, World Peace Development and Research Foundation & Asian Unity Alliance. The next show will be planned next 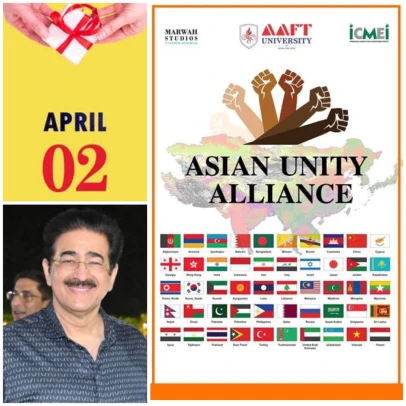 New Delhi: A board meeting of members of Asian Unity Alliance was conducted under the President ship of Dr. Sandeep Marwah to design and frame the celebration of 2nd April 2022 once again as   ‘The Asian Unity Day’ at   International Head Quarters in Noida Film City.

“We are very proud of our organisation, it has done a commendable job and given untiring services to large number of countries which are part of Asian continent since its inception in 1993. The government of many countries have nominated us as their brand ambassador or cultural representative here in India,” said Dr. Sandeep Marwah addressing the core committee of Asian Unity Alliance.

A poster covering all the flags of Asian country was released by Dr. Marwah to mark the respect to every country of Asia. The preparations are on for 2nd April as Asian Unity Day. 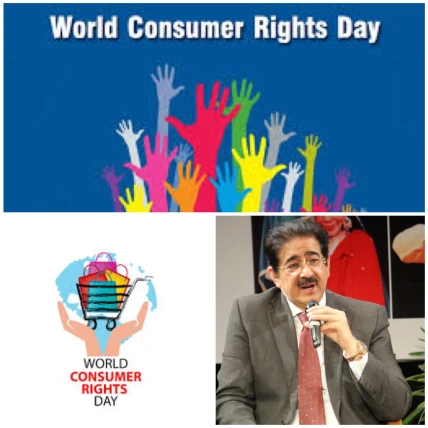 Noida: The consumer movement marks 15th March with World Consumer Rights Day every year, as a means of raising global awareness about consumer rights and needs. Celebrating the day is a chance to demand that the rights of all consumers are respected and protected, and to protest against market abuses and social injustices which undermine those rights.

“World Consumer Rights Day was inspired by President John F Kennedy, who sent a special message  to the US Congress on 15th March 1962, in which he formally addressed the issue of consumer rights. He was the first world leader to do so. The consumer movement first marked that date in 1983 and now uses the day every year to mobilise action on important issues and campaigns,” informed Dr. Sandeep Marwah President of Marwah Studios and Patron to IFUNA- Indian Federation of United Nations Association in a small meeting at Marwah Studios Film City Noida to make people aware about the day.

Dr. Sandeep Marwah is also serving as the National Chairman of Media & Entertainment Committee of BIS, Ministry of Consumer Affairs, Government of India. He has been working on the upgradation of the complete Industry standards to satisfy consumers of the nation. The event was supported by International Chamber of Media and Entertainment Industry. 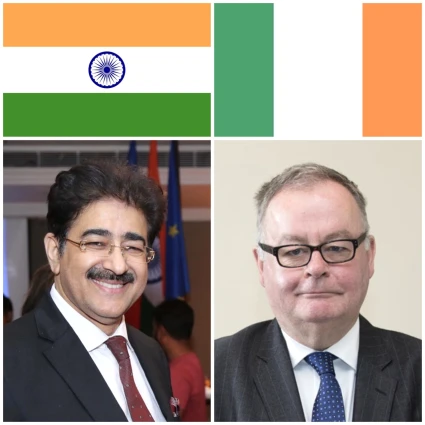 New Delhi: “I on behalf of ICMEI, Indian Media and Entertainment Industry and complete art and cultural fraternity of India take this wonderful opportunity to extend my heartiest congratulations to H.E. Brendan Ward Ambassador of Ireland to India and the people of Ireland on the National Day falls on 17th March,” said Dr. Sandeep Marwah President of International Chamber of Media and Entertainment Industry and Chair for Indo Ireland Film and Cultural Forum at International Headquarters at Noida Film City.

“It was great to attend the National Day at the Embassy lawns when Meenakshi Lekhi  State Minister of External Affairs and State Minister for Culture, Government of India was the Chief Guest on the occasion. The event was well attended by visiting Minister from Ireland Robert Troy TD and large number of Ambassadors and High Commissioners of different countries along with prominent people from business community and art & culture fraternity. 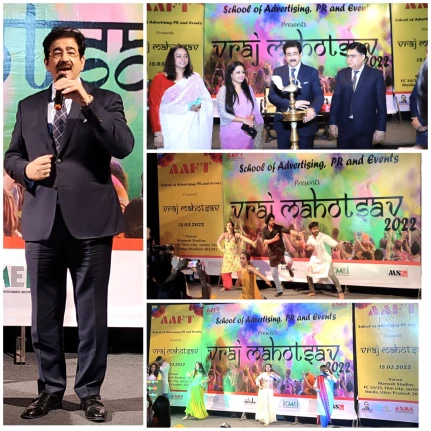 lots of happiness and prosperity to you all. Holi is a special time of year to remember those who are close to our hearts with splashing colours!,” said Dr. Sandeep Marwah Chancellor AAFT University of Media and Arts lighting the ceremonial lamp of inauguration of Holi entertainment program designed by AAFT Colleges at Noida Film City

“H stands for Humanity-Holi teaches us to rise above caste, creed, colour, religion, status, region and trust each other as human beings. O stands for the development of overall personality of person  by meeting all people known and unknown the way we do in Holi, L depicts Love for all age for all human kinds and I reminds you of being Indian,” added Dr. Marwah while addressing the large audience at AAFT eager and anxious to start cultural programs.

The program was devised and conducted by students of AAFT School of P R Events & Advertising and turned out to be  one of the best exercise for the students. The heads of all school were also present there. The event was supported by International Chamber of Media and Entertainment Industry, World Peace Development and Research Foundation, Asian Unity Alliance and  Prithvi Yoga Centre. 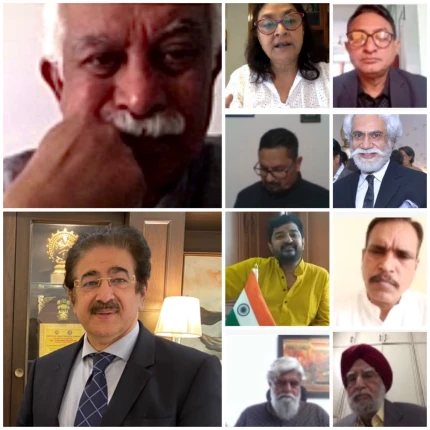 New Delhi: Sandeep Marwah Informed About M&E Upgradation Committee of Government. “This just to inform you about the media and entertainment upgradation. Committee of Bureau of Indian Standard under Ministry of Consumer Affairs, Food and Public Distribution. Where all the segments  taken into account including education in media and entertainment industry. I am happy to coordinate it through another important committee in AICTE in ministry of Education,’ said Dr. Sandeep Marwah also member of Board of Applied Arts Crafts & Design in AICTE Ministry of Education, during board meeting.

It is suggested that courses related to films and television now can be given AICTE approval for better creditability. Some of the prominent people from the creative World attended the meeting at AICET Board of Applied Arts Crafts & Design. Sandeep Marwah Informed About M&E Upgradation Committee of Government.

Dr. Sandeep Marwah is the National Chairman for Still Media and Entertainment Upgradation Committee BIS Ministry of Consumer Affairs Food and Public Distribution, Government of India. constituted for the setting up the standards for all the segments of media and Entertainment Industry including such as Print, Radio, Television, Cinema, New Media, Events, Music and Education. Hence f Board of Applied Arts Crafts & Design in AICTE Ministry of Education, during board meeting. 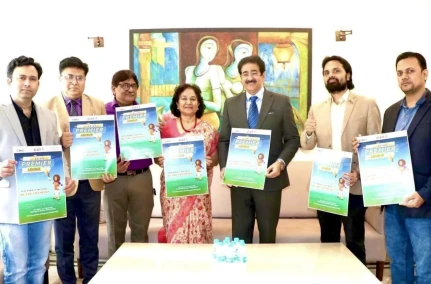 Noida: First Poster of Asian Premier League 2022 Launched at AAFT. A well designed poster, representing a powerful sports week for the students of AAFT -Asian Academy of Film and Television. And all the departments of ASMS- Asian School of Media Studies. Hence Under the name and such as banner of Asian Premier League 2022 was launched by Dr. Sandeep Marwah Chancellor of AAFT University of Media and Arts at International Headquarters of ICMEI at Noida Film City.

“Sports are about those incredible moments where sheer human will and desire overcomes the odds. These are the moments we remember. A trophy carries dust. Memories last forever. The five S’s of sports training such as stamina, speed, strength, skill, and the greatest of these  spirit,” said Dr. Sandeep Marwah while releasing the poster.

The event will take place at Marwah Studios and Noida Stadium from 29th to 31st March. More than 500 sports person are participating in 9 different games. The rewards and results  declared on the final day. Hence First Poster of Asian Premier League 2022 Launched at AAFT. 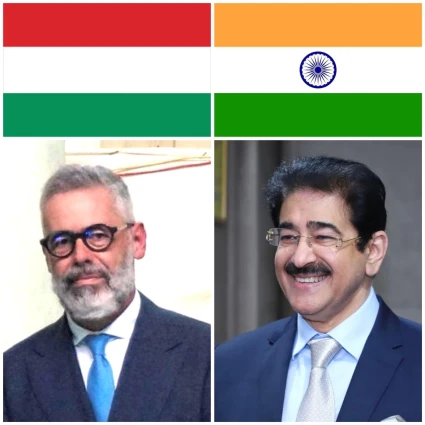 New Delhi: “I on behalf of ICMEI, Indian Media and Entertainment Industry and complete art and cultural fraternity of India take this wonderful opportunity to extend my heartiest congratulations to H.E.  Andras Laszlo Kiraly Ambassador of Hungary and the people of Hungary on the National Day falls on 15th March,” said Dr. Sandeep Marwah President of International Chamber of Media and Entertainment Industry and Chair for Indo Hungarian Film and Cultural Forum at International Headquarters at Noida Film City.

It was way back in 2013 Indo Hungarian Film and Cultural Forum was formed during the visit of Sandeep Marwah to Budapest. The forum was inaugurated at Villayn Town by  Gyula Takats the elected Mayor of Town Villany. The event took place at one of the most popular restaurant F.UlemuleCsarda in the presence of Oscar winning director Jiri Menzel. Gobor Kindl festival director of Shoot4Earth Jeno Hodi Chairperson of Budapest Film Academy, Szel Moni of Pixel TV, Kovesdi Szilvia and Fatima of Halasi Pince Panzio the hostess of the event, Prof. Karl Bardosh of New York University, Albert Marsalko Peter of Marsalko Foto a digitalis Valosag and others also opted for the membership and were witness to this historical event.

He was also honored at James Cinefest Miskolc International Festival by Tibor Biro, the festival director and Dr. Akos Kriza, Mayor of the City. Dr. Marwah was also appreciated and honored by Director Jeno Hodi at Budapest Film Academy, Another award he was presented by Ferenc Borbely renowned actor Film & TV Producer and Indian Ambassador to Hungary H.E. Kumar Tuhin on behalf of Hungarian Film Fraternity.

Marwah was also presented an award being co-president of the festival by Dr. Phd. Kiss Robert Richard renowned journalist at the time of first Cellphone Cinema festival. The Indo Hungarian Film And Cultural Forum Budapest also presented an award for his untiring contribution to the development of Indian Hungarian relations by Edit Osko, Boldizsar Peter and Judith Rachel Lazar. Recently he was also appreciated by the Terry Macluhan during Shoot4Earth 2021. 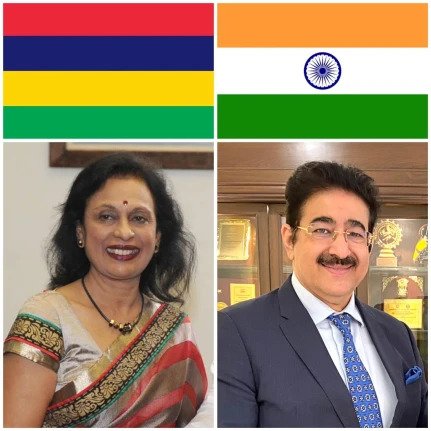 New Delhi: “I on behalf of ICMEI, Indian Media and Entertainment Industry and complete art and cultural fraternity of India take this wonderful opportunity to extend my heartiest congratulations to H.E. Shanti Bai Hanoomanjee High Commissioner of Mauritius and the people of Mauritius on the Independence Day falls on 12th March,” said Dr. Sandeep Marwah President of International Chamber of Media and Entertainment Industry at International Headquarters at Noida Film City.

The idea of starting Indo Mauritius Cultural Forum was generated when Dr. Sandeep Marwah met the former Prime Minister of Mauritius Dr. Anerood Jagnauth during his visit to India and briefed him about the activities in relations to Mauritius at Marwah Studios.

The country of Mauritius has been a regular participant in all the  international events, festivals, summits we have been organising from time to time. Indo Mauritius Film and Cultural Forum has grown big in all these years.