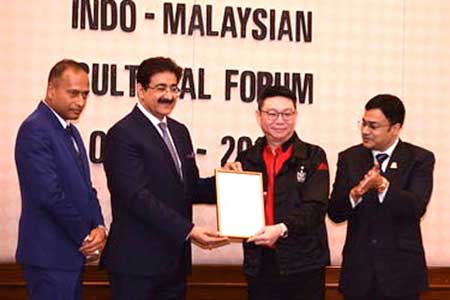 Kuala Lumpur: International media personality Dr. Sandeep Marwah was honored with the most prestigious award for the entertainment industry of Malaysia today at Kuala Lumpur in a grand function.

Dr. Sandeep Marwah has already been titled many times for his untiring contribution to media and entertainment Industry. The credit of   founding the first ever dedicated Chamber of Commerce ICMEI also goes to him. Single handed he has tied up with Entertainment industries of more than 50 countries of the World,” added Dr. Haque.

The most prominent & respected Entertainment And Movie Icon Award was handed over by Dato’ Alan Foo Managing Director of Star Planet SDN BHD to Dr. Sandeep Marwah before the august audience consisting of Film, TV, Media, Art and Culture fraternity.

“I am thoroughly indebted to Malaysian Entertainment industry for considering me for such a admired award. I am touched by this gesture and I assure you that I will never forget this evening in my life,” said Dr. Sandeep Marwah popularly known as Global Cultural Minister.