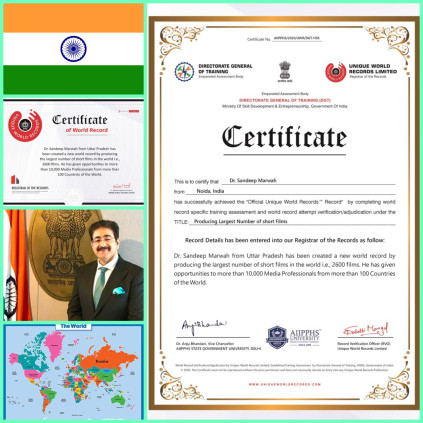 New Delhi: The Third World Record of Sandeep Marwah has been approved by the governing council of Unique Book of Records and issued the final certificate after verification the details submitted by him.

“I am very happy that my third World Record in media has attracted many and I have been receiving massages from all over India and abroad. I have always believed in continuous working for films, television and media. Ask nearly any successful person and they’ll say hard work helped them achieve their dreams and goals. Working hard is often the difference between success and failure, but is also a rewarding pursuit in itself. Work and you’ll get what you need; work harder and you’ll get what you want,” said Sandeep Marwah thanking everyone who all have contributed to this International record.

The Certificate reads record as-“Dr. Sandeep Marwah from Uttar Pradesh has created a new World Record by Producing largest number of short films in the World i.e. 2600 films. He has given opportunity to more than 10,000 media professionals from more than 100 countries of the World in these films”.